Looking Down To Improve The View From Above

Researchers are working to improve the quality of data collected by satellites more than 500 miles above the ocean. Their goal: determining how microscopic algae, also known as phytoplankton, absorb and scatter light, and how the colors of the phytoplankton can be better identified and measured. 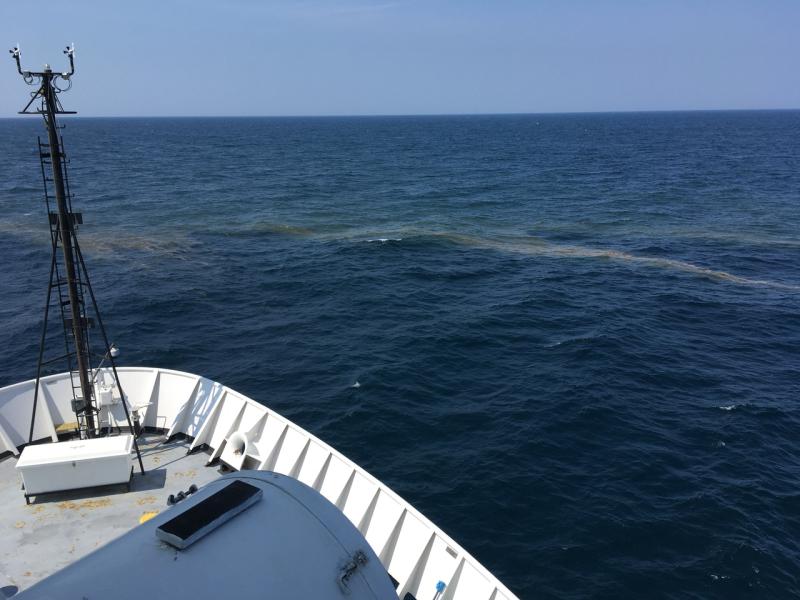 For the next three years, researchers from NOAA Fisheries and colleagues at the University of Rhode Island, NOAA’s National Environmental Satellite, Data and Information Service, and Woods Hole Oceanographic Institution will look into the ocean to help improve the quality of data collected by satellites more than 500 miles above. 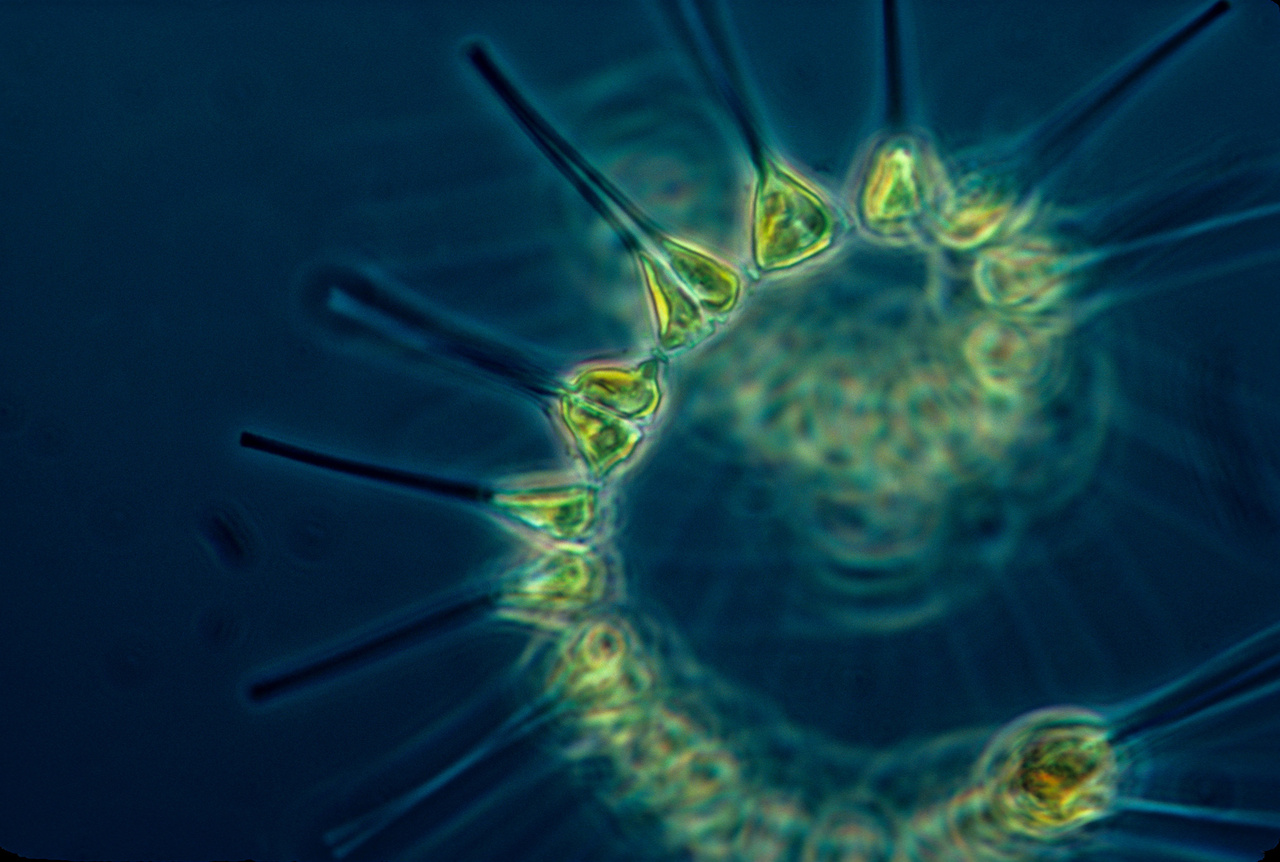 Their goal: determining how microscopic algae, also known as phytoplankton, in the ocean absorb and scatter light, and how the pigments or colors of the phytoplankton can be better identified and measured by satellite sensors.

“The goal is improving our ability to measure different sizes and types of phytoplankton from satellite sensors,” said Kimberly Hyde, an oceanographer at the Narragansett Laboratory of NOAA’s Northeast Fisheries Science Center (NEFSC) and project leader. “Phytoplankton are the base of the marine food web. Understanding how phytoplankton communities are changing is of critical importance to managing sustainable fisheries and ocean health.”

The team from the University of Rhode Island team will collect water and continuous optical data, and Woods Hole Oceanographic Institution researchers will observe phytoplankton samples during six NOAA Fisheries Ecosystem Monitoring Survey cruises, known as EcoMon, over the next two years. Their first cruise took place aboard the NOAA Ship Gordon Gunter in August. The second cruise began November 1 on the R/V Hugh R. Sharp, operated by the University of Delaware, and will conclude November 14.

Samples are collected as part of the regular EcoMon surveys, which take place six times a year over the northeast U.S. continental shelf from Cape Hatteras, North Carolina, to Cape Sable, Nova Scotia. Two EcoMon surveys are conducted jointly with the Northeast Fisheries Science Center’s bottom trawl surveys in spring and autumn on the NOAA Ship Henry B. Bigelow. The other four surveys in winter, late spring, late summer and late autumn are dedicated to plankton and hydrographic data collection.

Researchers from the Northeast Fisheries Science Center have been collecting plankton and hydrographic data in waters off the Northeast U.S. coast six times a year since the early 1970s. EcoMon is one of the longest continuous programs at the center, which has also conducted the spring and autumn bottom trawl surveys each year since the 1960s.

One of the instruments researchers use to collect light data is a radiometer, which has sensors that look both up towards the sky and down into the water. This allows data to be matched with what the satellites record as they pass over the sampling station.  Other instruments aboard ship continuously measure how light is absorbed and scattered by particles in the water. These observations will be compared with the automated Imaging FlowCytobot data, which identifies different types of plankton and measures the size of its cells. Seawater samples are also being analyzed in laboratories ashore to measure phytoplankton pigments and nutrient concentrations. 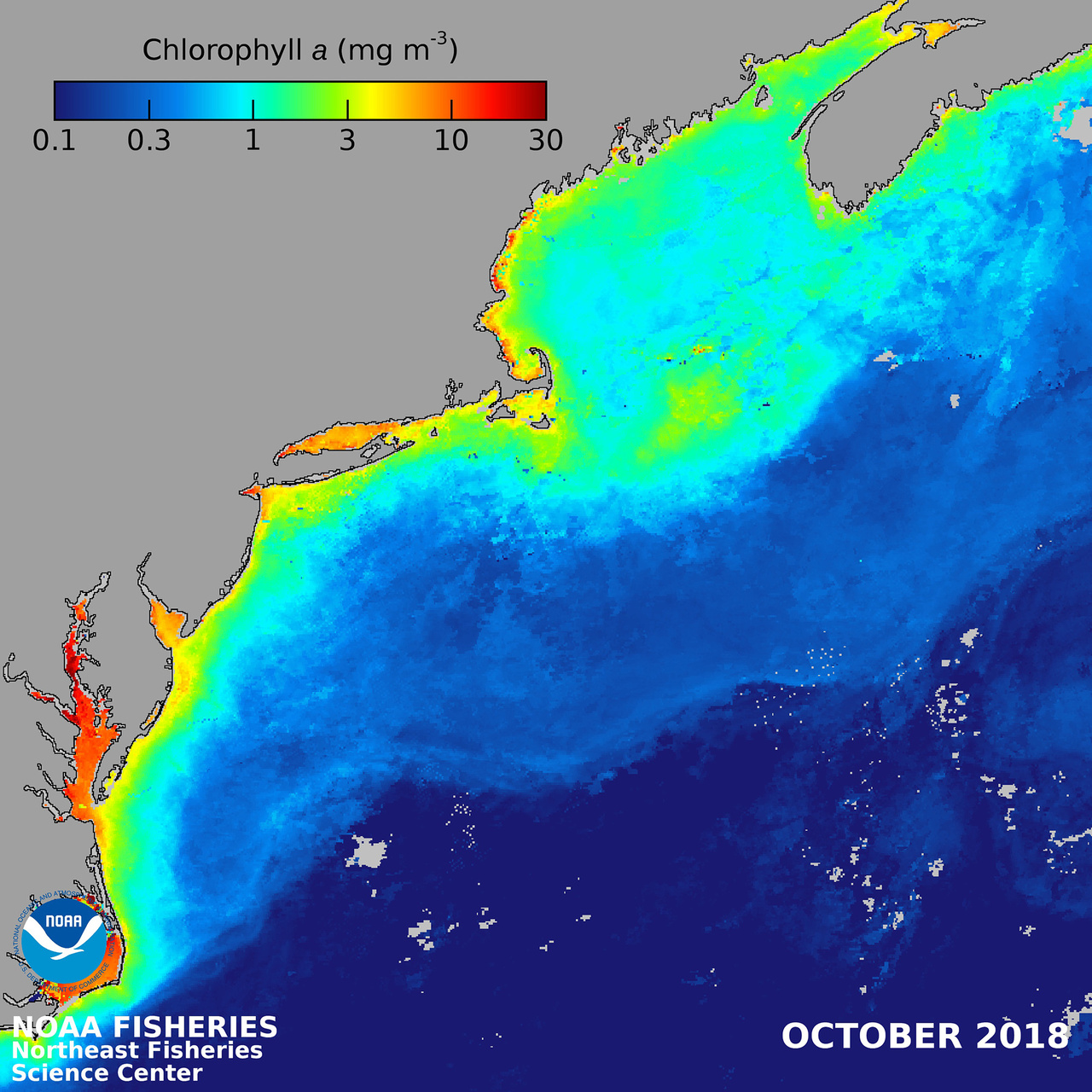 “We are measuring the optical properties of the ocean in order to determine how the particles in the water absorb and scatter light,” Hyde said.  “These optical measurements will be used in conjunction with measurements of phytoplankton pigments and with images of the phytoplankton community to develop regional algorithms to detect phytoplankton composition from satellite sensors. In simple terms, we are measuring and monitoring ocean color, which is an indicator of the health of the ecosystem. ”

“The collection of continuous optical data and coincident phytoplankton composition across the dynamic range found on the northeast shelf will be invaluable in developing well-validated satellite estimates of phytoplankton size composition and functional groups,” said Colleen Mouw, an assistant professor of biological oceanography at URI’s Graduate School of Oceanography and co-principal investigator on the project.

“Ultimately, through the development and tuning of algorithms specific to the Northeast Shelf, we will create a time series of phytoplankton functional groups that will be used as inputs for ecosystem models as the base of the marine food web,” Mouw said.

The project is funded by the Joint Polar Satellite System (JPSS) Proving Ground and Risk Reduction Program, established in 2012 by NOAA and NASA to develop new applications for data from the nation’s new generation of polar-orbiting environmental satellites, and to improve the quality of the data collected. JPSS polar orbiting satellites circle the earth from pole to pole and cross the equator about 14 times daily, providing full global coverage twice a day. In the process, they gather global measurements of atmospheric, terrestrial and oceanic conditions, including sea and land surface temperatures, vegetation, ocean color, clouds, rainfall, snow and ice cover, fire locations and smoke plumes, atmospheric temperature, water vapor and ozone.

Among the users of the satellite data are NOAA’s National Weather Service, National Ocean Service and NOAA Fisheries as well as the National Environmental Satellite Data and Information Service, which monitors volcanic eruptions, wildfires and changing sea ice concentrations in real-time. Other federal agencies, from NASA and the Department of Agriculture to the EPA, U.S. Forest Service and the U.S. Geological Survey, and international meteorology organizations also use the JPSS satellite data.