Oceanic measurements collected during a scientific cruise on NOAA ship Ronald H. Brown last week confirmed that a large area of poorly oxygenated water (known as hypoxia) is growing off the coast of Washington and Oregon. 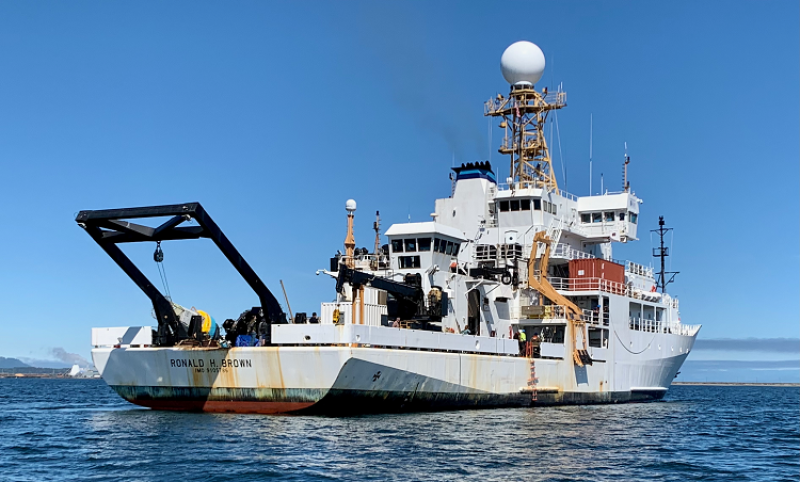 Oxygen-depleted bottom waters occur seasonally along the continental shelf of Washington and Oregon when strong winds blowing along the coast in spring and summer trigger upwellings that bring deep, cold, nutrient-rich water to the surface. These waters fuel blooms of plankton. The plankton in turn feeds small animals like krill which themselves serve as food for many fish. When these blooms die off, they sink to the bottom, where their decomposition consumes oxygen, leaving less for organisms, such as crabs and bottom-dwelling fish.

“Low dissolved oxygen levels have become the norm in the Pacific Northeast, but this event started much earlier than we've seen in our records,” said Oregon State University Professor Francis Chan, director of the NOAA cooperative institute CIMERS. “This is the earliest start to the upwelling season in 35 years.”

Returning to port from the NOAA-sponsored West Coast Ocean Acidification Cruise, Richard Feely, an oceanographer with NOAA’s Pacific Marine Environmental Laboratory, said that dissolved oxygen and ocean acidity measurements are consistent with an event that has the potential to create “dead zones” later this summer. Dead zones occur when dissolved oxygen levels drop so low that crabs and other bottom-dwelling fish perish.

The last time scientists observed winds this strong was in 2006 when a large dead zone wiped out crabs and other bottom-dwelling marine life along the continental shelf, Chan said.

Concerns about this summer first arose in March, when a NOAA wind measurement station observed an early shift in winds that initiate upwelling. Winds strengthened in April when the first measurements of hypoxic conditions were recorded. In late May, a NOAA Fisheries survey off Washington and Oregon found large phytoplankton blooms and hypoxic conditions on the continental shelf in the area of Grays Harbor, Washington. At about the same time, beachgoers reported large numbers of dead crabs washing ashore in the area of Ocean Shores, Washington. In early June and again in July, samples along the Newport Line, a long-term monitoring transect off Newport, Oregon, also showed hypoxic waters.

The West Coast Ocean Acidification Cruise left port June 13 for its 45-day mission sampling along several transects from British Columbia to California. Supported by the NOAA Ocean Acidification Program, this recurring scientific cruise surveys ocean conditions for a host of environmental parameters to better understand the factors that influence ocean acidification and hypoxia, which are related. Scientists obtain measurements from a suite of sensors and floats and collect plankton and other sea life in net trawls.

During the cruise, NOAA ship Ronald H. Brown navigates a series of straight lines running from the edge of the continental shelf to the coast, allowing scientists to take regular measurements along the way. Feely said the scientists observed the hypoxic layer on all of the Washington and Oregon transect lines. While there are no measurements between those transect lines, he said the hypoxic layer likely covers the continental shelf region from the Olympic Peninsula in Washington to Heceta Bank on the central Oregon coast. Measurements did not indicate a hypoxic layer in Canadian transects or northern California.

A Surprise in a Plankton Net

One discovery on this cruise has Feely and fellow scientists anxious to get back into the laboratory. In U.S. waters, a plankton net retrieved vertically from depths of 100 meters surfaced with a large amount of a greenish-black substance in the finely woven fabric of the net. Feely suspects the net was towed through a thick layer of decaying plankton in the water column, the kind of thing responsible for creating hypoxic conditions.

“We added a little alcohol to the sample, and we began to realize that it was a large mass of phytoplankton, either still living or dead, sinking into the deeper water and possibly providing the fuel for the oxygen uptake as it decays,” he said. Samples will be taken back to Seattle for examination under a microscope.

Meanwhile, indications are that the hypoxic waters in Oregon and Washington will persist and perhaps intensify. An important coastal model called J-SCOPE, developed by the Cooperative Institute for Climate, Ocean, and Ecosystem Studies, or CICOES, NOAA’s cooperative institute with the University of Washington, predicts a large hypoxic zone will remain through fall.