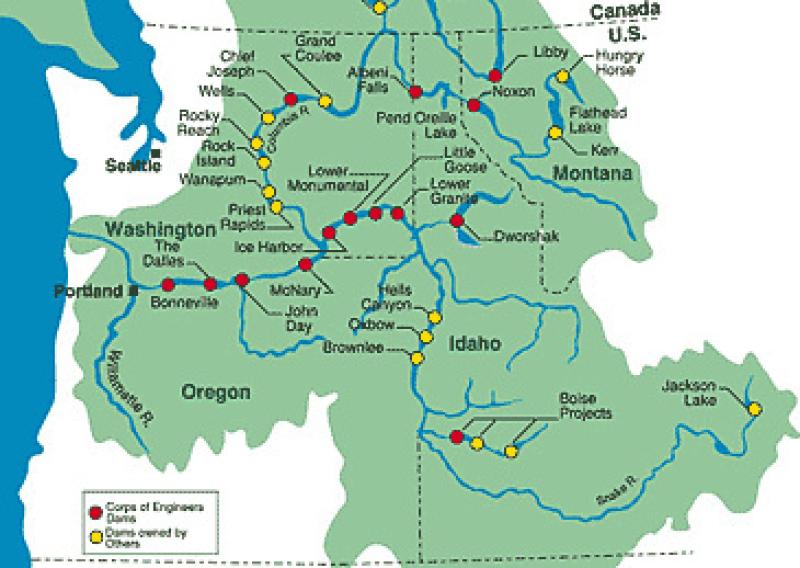 As of July 6, approximately 326,176 adult Chinook salmon (of both hatchery and wild origin) passed Bonneville Dam during their return to spawn in the Columbia River. These returns are over 140% above the 10-year average, marking 2010 as one of the best years for Chinook since the dam was built in 1938.

Over the past decade, fishery scientists have counted a median of 183,500 Chinook returns annually—almost three times higher than counts in the 1990s, when 12 steelhead and salmon populations in the Columbia Basin were given protection under the Endangered Species Act.

A number of reasons may have collectively contributed to these recent increases: juvenile salmon encountered favorable ocean conditions in 2007 and 2008, and the region has made marked improvements to freshwater rearing habitat and hatchery practices. In addition, fish-friendly improvements to the Columbia Basin’s hydroelectric dams may have also played a role.

This pattern of improved returns applies to other salmon species as well.

Virtually all Columbia River sockeye are wild-origin fish, originating predominantly from Canada’s Osoyoos Lake, with a smaller proportion being produced from Lake Wenatchee. A small number of fish have returned to the Snake River over the past 2 decades, with an increase in 2008 and 2009, but virtually all of these fish were of hatchery origin.

An ocean survey, conducted by fishery biologists in late spring, hinted at good returns in coming years as well, according to John Ferguson, Director of the NWFSC’s Fish Ecology Division.

“We caught a lot of young salmon in our ocean sampling during May,” Ferguson said, “which is always a good indication that we may see good numbers of returning adults next year and the year after if ocean productivity holds.”

To aid salmon managers, Center scientists annually assess ocean conditions that juvenile salmon experience based on atmospheric indices in the North Pacific Ocean and equatorial waters, local sea surface temperatures, salinity and upwelling strength, and local biological features such as the type of zooplankton community in Pacific Northwest waters and the number of juvenile salmon observed as they enter and migrate to ocean habitats.

“Interestingly, we also captured an unusually high number of juvenile sockeye salmon, which were likely from the large number emigrating from the upper Columbia River this year,” said Ferguson.

Steelhead counts are also making a splash as they have started entering the Columbia River. Over 50,000 hatchery-raised and 22,497 wild steelhead have been counted at Bonneville Dam as of July 6, setting a new record.