American shad are lucky to have Carl Alderson as their steadfast champion. For the past decade, Carl has been restoring habitat for them and other migrating fish in the northeastern United States. 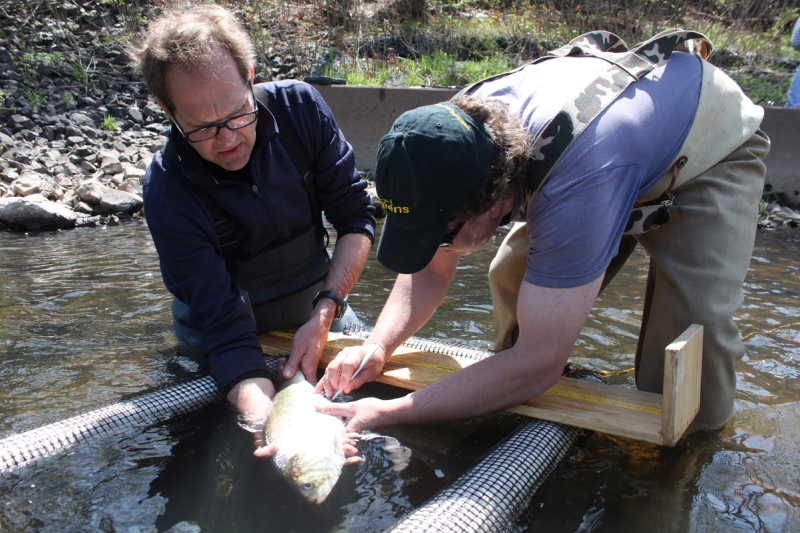 Carl Alderson has been involved in multiple dam removals helping shad (and their cousins, alewife and blueback herring) along with American eel, to return in larger numbers each year. His work includes restoration of the Raritan River, New Jersey’s largest interior watershed and the location of multiple, major hazardous waste sites now in recovery. He has a great understanding of migrating fish, such as the American shad, alewife, blueback herring, and American eel. We can all be grateful that we have Carl Alderson on the NOAA Restoration team. 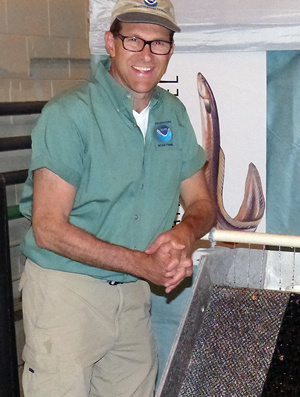 My goal is to return migratory fish back into their native waterways. When we remove a dam, we create access to more miles of spawning habitat. But there’s more to it: we can also restore  more natural sediment flows and alter the complexity of the river bottom. We can manipulate the river's physical characteristics to create a cooler and swifter environment. We often recreate the original rock riffle fields that we associate with rivers coming out of the Piedmont that further downstream become the estuaries of the coastal plain. Recreating fast moving water over the cobbly bottom increases dissolved oxygen, and that’s so much better for the shad and the organisms they eat. You have to support the types of food that larval and young fish eat—high-quality food that helps them grow fast.

We’ve been monitoring Raritan River migratory fish runs for 10 seasons, and it’s a thrill to see the breeding adults return in the spring. So far, NOAA and its partners have removed six dams in the watershed. We’re working to improve or replace a fish ladder that doesn’t move fish as well as it could. In the summer of 2017, NOAA and our partner organizations removed the Weston Mill Dam, and we have our eyes on the next few dams upstream. Shad haven’t been seen on some of these tributaries in more than 200 years.

There are many organizations, volunteer groups, and individuals who care deeply about this river. We work with many partners in this effort, including our Natural Resources Damage Assessment and Restoration trustees at the New Jersey Department of Environmental Protection and U.S. Fish and Wildlife Service.

There is Rutgers University, who developed the Sustainable Raritan River Initiative to bridge Public Policy and Environmental Science programs. The Initiative connects us to the University and the greater Raritan community. That  includes state and local government, plus nonprofits like The Watershed Institute, Duke Farms, American Rivers, New York New Jersey Baykeeper and the Raritan Riverkeeper.

Everybody contributes something. And local anglers, too, are enthusiastic supporters. They post their pictures online, and I’ve seen them showing off striped bass WAY up the river where they haven't been caught in years!

Were you ever surprised by fish and/or habitat?

I was literally shocked by a harbor seal who fell asleep next to me on a rocky beach in the San Juan Islands in Washington State. But within my own restoration projects I've been surprised by so many things.

I’d have to say that’s Mike Feller, retired Chief Naturalist of the New York City Department of Parks & Recreation. He’s a mentor, colleague and friend going back many years. I was privileged to work with him, and for the City of New York earlier in my career. We completed  groundbreaking work on a Staten Island oil spill where we used plants to catalyze and stimulate naturally occurring petroleum-eating bacteria. Mike forged his insights on the natural world through a ritual of daily observation. Mike impressed upon me the subtle difference between seeing and understanding.

Last updated by Office of Habitat Conservation on July 08, 2020