With a focus on a recent stranding event in Kailua involving a lone calf. 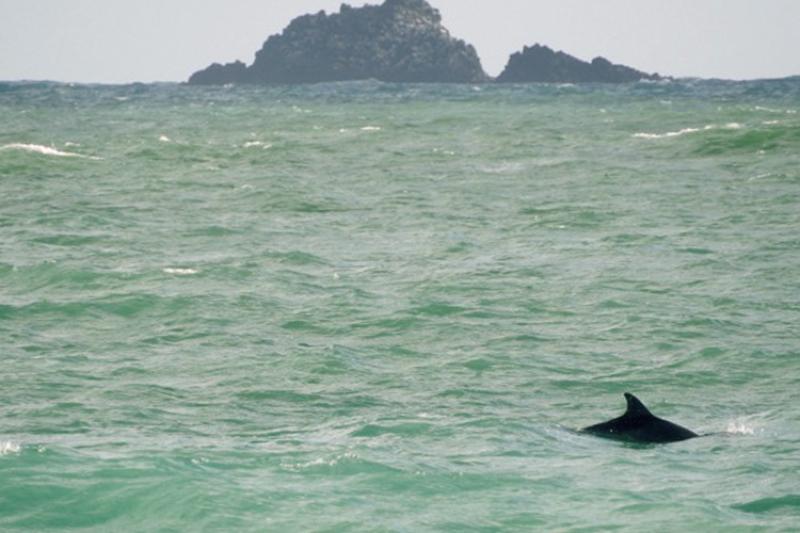 Melon-headed whales (Peponocephala electra) are members of the oceanic dolphin family. They can reach a length of nine feet and weigh about 460 pounds. Melon-headed whales in Hawaiian waters can be found in groups of up to several hundred animals.

Based on photo ID, satellite telemetry tag, and genetic research, we believe there are two populations of melon-headed whales in Hawaii — a large population that moves frequently among the islands that utilizes deep waters (∽1400-1800 meters depth), and a small population resident to the island of Hawaii that uses shallower waters (∽150-400 meters).

Melon-headed whales are closely related to false killer whales, short-finned pilot whales, and pygmy killer whales, all of which are found in Hawaiian waters. They are highly social and feed on fish and squid in the mesopelagic zone (between 200 and 1,000 meters depth). Melon-headed whales in Hawaii spend much of their time during the day logging at the surface resting. There is some evidence suggesting that this species is sensitive to high-intensity underwater sounds.

On September 17, 2016, a lone calf was found free swimming off Kalama Beach Park on the Hawaiian Island of Oahu. The calf, approximately 5 1/2 ft long, was likely still associated with its mother and from visual assessment showed signs of malnutrition. After careful consideration of all factors related to the case at hand and previous cases (see below), it was determined that any rescue intervention would not be successful. Any attempt to capture or move the whale would put it at further at risk because it was already under significant stress and its health was likely significantly compromised. Even if the whale could have been captured for rehabilitation, the chances of long-term survival were exceedingly low (see below). With sharks sighted in the area, there was also a human safety concern. In addition, data from satellite tagged melon-headed whales suggest that the group to which this whale likely belonged had probably already left the area, making reintroduction to the calf's social group nearly impossible. While an attempt to provide hydration and nutritional support to keep the animal alive might have been possible, it is unlikely a lone melon headed whale would be successful. A social species such as melon-headed whales often forage cooperatively. With groups numbering in the hundreds, it seems implausible that a single animal would survive if released.

As several days passed, the whale continued to mill in the same area, but by September 22, its activity level had decreased substantially and it began to linger for long periods of time at the surface, a behavior known as "logging," which is a sign of a serious health issue. On September 23, the whale's condition continued to deteriorate, and at approximately 11:00 am, the whale was sedated in the water by NOAA Fisheries staff and a NOAA contract veterinarian with vessel support from C&C Ocean Safety and Lifeguards Services personnel. The whale was then brought to shore and humanely euthanized shortly thereafter The whale's body was transported to a special facility at Marine Corps Base Hawaii, in Kaneohe, where permitted researchers with Hawaii Pacific University and the University of Hawaii's, Hawaii Institute of Marine Biology were prepared to conduct a necropsy (animal autopsy). Necropsies are conducted to examine the animal for possible cause of death and to learn additional important marine mammal health and marine ecological information. A Hawaiian cultural practitioner was engaged to oversee Hawaiian cultural protocol and advise NOAA Fisheries and partners on culturally appropriate handling of the whale's remains.

On October 3, staff from NOAA Fisheries and Hawaii Pacific University, as well as volunteers, interns, and students, gathered to prepare the whale's cremated remains for a Hawaiian cultural ceremony. Those who were with the whale on a daily basis created by hand a ho‘okupu, and Kumu Hula Mapuana de Silva presided over an ash-scattering ceremony with about 30 community members, many of whom provided flower offerings into the surf at the conclusion of the ceremony.

Of the 103 melon-headed whale stranding records in a nationally populated marine mammal stranding database maintained by NOAA Fisheries (from 1848 to the present), none of the whales were deemed healthy and releasable. These strandings occurred across several states and regions, including Alabama, Florida, Louisiana, North Carolina, New Jersey, the Caribbean, South Carolina, Texas, Virginia, and 39 were in the Pacific Islands Region (36 of those in the Main Hawaiian Islands). Only 19 of the 103 stranded individuals were brought in for attempted rehabilitation and 17 of those individuals died or were humanely euthanized, most within hours to a month of their transfer into rehabilitation. Only two individuals survived longer. One melon-headed whale in Texas survived seven months. The most successful of those rehabilitation efforts was here in Hawaii in 1996, a 2-3 month old female calf was brought to Sea Life Park for permanent care and survived for six years.

NOAA Fisheries performs its mission for the benefit of the nation, its citizens, and in particular, the island communities. We actively engage with agency partners and the community to ensure appropriate management decision-making. We extend our deep appreciation to the following partners for their support with the September 2016, melon-headed whale response in Kailua: Hawaii Department of Land and Natural Resources, Division of Conservation and Resources Enforcement; City & County of Honolulu, Ocean Safety and Lifeguard Services Division; Cascadia Research Collective; Hawaii Pacific University; University of Hawaii, Hawaii Institute of Marine Biology; Volunteers of the Hawaii Marine Mammal Alliance; Cultural practitioners; U.S. Marine Corps; U.S. Coast Guard; and Kalama Beach park community members.