Threatened Puget Sound steelhead face many challenges on their migration, including infrastructure barriers like the Hood Canal floating bridge. 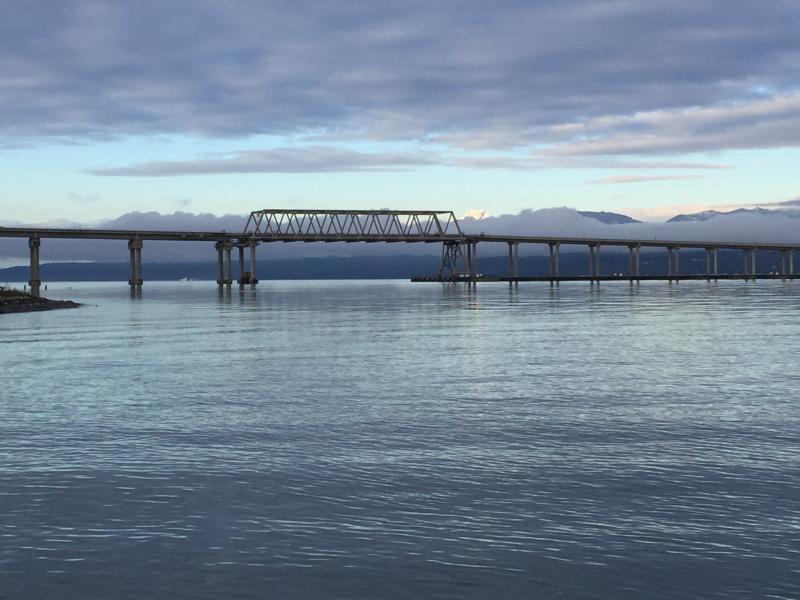 The Hood Canal Bridge is a major source of mortality for migrating steelhead smolts, according to new research in the peer-reviewed journal Ecosphere by NOAA Fisheries Northwest Fisheries Science Center scientists and the non-profit Long Live the Kings. Approximately half the smolts tracked by researchers died attempting to get past the bridge or soon after.

“We had no idea this bridge was causing such an impact on steelhead migrating out of Hood Canal,” says Megan Moore, a researcher biologist at the Northwest Fisheries Science Center and lead author of the study.

Using acoustic telemetry tags safely implanted in the fish and an array of more than 30 receivers at various points along their migration route, the researchers found the steelhead smolts slowed considerably at the bridge. The fish took one to two days on average to navigate past the bridge compared to just 5 to 7 hours to travel through open, unobstructed sections of the canal.

The Hood Canal Bridge spans the northern outlet of Hood Canal in Washington’s Puget Sound. It is called a floating bridge, but the construction actually extends 15 feet below the surface. Migrating steelhead tend to swim near the surface, so the submerged section of the bridge forms a partial barrier for steelhead migrating from Hood Canal to the Pacific Ocean.

“The fish coming down the river run essentially into this big concrete wall,” says Moore. “All the signals they use to navigate like currents and salinity are thrown off by the bridge. And so they slow down and pause, trying to figure out what to do.”

But the physical barrier of the bridge is only one part of the problem, notes Moore. The steelhead smolts can figure out how to eventually get past it. The real challenge faced by the migrating steelhead, say researchers, are the predators that congregate around the bridge.

Steelhead typically swim rapidly through Hood Canal toward the ocean. The Hood Canal Bridge acts as a speed bump, slowing their progress. But unlike a speed bump, the fish have a hard time figuring out which way to go. This pause makes them more vulnerable to predators, like harbor seals, which are now plentiful in the area.

The researchers have monitored these steelhead since 2006. They’ve seen mortality increase steadily over the years, likely due to a combination of an increased number of predators and those predators learning how and where to catch the steelhead.

Using the temperature and location data transmitted from the tag implanted in the fish, researchers can pinpoint when and where a steelhead smolt was likely eaten. A spike in temperature and a non-moving tag indicates that the fish has been eaten.

Puget Sound Steelhead are listed as threatened under the Endangered Species Act. Most populations have declined since listing in 2007. For the population to grow, more smolts need to make it from the rivers to the ocean and back again. Losing as many as half the migrating fish due to predation at the Hood Canal Bridge has a significant impact on the populations. Researchers estimate that only 1 in 10 migrating steelhead makes it to the ocean. Reducing mortality along the way, such as that at the Hood Canal Bridge, could possibly double their survival and help add individuals who could grow the population.

But solutions are hard to come by. Moore and her colleagues are looking at a range of solutions, including changing the bridge design and devices to deter predators when the steelhead are at their most vulnerable, that they look forward to testing in 2023.

Last updated by Northwest Fisheries Science Center on May 02, 2022