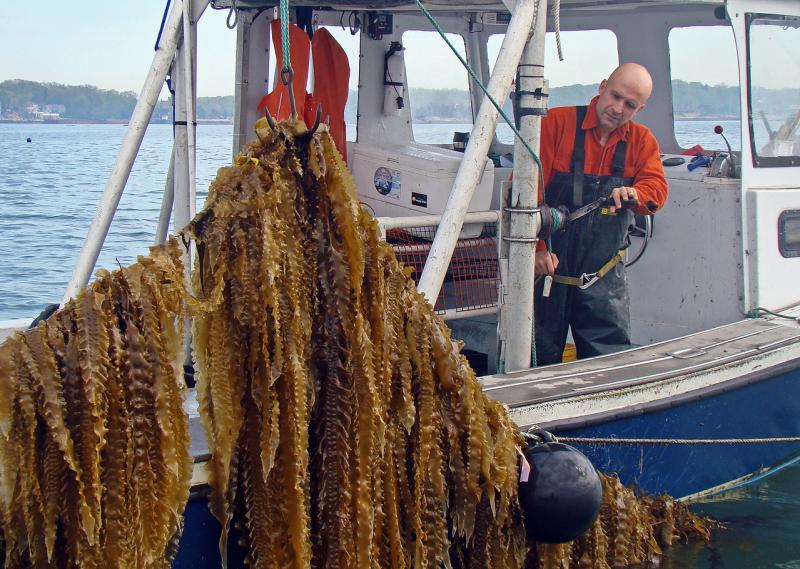 Americans generally don’t think of seaweeds as something to eat. But that view may be changing, thanks to the growing interest in sugar kelp.

Judy Li, Mark Dixon and other researchers at the Northeast Fisheries Science Center’s Milford Laboratory in Milford, Connecticut see sugar kelp as a chance to improve commercial shellfish aquaculture operations and offer a different kind of crop. The researchers are studying different aspects of the plant to help commercial growers expand their operations.

“It is a wonderful opportunity to use our skills, knowledge, and existing infrastructure to work on a new project,” said Mark Dixon, who has managed the Milford Microalgal Mass Culture Room for nearly 20 years.  “Learning new things and working with a different group of collaborators is very exciting.”

Widely cultivated and eaten in Asia, sugar kelp (Saccharina latissima) is increasingly popular in the U.S. as a nutritious food that is high in fiber, vitamins and minerals. It is used in sushi, soups, salads and many other products. Since it is a cold water or winter crop, sugar kelp can help shellfish growers diversify and also provide the public with a new seafood product.

Sugar kelp is a marine algae, also known as sea belt and Devil’s apron due to its shape. It is yellowish brown in color and looks like a giant lasagna noodle. It can grow up to 12 feet long. When dried, a white sweet-tasting powder forms on the frond. Long known as a sweetener and as a thickening and gelling agent that can be added to food and cosmetics, sugar kelp is being grown and harvested by more commercial firms in New England for a variety of uses, from food to potential biofuels.

Seaweeds like sugar kelp don’t have seeds like plants on land. The kelp releases spores into the water, which settle and germinate into tiny plants. During the past year, Dixon collaborated with a local company, GreenWave, and colleagues at the University of Connecticut to grow kelp spores in the Milford Lab’s Mass Culture Room, where light and temperature can be controlled for ideal growing conditions. The spores grew into small plants less than one-tenth of an inch in size along string wound around a piece of PVC pipe. The spools with seeded lines were then transferred to aquaria for nursery culture in ultra-filtered seawater, where they grew well and quickly.

At that point, the plants were ready to be placed in Long Island Sound to grow at GreenWave's ocean farm. The seeded line, unwound from the cylinder, was attached to a long rope, one of many growing lines on commercial underwater farms. Growing season ran from the late fall through the winter, before the water got too warm. By the end of April, the crop was ready to be harvested.

Milford Lab researchers also successfully tested the lab’s sorting flow cytometer earlier this year. The instrument will allow high-volume screening of individual kelp plants for desired traits such as high-temperature tolerance. The method may be used in the future for improving sugar kelp strains.

Li and colleagues Steven Pitchford, Paul Clark and Yuan Liu are studying different kinds of organisms that may be growing on the surface of sugar kelp at different stages during the kelp’s growth. These organisms could include bacteria, micro-and macro-algae, and various animals that occur naturally in coastal and estuarine waters. After a year working on a proof-of-concept and with a grant from the NOAA Fisheries Office of Aquaculture, she and colleagues will be sampling kelp at a local commercial farm throughout the winter and spring growing season.

“We isolated Vibrio bacteria from the upper, lower and newly grown sections of the plant to see how abundance changes throughout the growing season and in what conditions,” Li said. “Most Vibrio species are harmless, but some can cause illness as they do in shellfish under certain conditions. For sugar kelp, the good news is that Vibrio is absent during most of the growing season since this bacterial group prefers much warmer waters. We are looking at Vibrio because climate variability may be playing a role in the dynamics of these organisms. We are trying to inform growers so they can harvest in the best possible conditions.”

One of the Milford Laboratory’s sugar kelp collaborators recently received $5.7 million from the Department of Energy through the agency's program focused on advancing seaweed energy production, Macroalgae Research Inspiring Novel Energy Resources (MARINER).  The grant to Woods Hole Oceanographic Institution will fund a selective breeding program for sugar kelp and an autonomous underwater observation system to monitor large-scale seaweed farms. Grant partners include the University of Connecticut and GreenWave.

As part of that project, Pitchford and Milford Lab director Gary Wikfors will be working with the University of Connecticut to develop the kelp strains and families for breeding. Using the Lab's sorting flow-cytometer, they plan to isolate single kelp spores that will form the foundation of the selective breeding program. GreenWave will operate the open-ocean farm for field trials growing the selectively bred plants.