A Hawaiian monk seal pup was born on a busy Oʻahu beach this week. Please minimize disturbance as much as possible and observe the pair from a safe distance. 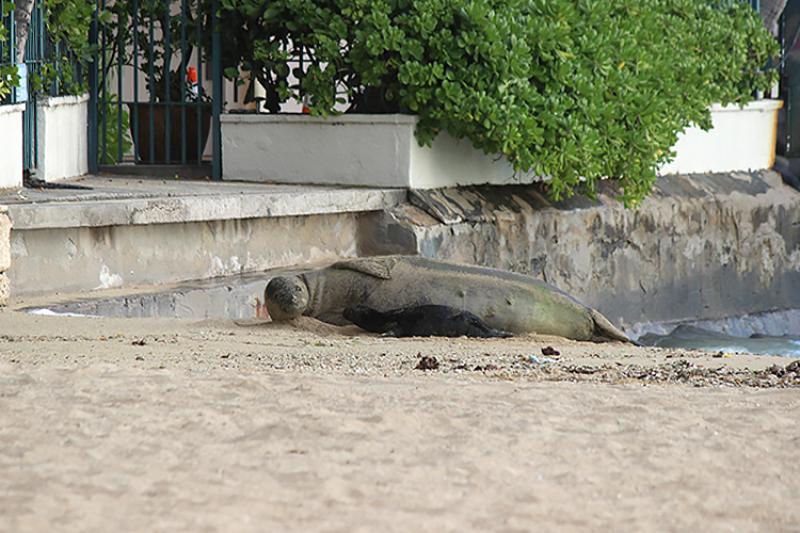 An Update on Kaiwi and New Pup

With guidance from NOAA Fisheries, Hawaii Marine Animal Response (HMAR) has taken down the temporary fencing that was erected at Kaimana Beach, Waikīkī, to provide protected space after monk seal Kaiwi gave birth to her pup. This decision was made because Kaiwi and her pup have begun ranging farther away from the pupping site and spending most of their time in other nearby locations. This is to be expected as the pup matures and becomes more mobile and curious. The two seals are still in the area, and we expect them to be there for several more weeks. However, the previous public advisory—give the seals plenty of space and stay out of the water when the seals are present (for safety reasons)—still very much applies.

On May 18, 2021, students at Hālau Kū Māna, a local Hawaiian immersion school in Honolulu, gifted the pup a name. The pup's new name, Lōliʻi, means "relaxed, at ease, without worry, or carefree." The name reflects the pup's active, curious, and adventurous nature. It also speaks to the location of the pup's birth, Kaimana Beach, which is also known as "Sans Souci," meaning "without worries" in French.

See the original story about Kaiwi and Lōliʻi below.

NOAA Fisheries is pleased to announce that a Hawaiian monk seal pup was born April 26, 2021, on Kaimana Beach in Waikīkī, Oʻahu. Both the newborn male pup and his mother, RK96 (Kaiwi), are healthy. We expect that the pair will remain in the Kaimana area for approximately 6 weeks while the new pup is still nursing. The pup will remain in the area for anywhere from a few weeks to a couple months after weaning.

The pup has not been given a name yet. On Oʻahu, Hawaii Marine Animal Response (HMAR), NOAA Fisheries' non-profit partner, works with Hawaiian immersion schools to gift seals their Hawaiian names. NOAA scientists will give the pup a 4-character alphanumeric name to keep track of him over his lifetime.

Mother seals can be very protective of their pups. For both your safety and theirs, give the seals the space they need to nurse and rest on the beach. HMAR has erected fencing and signs around the mother and pup. We ask that you keep a safe distance and observe the pair from behind the pupping zone. When they are outside the zone, please keep a distance of at least 150 ft whenever possible, particularly when they are in the water. Please follow the directions of government and HMAR personnel, lifeguards, and informational signs nearby.

As the pup matures and grows, his style of play and interaction will become much more physical. Seals play rough and can throw their weight around, which is fine when interacting with other seals. However, it can be dangerous if the interaction is with a human. If a seal views people as another seal and playmate, it may treat humans in the same rough manner. And a seal may also become aggressive towards people if it learns to associate humans with food (by people feeding it).

Encouraging interactive behavior with the pup may cause him to lose his wild tendencies, making it difficult to survive in the wild. Hawaiian monk seals are an endangered species, with only about 1,400 left in the wild. They are protected under the Marine Mammal Protection Act and the Endangered Species Act—disturbing a monk seal can result in a large fine.

Please call the NOAA Marine Wildlife Hotline at (888) 256-9840 if you witness any human-seal interactions or seal sightings.

This is not the first time that a monk seal has given birth at Kaimana Beach. The first documented pupping in this area occurred in 2017, when Rocky (RH58) gave birth to Kaimana (RJ58). Both seals are doing well, and Rocky has gone back to her old habit of pupping on Kauaʻi.