Card reader is the latest tool to help improve efficiency and timeliness of data collection and transfer. 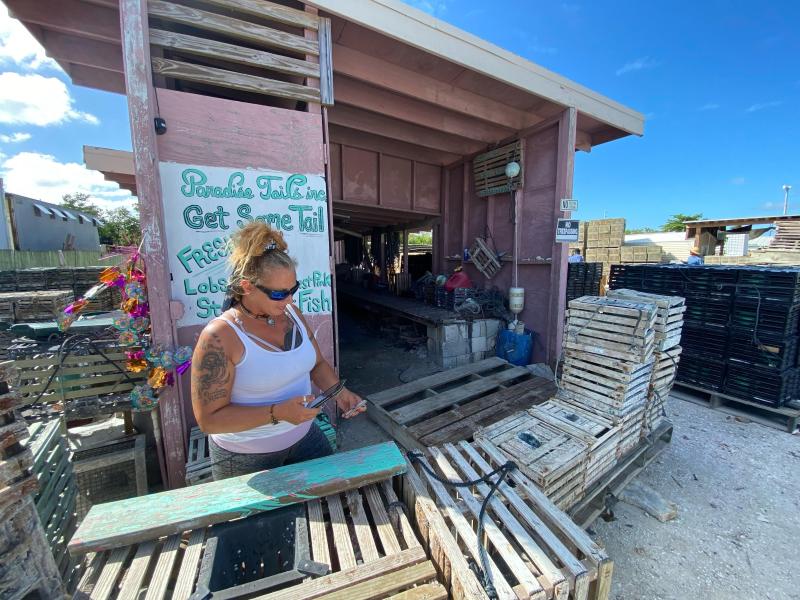 Time is money for the small crew at Paradise Tails, a family-run commercial fishing company based in Marathon, Florida. And the last thing Morgan Gotti has time for after coming in from a trip is paperwork. Gotti worked on corporate marketing and data entry prior to teaming up with third-generation commercial fisherman Scott Bruno to found Paradise Tails. She knows how onerous the process can be. That’s why she jumped at the opportunity to take advantage of the newest technology in trip ticket reporting for fisheries data.

The reporting has been mandated by the state of Florida for commercial fishers since 1984. For nearly two decades, most dealers recorded and submitted data to state and federal fisheries management agencies through paper reports. Then, in 2003, Florida introduced software to enable electronic reporting via desktop computer. Today, a new web-based application, VESL, allows Gotti and other operators to use a mobile device or tablet. They can scan a barcode that captures a fisher’s commercial license and vessel identification numbers, and it auto-generates fields to fill in additional information required for post-trip reporting. This includes data such as time and area fished, gear used, and catch and unit price.

Gotti says the reporting process used to be complicated. She would fill out paper tickets with data recorded from each trip and then mail them to the regional reporting office to be processed and transferred to a computer. The multiple steps sometimes resulted in confusing changes. Despite submitting weekly reports, Gotti says there could be months-long delays between when she sent the data and when it showed up as entered.

“With the VESL application, there’s no backlog of data; everything is there immediately so you can make sure it’s accurate, right away. And the barcode scanner makes the whole process much easier and more efficient,” she says.

Steve Brown, Associate Research Scientist with the Florida Fish and Wildlife Conservation Commission (FWC), and his staff, have worked to move the project from the pilot phase into full implementation. “With the new app, report transactions can be initiated dockside so that accuracy isn’t lost in transfer, and then data are available daily, instead of weekly or monthly,” says Brown.

He also says VESL’s enhanced speed and reliability are not only important from a fisheries management perspective, but also for other uses that can benefit fishers in times of need. “Getting good data more quickly can impact our understanding of stock assessments and landing trends. But it can also be important for special permit qualification as well as evaluating potential losses and seeing who qualifies for funds during disasters.”

Paradise Tails is one of about 200 Florida-based dealers who have signed up to use VESL since the state launched it as a pilot program in spring 2019. A state-only species version of the application was available in September.

Brown thinks the software will become increasingly popular with dealers as features such as fisher landing reports and deductions are added. The program continues to expand after ongoing impacts related to the COVID pandemic delayed rollout of the full version until January of 2021. The app is now available to fishers in Florida who deal in both federally and state-managed species. Florida FWC is distributing tablets and card readers to dealers who want to use the point-of-sale system but don’t have access to a mobile device. A state-only version of the application is also available in Texas, and barcode readers are currently being considered for the state. Louisiana and Mississippi are working with the vendor to develop versions of VESL for their states.

Pelican Seafood, also a family-owned company with more than 30 years’ experience in the industry, is another early adopter of the technology. Pelican’s Angela Robinson says that the application allows her to simultaneously report on a mix of both federally and state-managed species like grouper, snapper, pompano, cobia, and lobster. This saves her time and makes weekly administrative operations run much more smoothly. Like Gotti, Robinson says knowing immediately that the data have been submitted is very reassuring. She also likes that the application integrates with her desktop Mac, which makes it easy to review records.

Paradise Tails’ Gotti says the faster access to data serves an important function for dealers who are commercial fishers, too—the application is quickly becoming an effective business tool. “I can look back on all of our records in one place. I can see what we fished, what our catch was any month. It makes it really easy to see how our catches are fluctuating, and helps us decide where to place our traps,” she says. “In short? I love it. I’m never going to fill out a ticket again on paper. It makes it really easy for all the fishermen. So much less weight on their shoulders.”

Last updated by Office of Science and Technology on February 01, 2022