After a lifetime on the move, it's hard to imagine that Nicole Cabana would be content settling into one of NOAA Fisheries' most challenging leadership roles. She says the change is exhilarating, and right for her at this point in her life. 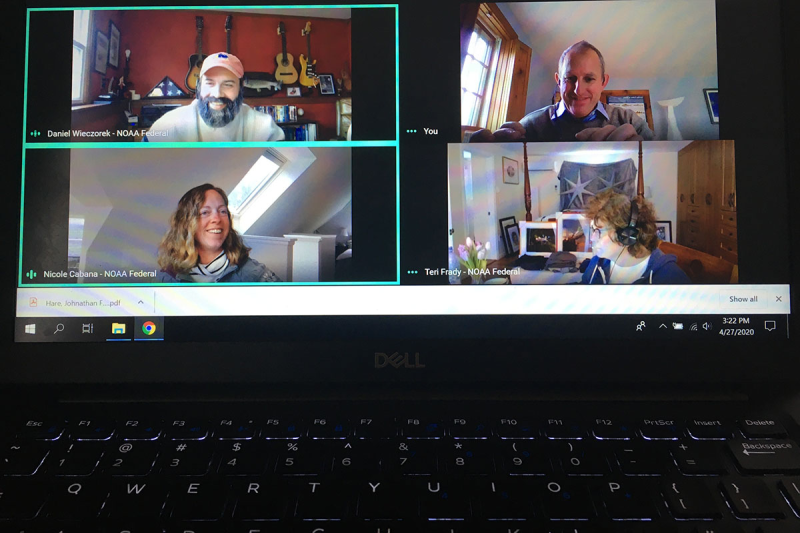 “As a NOAA Corps officer I got to do a lot of awesome things to enable science through operations,” Cabana says. “Now I can do it by addressing things that are not directly tied to executing field science, but are just as important because they support the people who do that work.”

To get a current photograph of Cabana at work in her new job, we had to go where she is most often seen these days: on a computer screen in an online meeting. She is on the lower left in the image above.

Cabana was a NOAA Corps officer for 20 years, and retired in 2020 at the rank of Commander. She has been a deck officer on NOAA research ships and a scientific diver. For the majority of her career she was an aircraft pilot. Cabana flew research aircraft on missions from the Arctic to the equator, conducting mammal research, atmospheric research, and coastal mapping.

“Nicole’s 20-year NOAA Corps career is impressive and her commitment to people and operations is what the Center needs,” said Jon Hare, the center’s science and research director. “I am really excited to have her as our deputy director.”

Cabana will be stationed at the NOAA Fisheries laboratory in Woods Hole, Massachusetts.

Cabana was born in Massachusetts and has always thought of it as home. That said, she lived in five different states before graduating from high school in Duxbury, Massachusetts.

Her father, an engineer for Bechtel, worked internationally before returning to mostly U.S. projects as the family grew. Cabana’s mother is from Wisconsin, but has family scattered across the United States. “Massachusetts was always the place that we came back to. Other than that, I didn't really have a connection to a single place, which carried on into my choice of career as a NOAA Corps officer.”

A call to work on Boston’s Big Dig brought the family back to Massachusetts where her father was born and most of his family is still located. Her parents currently live on Martha’s Vineyard.

As a student, Cabana gravitated toward math and science. When it came to choosing a career where she could apply these interests, she teetered between the ocean and space. “They are both seemingly endless and vast, and largely undiscovered, which was really what drew me to them.”

For undergraduate work, Cabana chose College of the Atlantic in Bar Harbor, Maine. “I loved that school. There was a lot of focus on field-based experiences and Maine was far enough away that I felt like I was going somewhere new.” It was here that Cabana took to the ocean rather than the stars, completing her marine biology degree in three years.

As graduation loomed, Cabana was still undecided about her next career move. Late in her last year, she was in Washington D.C. for a conference, staying with a family friend. The friend was in the Coast Guard and suggested Cabana think about the NOAA Corps.

“The next day I called up the recruiter and went in to interview for a job I knew nothing about,” Cabana recalls. “I started my officer training in the winter of 2000 at Kings Point Merchant Marine Academy on Long Island.”

The NOAA Corps commissioned its first female officer in 1972. By the time Cabana entered the service women were a growing complement within the Corps. It was still extraordinary that her first ship, the NOAA Ship McArthur, had a female commander soon after Cabana arrived for duty. A female executive officer and operations officer followed.

The ship became the first under an entirely female command. This was a fitting legacy as the same ship was the first to be commanded by a woman, future NOAA Corps commander Rear Admiral Evelyn Fields.

The next few years took Cabana from the Eastern Tropical Pacific, all along the U.S. West Coast, Hawaii, and South America. She traveled through the Panama Canal and into the Gulf of Mexico. Along the way she became a NOAA divemaster and got her master’s degree in engineering from the University of Colorado in 2009.

The McArthur’s contributions to NOAA’s Sustainable Seas Expedition provided an opportunity to work on a whale shark project with now-noted international shark expert Rachel Graham. Work included use of a DeepSee 1-person submersible. Cabana got to observe not only whale sharks but also aggregations of spawning reef fish, a teeming tower of life on these dives. Once the spawning occurred, whale sharks moved in to consume the eggs. The divers (who included photographers from National Geographic) found themselves surrounded by disbanding dog snappers.

“I did not expect to get into flight, I was expecting to go to sea, but I have flown a NOAA aircraft below 1,000 feet over basically every part of the U.S. coast, including Alaska, except for the Mexican border to Santa Barbara, and Hawaii."

During a shore-side assignment working with the Northeast Fisheries Science Center, Cabana first got the idea that aviation might be for her. “It was when I was part of the right whale aerial survey crew that I realized I might be able to be a pilot.” That survey is conducted aboard a NOAA-operated aircraft, flown by NOAA Corps officers.

It was also the beginning of a feeling that Woods Hole might be the place for her. “Even as a kid I knew about this incredible scientific community of Woods Hole, and thought maybe that would be where I would work when I grew up. I loved my time here while I was in the Corps. In the 15 years since that assignment, I always wanted to come back.”

Cabana applied for flight school in early 2005, after first starting on her private pilot license. Once she graduated, she was based in Tampa. She was on the road with the NOAA twin otter for the next 6 years, up to 250 days per year.

Cabana speaks highly of her time in the NOAA Corps, and “all the awesome things” she was able to do. She also says it was a good time to be a female in the corps. “I do not know how many female aviators there were before me—fewer than 10, maybe fewer than five. As far as I know, however, I am the only one who got married, had kids, and stayed in the job. I did not expect to be a ‘first,’ but I am.”

She also says NOAA Corps is not for everyone. “It’s hard on you in some ways—it’s a relatively small organization, and very competitive.” Expectations and requirements for long stints away from family began to shape Cabana’s focus for the next phase of her life. “NOAA Corps was a great fit for me, but I am excited to pack up the uniform after 20 years and be a civilian.”

“I really like our science director's ’s goal of making our science center the best place to work at NOAA. I am not sure I know how to measure that but I know we are moving things in the right direction.”

In her last assignment as a NOAA Corps officer, Cabana became acting deputy at the Northeast Fisheries Science Center and found herself very motivated by the job. It offered her a chance to make a difference in the world and make it a better place, while doing something she enjoyed.

“As a NOAA Corps officer I got to do a lot of awesome science. At the Science Center we are not only doing science, but applying it in ways that are so important: important to fishermen; important to the health of the ocean ecosystem; important to climate change resiliency,” says Cabana. “Now I can do my part by supporting the people who do that work.”

Examples include her interest in improving facilities and promoting diversity and inclusion. “It excites me to think we can push in the right direction to get us over a hurdle to make our science communities more accepting. While I am not a racial minority, I have often been the only woman working on a team and I know how important inclusion can be.”

Cabana lives in Falmouth, Massachusetts with her husband Jay Gallagher, and two children.