A higher definition view provides insight into the habitat that supports the Western Gulf of Alaska’s rich marine resources. 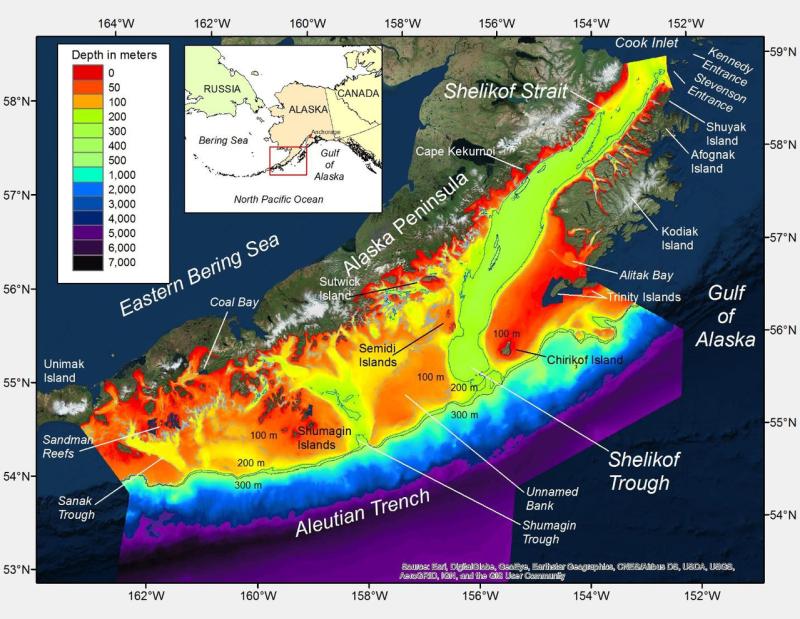 New seafloor maps show for the first time the course of ancient ice masses. They show how they shaped essential habitat for the western Gulf of Alaska’s abundant fish, seabirds, and marine mammals.

Scientists wove together historical and modern data—from century-old hand-drawn charts to modern multibeam surveys. They created a highly detailed view of the seafloor and its geological features. The results will help scientists better understand the habitat requirements of many species and the oceanographic processes that influence their success.

The western Gulf of Alaska is both ecologically and economically important. Shelikof Strait, a major feature of the region, holds special importance as spawning ground for the Gulf’s biggest stock of walleye pollock. Together with other Alaska pollock stocks, they are the target of the world’s largest fishery. Shelikof Strait is also home to rare species like the mysterious Pacific sleeper shark. Within the Gulf of Alaska bottom trawl survey area, almost half of all sleeper shark occurrences are in Shelikof Strait.

Despite its importance, until now much of the western Gulf of Alaska had not been mapped in sufficient detail to describe the geological features of this vital habitat. To create and analyze new maps, NOAA Fisheries and U.S. Geological Survey scientists teamed up to bring together geographical and geological expertise.

“You need very high quality bathymetric maps to analyze geological features, but it is really rare to have that kind of detail in Alaska. To get it, we pulled together close to 500 individual datasets. Each one was a tiny little puzzle piece. We carefully edited them into a seamless map on which we could very clearly see seafloor features—we just didn’t know what they were. That’s where Peter came in,” said Mark Zimmermann, the NOAA Fisheries Scientist who led the project with colleague Megan Prescott.

Peter Haeussler, a geologist with the U.S. Geological Survey, did know what the seafloor features were. He identified many features of glacial origin including: 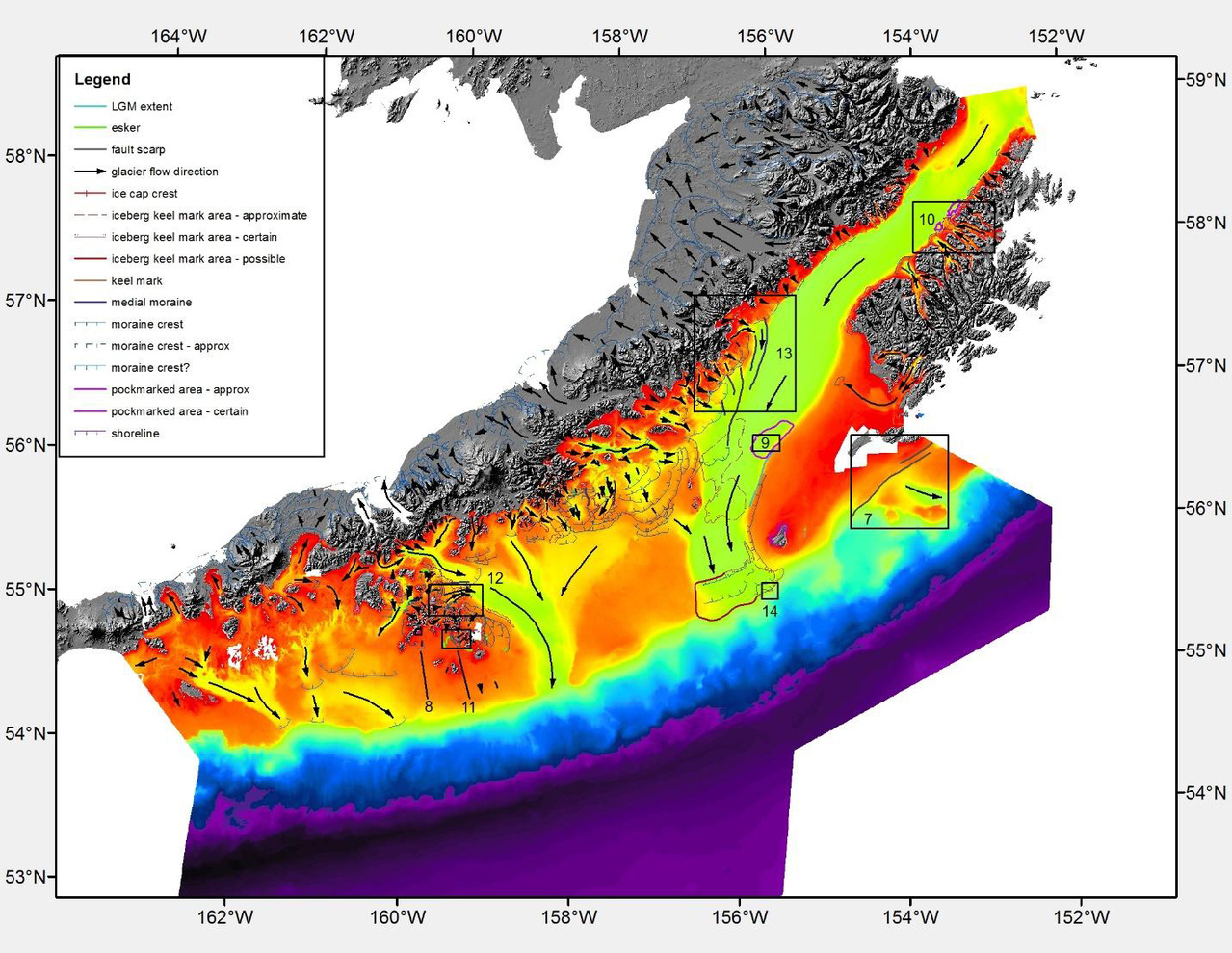 Geological features of the western Gulf of Alaska.

The new maps uncovered a rich record of glaciation, which likely dates between 13,000 to 25,000 years ago. The features reveal evidence of the flow direction, extent, and thickness of multiple glaciers. They clearly show that the glacier that filled Shelikof Trough was the most extensive of any in the region, extending for hundreds of kilometers.

“Our maps show the first comprehensive view of glaciation in the Alaska Peninsula region,” said Haeussler. “Until now, there had been little work looking at submarine landforms and how they were shaped in the Western Gulf of Alaska.”

This higher definition view of the seafloor will also allow scientists to better describe and understand habitat needs of the region’s fish, marine mammals, and seabirds. 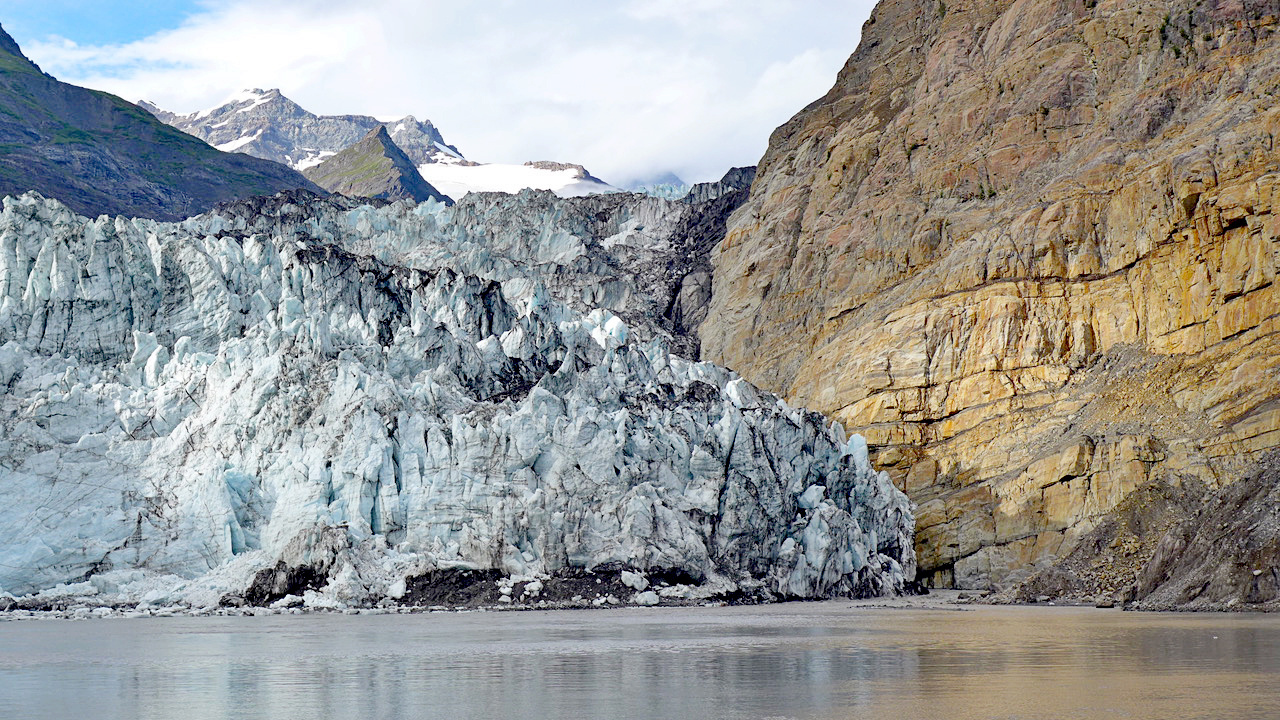 Tyndall Glacier in Taan Fiord, Alaska, is a modern-day remnant of the glaciers that once flowed over the Gulf of Alaska. Photo Credit: Peter Haeussler, USGS.

Specifically, the improved maps could help scientists to:

Several previous global and regional bathymetric mapping efforts included the western Gulf of Alaska. However, by creating new maps with much higher resolution, the team was able to correct previously published bathymetry.

“GEBCO (General Bathymetric Chart of the Oceans) has been making seafloor maps of the world for a century. But they don’t have access to a lot of the local fisheries research cruise soundings that we have here at the Alaska Fisheries Science Center. As a global organization it is difficult for GEBCO to focus on these detailed features. For example, in one western Gulf of Alaska location their map showed a big hole, 4200 meters deep. When we analyzed new data for this area, we found the hole does not exist and the area is only about 140 meters deep,” Zimmermann explains. “We were able to make these kind of corrections because we had much more detail to work with, and we are happy to contribute our data to GEBCO’s new global mapping effort.”

The team achieved this high-resolution coverage by carefully combining bathymetric data from multiple sources. They checked data against original source documents, rather than the less detailed navigational charts derived from them. 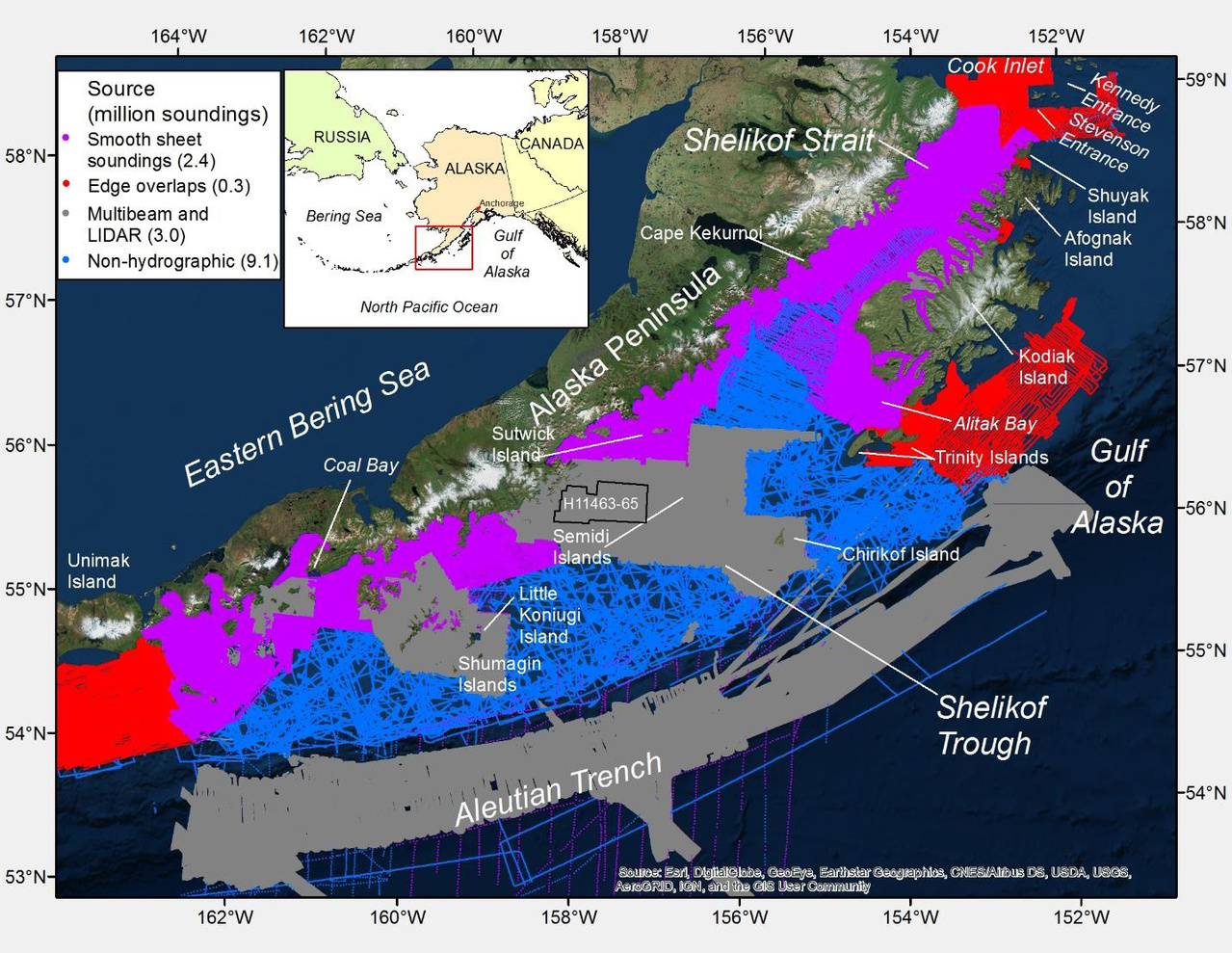 Data were pieced together from three main sources:

“The western Gulf of Alaska map was the sixth large, regional seafloor map of Alaska we have created this way, though it was the first to be geologically analyzed,” said Zimmermann. “In the future we are hoping to integrate these six maps into a single map, a single database. We’d like to do this for all of Alaska.”