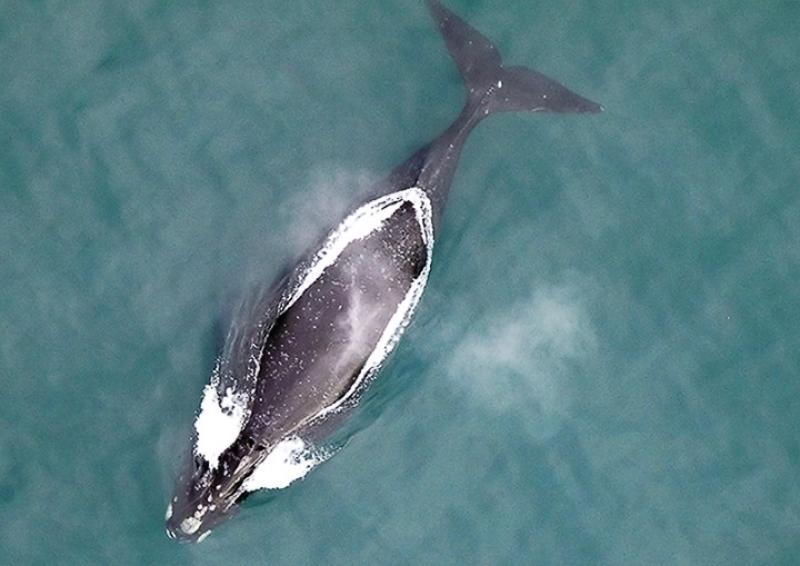 NOAA’s newest research ship, the Reuben Lasker, departs San Diego this week on its first scientific mission that includes surveying gray whales along the West Coast. The survey will also search the Gulf of Alaska for right whales, among the most rare and endangered whales on Earth.

The expedition is a collaboration between the Southwest Fisheries Science Center in La Jolla, California, and Alaska Fisheries Science Center in Seattle to take advantage of the Lasker’s advanced design and technology. The Lasker is engineered to operate more quietly than other similar ships, minimizing disturbance to the fish or marine mammals it is studying, and carries the latest navigation and acoustic technology for tracking and assessing fish and marine mammal populations. 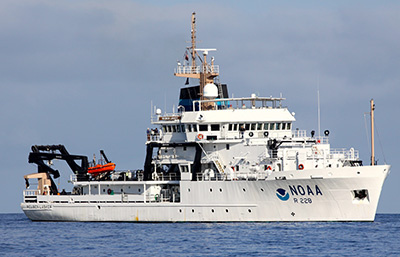 NOAA Ship Reuben Lasker is one of the most technologically advanced fisheries vessels in the world. Photo by: Robert Pitman

“This is a great opportunity for both science centers to make use of this new ship to answer some important questions about different species of whales,” said Dave Weller, a marine biologist at the Southwest Fisheries Science Center and chief scientist for the voyage. “We see this as a model for how we may work together in the future.”

Scientists have named the trip the Collaborative Large Whale Survey, or CLAWS for short. Accurate information on whale populations helps NOAA Fisheries assess their abundance and distribution as well as evaluate possible impacts from commercial fishing, shipping and other human activities.

The Lasker will depart Thursday, July 9, on schedule to reach Kodiak, Alaska, on Aug. 1. The roughly 10 scientists aboard will begin surveying for gray whales after the ship passes north of the north end of Vancouver Island. Their interest is in a group of gray whales that does not migrate all the way north to summer in the Bering and Chukchi seas most gray whales do, but instead spend their summers feeding between Kodiak and Northern California.

The population of gray whales in the eastern Pacific Ocean is estimated at about 20,000, but biologists want to know how many of those summer south of the Aleutian Islands and whether they are genetically distinct from whales that summer farther north in the Bering and Chukchi seas.

“Is this a separate unit of whales we should be concerned about? Or is there a single population within the eastern North Pacific? Those are the questions we’re trying to answer,” Weller said. “We may be surprised at how many there are, or we may be surprised to find there are not that many.” 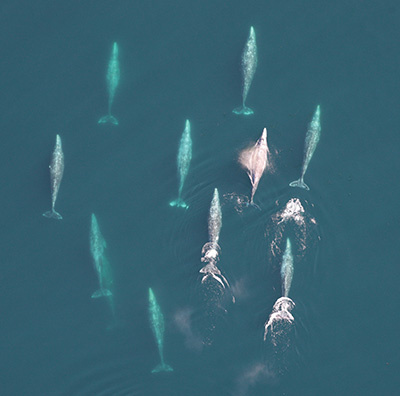 Once the ship reaches Kodiak, its focus will shift to a much more rare and imperiled species: North Pacific right whales, which once numbered perhaps about 10,000 to 20,000 in the Pacific but were hunted nearly to extinction. The Alaska Fisheries Science Center now estimates that about 30 adult right whales remain, making them likely the world’s smallest whale population.

“Any data we can collect, even a photograph, would be a great achievement,” said Brenda Rone, a research biologist at the Alaska Fisheries Science Center and leader of the second leg of the Lasker’s voyage, which will use visual observations as well as acoustic monitoring to search a swath of the Gulf of Alaska for right whales during much of August. Right whales once used the area extensively, but it’s not clear if they still do, or indeed how many survive today. The scientists aboard will also survey for blue and fin whales, which sometimes frequent the same waters.

“Even though they’re such a critically endangered population it’s difficult to get the opportunity to learn much about North Pacific right whales. They are incredibly rare and it requires a lot of effort just to locate them,” Rone said. “This is the first dedicated survey for right whales in the Gulf of Alaska. It’s really invaluable to have this kind of time aboard a large vessel in this area.”

Following the August search for right whales, the Lasker will return south from Kodiak on the third of five legs that will conclude back in San Diego Nov. 9. On the trip south the scientists aboard will again focus on gray whales to gauge the size and significance of the Pacific Coast Feeding Group.

NOAA ship Reuben Lasker is part of NOAA's fleet of specialized ships and is operated, managed and maintained by the NOAA Office of Marine and Aviation Operations, which includes commissioned officers of the NOAA Corps and civilian wage mariners. The ship is homeported in San Diego.

Construction of the Reuben Lasker was funded by the American Recovery and Reinvestment Act, and it is the fifth in a series of sophisticated fisheries survey ships built to meet the NOAA Fisheries Service's specific data collection requirements.