More than $1 million in NOAA funding will support research, development, capacity-building, and restoration for the innovative Mission: Iconic Reefs effort. 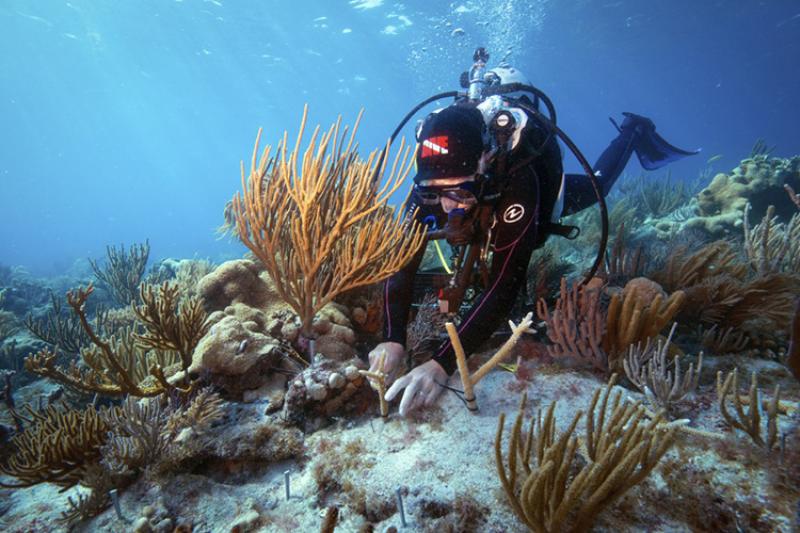 More than $1 million in recent NOAA funding is contributing to the research and development, site preparation, and capacity-building to support the long-term work of Mission: Iconic Reefs. The funding will also support in-water restoration at multiple sites. In December 2019, NOAA and partners launched an unprecedented approach to restore seven ecologically and culturally significant coral reef sites in Florida Keys National Marine Sanctuary. Since then, we’ve been working together to build the foundation for this ambitious effort.

Since the 1970s, healthy coral cover in the Florida Keys has declined by more than 90 percent. Ship groundings, pollution, overfishing, hurricanes, disease, and warming ocean temperatures all impact the reefs and compromise coral health. Losing coral reefs could result in cascading effects to the region’s economy and culture, which are firmly rooted in the local marine ecosystem.

Through Mission: Iconic Reefs, NOAA and partners are working to restore corals at seven sites in the Florida Keys. We’re using a phased approach over the next two decades. To support this effort, NOAA recently awarded more than $1 million in funding to several key partners:

Many of these investments are aimed at bridging existing gaps in research and development, helping to make future restoration work more cost-effective and efficient. Funding is also supporting the early phases of in-water restoration at several sites.

Key partners such as the Coral Restoration Foundation and Mote Marine Laboratory and Aquarium are also working toward the goals of Mission: Iconic Reefs. Much of their long-standing, NOAA-supported coral restoration efforts have shifted to focus on the target restoration sites. NOAA recently awarded $2.8 million in funding to these two partners to continue this important work through its Community-based Restoration Program.

The effort to put Florida Keys coral reefs on track for recovery is an enormous undertaking, requiring long-term collaboration among and contributions from many partners. NOAA continues to expand our network of world-renowned scientists, federal and state agencies, local restoration partners, and community stakeholders. We will ensure coral reefs continue to provide their diverse benefits for generations to come. Together, we can make a difference in reversing decades of decline in these critical ecosystems.

Last updated by Office of Habitat Conservation on September 11, 2020