A federal officer attended a tribal community event and, although his background and career choices may seem to have clashed, he was welcomed as family. Read the story to learn why. 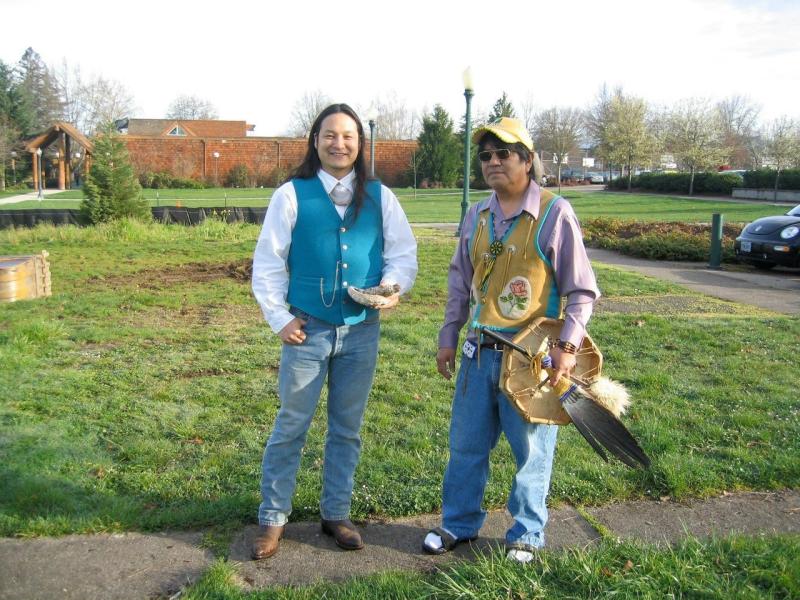 Community and industry relations has long been a priority for NOAAâs Office of Law Enforcement. Communicating with stakeholders and tribal communities builds relationships that are invaluable to good stewardship and protection of marine resources. So when NOAA Enforcement Officer Mitchel Kiyotakitsune received a special invitation to attend the Oregon State Universityâs Salmon Bake, he made sure to be available.

For 20 years, OSUâs Native American Longhouse Eena Haws has hosted this annual event as an opportunity for students to learn about treaty and fishing rights in the Pacific Northwest, work with some of the local tribes and tribal fishermen, and eat foods prepared in the tradition-rich tribal way. This was the first time NOAA Enforcement had been invited. Kiyotakitsune explained that he believes the invitation was extended to him because heâs a former faculty member of the college who taught Native American studies.

âMy attendance at this event was significant on many levels,â he said. âI am a Native community member, who happens to also be a federal law enforcement officer. I understand the nuances of Native relationships, traditions, and challenges, while at the same time understand the magnitude of the NOAA mission. So Iâm able to represent law enforcement with a familiar face and communicate in a way that everyone can understand.â

Kiyotakitsune explained that itâs unusual to see enforcement personnel at a Native community event. Historically, Native communities havenât had the best relationship with enforcement agencies, especially the federal government. He explained that when he first arrived at the event, people were concerned that he was there because they were doing something wrong or he was looking for someone. 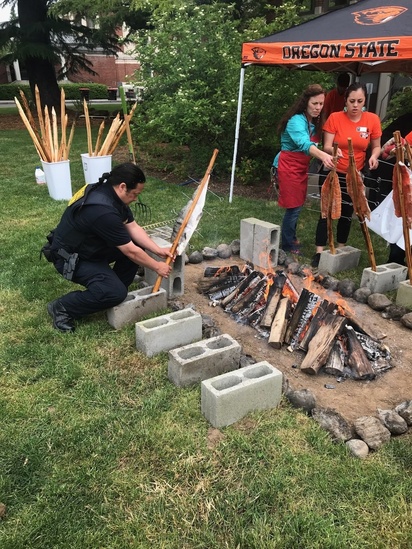 âI think it was a shock to see a person in body armor, with a gun on his hip and âFederal Officerâ on his back, show up at a Native community event,â he said. âSo there was a bit of apprehension when I told them that I was just there to volunteer.â

At first, Kiyotakitsune moved cinder blocks to set up a fire pit. Then, when the cooks began to prepare the salmon, Kiyotakitsune jumped in to help. He used traditional cooking methods he learned from local Klamath elders (âwisdom keepersâ of the tribal community), securing the salmon to cedar stakes, and assisted the tribal cook and students each step along the way.

âAttending an event like this requires a relationship with the people,â said Kiyotakitsune. âEven though people there didnât know the relationship was already established, I knew that it would be seen by the end of the dayâand it was.

âIn my culture, it is not appropriate to brag about yourself and you donât bring up stories that could seem like youâre boasting, either. So when my former doctoral student showed up and began telling stories about my background, community standing, and family, people started treating me like family.â

He said that some of the tribal fishermen in attendance knew his extended family and spoke about fishing together on the Columbia River. Kiyotakitsune said that a commonly asked question was why he joined the federal enforcement agency. He explained that NOAA Enforcement and tribal communities have common interests.

âNative people have a sacred responsibility to steward the Earth and environment. This job is one of the few places in the federal government where I can fulfill that responsibility,â he said. âItâs an honor and privilege to serve and embrace my cultural traditions.â

As the day went on, Kiyotakitsune said that more students and attendees engaged in conversation with him. They asked questions about marine resource policies and regulations, and showed interest in understanding more about what is legal and why.

âRepresenting NOAAâs enforcement office at indigenous community events is advantageous to our mission,â Kiyotakitsune said. âThe more that people understand what we do and why, the better able we are to collectively protect our marine resources. Itâs also important for people to understand that enforcement officers are part of the community. We come from all walks of life, and you can serve in uniform while also upholding your traditional values.â

Story by Ally Rogers, communications officer for NOAAâs Office of Law Enforcement. To contact her, please call 301-427-8255 or email allyson.rogers@noaa.gov.

Last updated by Office of Law Enforcement on September 20, 2018