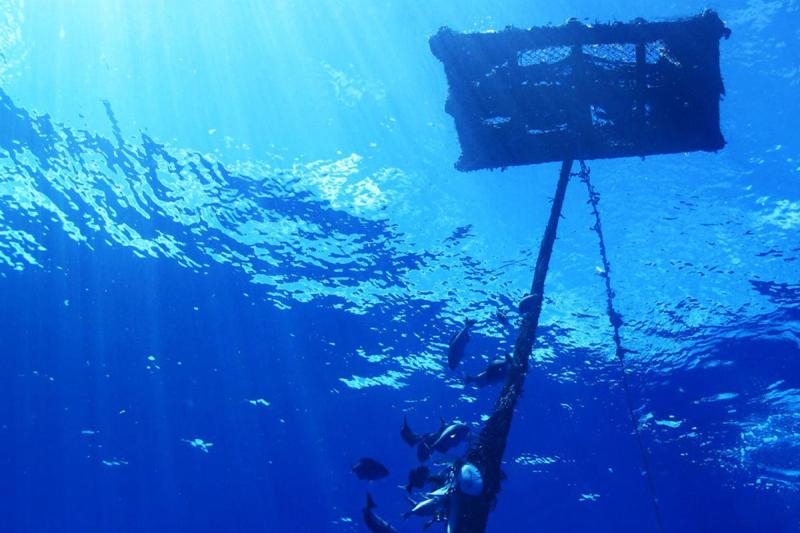 Example of a Fish Aggregating Device (FAD) in the ocean. Currently, most FADs are equipped with satellite tracking devices to allow vessels to track them at sea. About 75 percent are also equipped with sonar buoys that help measure the volume of fish congregated underneath the FAD. Photo: International Seafood Sustainability Foundation (ISFF)

NOAA Fisheries is implementing new management measures for Fish Aggregating Devices (FADs), which are floating and drifting structures that attract fish such as skipjack and bigeye tuna so fishing vessels can more easily catch them in their nets.

Vessels catching tuna in the eastern Pacific Ocean with purse seines used to set their nets around dolphins to catch yellowfin tuna that gathered below. In 1990, the U.S. Dolphin Protection Consumer Information Act made it illegal to market such tuna in the United States as “dolphin-safe”, deterring the practice. Tuna fishermen increasingly turned to FADs, usually constructed of nets and bamboo, as an alternative method to catch tuna. About 120 vessels, including about 20 U.S. vessels, currently fish with FADs in the eastern Pacific Ocean. FADs primarily attract skipjack tuna, which is now the dominant tuna species in the U.S. canned tuna market. Vessels have deployed an increasing number of FADs each year, with a few foreign vessels each releasing up to 500 FADs in 2016. Since FADs also attract bigeye tuna, the catch of that species has also increased, from about 10,000 metric tons in 1993 to 56,000 metric tons in 2016.

As the use of FADs increased, fishery scientists and managers and non-governmental organizations around the world questioned the impacts on juvenile tuna, which are essential to the health of the species. Some also questioned impacts on other species such as sharks and sea turtles.

The U.S. fishing industry raised concerns about FAD practices in other countries and the need for consistent management. Brian Hallman, Executive Director of the American Tunaboat Association stated, “The U.S. tuna fleet supports management of FADs and regards it as fundamental that any FAD management be done internationally and on a scientific basis.”

NOAA Fisheries and the U.S. Department of State worked with the Inter-American Tropical Tuna Commission (IATTC), a regional fishery management organization (RFMO) established by two treaties, to develop marking and data collection requirements for FADs. These measures required all IATTC member nations and cooperating countries to consistently mark FADs and enabled the IATTC to collect information to better understand the scope and magnitude of FAD fishing in the eastern Pacific Ocean.

In 2017, the IATTC adopted restrictions on the deployment and retrieval of FADs. NOAA Fisheries is now implementing those measures, ensuring that U.S. vessels use FADs safely and sustainably. The measures also require fishermen to report actively deployed FADs and construct FADs in ways that lower the risk of entanglement of marine life. Because all large purse seine vessels fishing for tunas in the eastern Pacific Ocean must carry a fisheries observer, the IATTC receives data on their catch as well as compliance with new IATTC measures for FADs.

FAD research by external organizations, such as the International Seafood Sustainability Foundation (ISSF), was instrumental in developing these management measures. Holly Koehler, Vice President for Policy & Outreach at ISSF elaborated, “We’ve been conducting both on and off-the-water experiments with FADs and hosting workshops with fishers and scientists for years now. Through that research and engagement, we’re pleased to say that, as of 2017, all four major tuna [regional fishery management organizations] RFMOs are on board with some degree of a non-entangling FAD management measure.”on

NOAA Fisheries will continue to participate in the IATTC’s FAD Working Group and promote science-based management of FADs in the eastern Pacific Ocean. Rachael Wadsworth of NOAA Fisheries’ West Coast Region said, “It is encouraging to see IATTC nations as well as industry and non-governmental groups work together on FAD monitoring and management in the eastern Pacific Ocean. We intend to continue to make progress on these issues as a member of the IATTC.”

Last updated by West Coast Regional Office on May 11, 2022