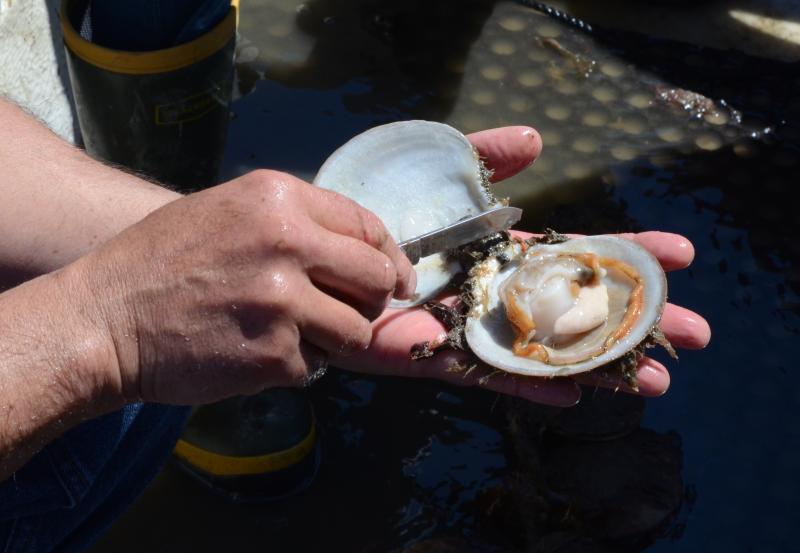 A trait fishermen and scientists share is adaptability: the trait required to think on your feet, be comfortable with uncertainty, and repurpose resources when necessary.

“Adaptable” is a word that perfectly describes Marsden Brewer, a third-generation commercial fisherman, who is also a scallop farmer and owner of PenBay Farmed Scallops. Brewer’s business is the result of his 20-year effort, as well as techniques learned through Maine's enduring friendship with its sister state, Aomori Prefecture, Japan. His three-and-a-quarter acre Stonington, Maine, farm is the first of its kind in Penobscot Bay.

The Atlantic sea scallop fishery is one of the most valuable in the United States. While wild caught scallops have shells four inches across or larger and you only eat the adductor muscle, Brewer sells a smaller, whole-animal product. He offers three sizes:

Whole scallops are a delicacy prepared by chefs at restaurants in Maine and as far away as Colorado and Arizona. Brewer is not competing with the wild scallop fishery, but bringing a new local seafood to market. He has led other fishermen to farm scallops as a way to diversify their income in a changing environment.

Finding the Right Conditions for Farming

In 2019, NOAA Milford Lab scientists conducted a habitat suitability study for cultured scallops in the Damariscotta River to assist this effort. Milford Lab Director Gary Wikfors explained, “This is an industry-driven initiative. We held two public meetings, one at the University of Maine’s Darling Marine Center and one at Coastal Enterprises, Inc.’s offices in Brunswick, Maine, and got feedback directly from the industry about how we could help.”

In June and September of the 2019 growing season, Milford scientists conducted feeding studies with sea scallops. They used a method developed for aquaculture site selection, which measures performance of the animals in their environment in real time. They also recorded water temperatures and the amount and quality of food available—critical to shellfish growth and ultimately the farms’ profitability.

They found that the scallops had higher feeding rates and efficiency in June than in September, and by September water temperatures were on the edge of being too warm for growth. That particular area is a good place for sea scallop aquaculture at some (but not all) times of the year. They now have a framework to assess other spots for scallop farming potential, and hope to recruit fishermen and farmers to take water samples.

“The expertise at the Milford Lab has helped us understand feeding dynamics to work out site selection. This expertise doesn’t occur just anywhere, and the fact that it’s available at a federal lab is notable,” said Maine Sea Grant extension agent Dana Morse.

Morse’s involvement with scallop farming goes back to the late 1990s. His first trip to Japan in 1999 was organized by the Maine Department of Marine Resources and the Maine Aquaculture Innovation Center. A group of fishermen and scientists visited Mutsu Bay in Aomori Prefecture, where scallops are cultured.

Coastal Enterprises, Inc. and Friends of Aomori led the most recent technology transfer trip in 2016, which included shellfish growers and fishermen. They visited fishing cooperatives, traveled out to scallop farms to see the ear-hanging method and lantern nets in use, and learned about scallop processing. Enthusiasm for adapting Japanese farming methods and technology to the Atlantic sea scallop is growing. Coastal Enterprises, Inc. and Maine Sea Grant have since purchased Japanese farming technology and made it available for growers’ use. This includes high-pressure scallop washers, a lantern net washer, and an automated drill that punches a hole in the scallop shell’s hinge. This is used for the ear-hanging technique, where scallops are strung on a submerged line.

Aomori Prefecture and Maine are sister-states. Their relationship goes back to 1889, when the Cheseborough, a ship built in Bath, Maine, ran aground off the coast of Aomori. Fishermen and villagers there launched a daring rescue that saved some of the crew. When a delegation from Aomori traveled to Maine a few years ago, Brewer hosted them at his home for lobster and scallops. He was impressed with how well fishermen and growers who spoke different languages were able to communicate when it came to their favorite topics: fishing gear and seafood.

Though PenBay Scallops offers many inviting, whole-scallop recipes from around the world, Brewer’s favorite way to cook them is simple. He likes broiling them in the oven for a few minutes on each side, until the meat separates from the shell, then shelling them and eating them with a salad. “They’re super good to eat!” Brewer said, “and they fit the bill on everything—sustainability, restorative nature, you can’t do any better for the environment.”

Though the Gulf of Maine is changing rapidly, flexibility between fishing and farming, facilitated by science and innovation, can keep Maine’s seafood industry going strong.