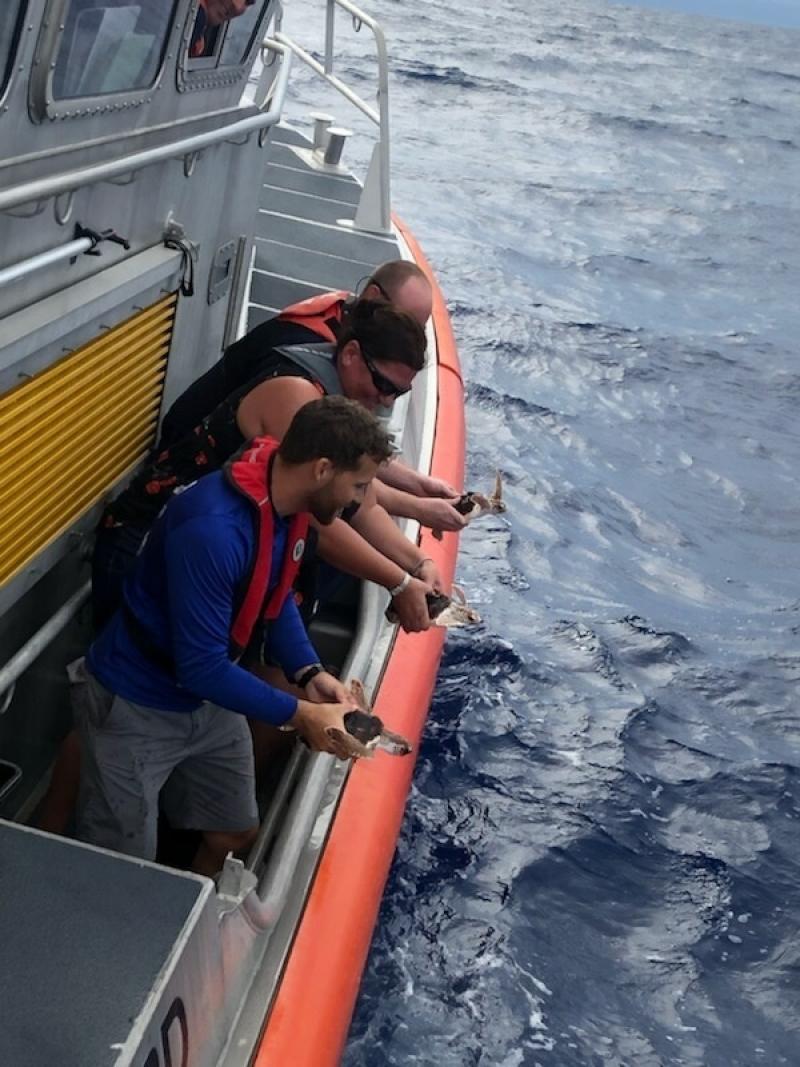 Earlier this week, NOAA Fisheries’ scientists and the Florida Fish and Wildlife Conservation Commission (FWC) released 118 loggerhead sea turtles into the Atlantic Ocean off the Florida coast.  In this unique program designed to test the success of devices used during commercial fishing operations, scientists release turtles raised in captivity.

“The turtles are part of a two-week study conducted in mid-June by NOAA scientists to evaluate the effectiveness of turtle excluder devices (TEDs) in shrimp trawls,” said, NOAA biologist Ben Higgins.  “This work is so important to the survival of endangered sea turtles.”

TEDs were designed to be attached to shrimp trawls. They enable sea turtles to escape from fishing nets, while minimizing shrimp loss.

“A key to the reliability of this research is that it entails the use of live, captive-raised loggerhead sea turtles,” said biologist Higgins.

During the TED testing, which occurs just southeast of Panama City Beach, Fl., divers observe and videotape sea turtles' behavior to document how well they are able to escape from TED‑equipped shrimp trawls.

Biologists raise loggerhead sea turtles, hatched in Florida and, at the appropriate age and size, they are returned to Florida for this research, where each turtle undergoes brief TED testing for about 10 minutes.

Once the research is complete, biologists release all of the turtles unharmed into the wild.  “From what we can tell, our evidence indicates that the turtles we release become fully assimilated into the wild stocks,” Higgins added.  “They do not appear to suffer any adverse effects from being raised in captivity or used in the research.”

Biologists release the turtles into the Atlantic Ocean where wild turtles of the same size and maturity are found.  Once released, the turtles begin seeking sources of food, and may venture into passes and bays where crabs and other shellfish, the staple of their diet, are commonly found.

This year, the United States Coast Guard from Station Lake Worth Inlet provided vessel support for the release of 118 turtles offshore from Riviera Beach.

The public is reminded that it is a violation of the Endangered Species Act to take sea turtles.  Even small sea turtles will bite people and can inflict painful wounds if handled or provoked.  Although it is common for people to encounter sea turtles in areas that are popular recreational destinations such as beaches, docks and piers, people should not touch them.

Turtles that exit the water or appear to be experiencing difficulty swimming may have been injured.  People who see sea turtles that appear to be in distress, injured, or dead should not touch or remove anything from these turtles and should contact FWC’s Division of Law Enforcement immediately at 1‑888‑404‑FWCC (3922).  They will ensure the turtles are examined and treated by qualified wildlife professionals.