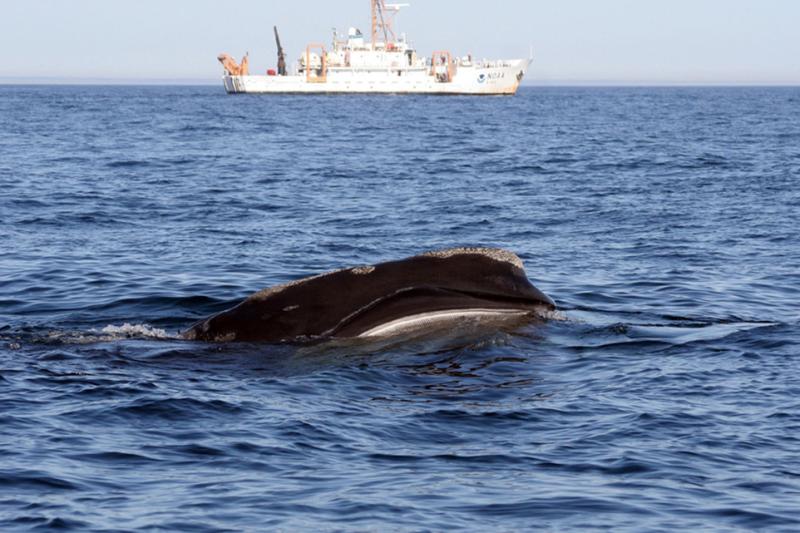 Today, there are only about 400 North Atlantic right whales left and it is estimated that only 85 are reproductively active females. The survival and reproductive success of these remaining females and their offspring is critical to right whale recovery.

Female North Atlantic right whales are not living as long as they once did and more females than males have been reported dead in recent years. Today, females make up approximately 40 percent of the population. It is thought that the energetic stress of reproduction makes female right whales more susceptible than males to dying from entanglement or ship strike injuries.

Biologists also believe that injuries and stress caused by long-term entanglements is one of the reasons that females are calving less often. Studies suggest that more than 85 percent of North Atlantic right whales have been entangled in fishing gear at least once. About 60 percent have been entangled multiple times.

Reducing Entanglements and the Future of Ropeless Gear

“Currently, gear modifications and seasonal fishery closures help protect North Atlantic right whales,” said biologist Jessica Powell, an expert in marine mammal/fishery interactions at NOAA Fisheries’ Southeast Regional Office. “We have a number of different measures and fishery regulations to help reduce entanglement. For example, fishermen in the Southeastern United States who are fishing the ocean during calving season use lines with low breaking strength, so an entangled animal could hopefully break free. In the future, we’d love to see ropeless gear.”

Entanglement in fishing ropes attached to gillnets and traps on the ocean floor is one of the greatest threats to North Atlantic right whales. Becoming entangled in fishing gear can severely stress and injure a right whale. Being entangled slows down the whale, decreases its overall fitness, and can lead to a long and painful death. 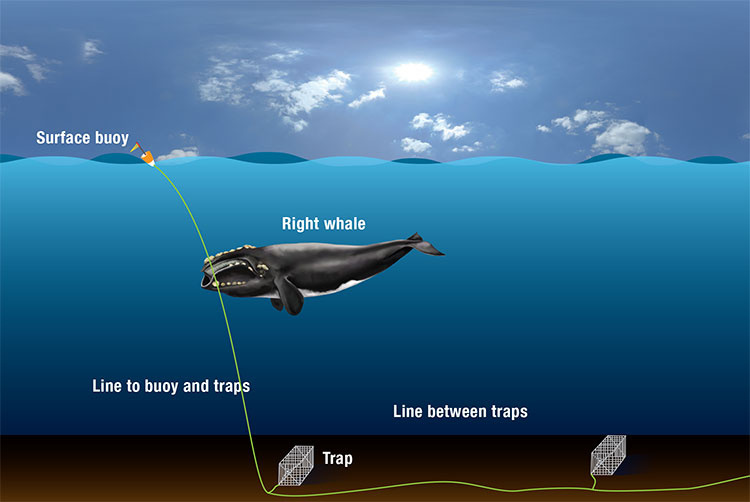 Ropeless fishing gear is an emerging option that could alleviate a lot of this risk. There are different kinds of ropeless gear, Powell explained, but all are designed to reduce right whale interactions. “Some methods work with lift bags that float the gear to the surface; some have remote sensors that can deploy a buoy when the trap/pot receives an acoustic signal. There are a variety of ways they can work, and it’s under development. That’s part of the research and development phase—figuring out what works best for fishermen without leaving ghost gear behind.”

Ecologist Caroline Good, who works on the Large Whale Team for NOAA Fisheries, agreed. “The ability to use gear retrieval devices that do not require the use of stationary buoy lines in the water column would be a truly game changing development for right whales,” she said.

Entangled whales can tow fishing gear for hundreds of miles. Some fisheries with a history of entanglements are required to mark their gear. Identifying when, where, and in what fishery a whale was entangled is only possible when gear is marked or configured for a particular area and fishery.

Every year, North Atlantic right whales travel between calving grounds off the coast of Florida and Georgia to feeding grounds near New England and Canada. Along the way, they travel through many different fisheries and busy shipping lanes. 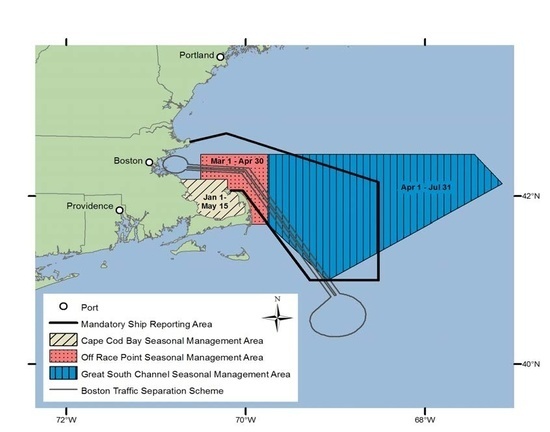 A map of the seasonal management areas off Massachusetts.

Within seasonal management areas (SMAs), most vessels above 65 feet in length must transit at 10 knots or less during the active period. Some military and law enforcement vessels are exempt. The SMAs are inactive at certain times of the year. For the most part the mid-Atlantic and Southeast SMAs active from November to January and New England SMAs active January to July. The SMA periods and locations are based on what we know of right whale distribution, as well as high vessel traffic areas.

But North Atlantic right whales don’t always go where we expect. We need to adapt to their changing distribution to protect them. Caroline Good explained that since the ship strike reduction rule went into effect in 2008, we have seen changes in right whale habitat use and distribution.

“The whales are now using the waters south of Nantucket and Martha’s Vineyard as a foraging habitat,” Good said. “That area was not heavily used prior to the 2008 rule. We’re investigating that now to see if there needs to be additional protections as we also, undertake a broad evaluation of the speed rule and evaluate if action is needed to offer more protections against vessel strikes.” 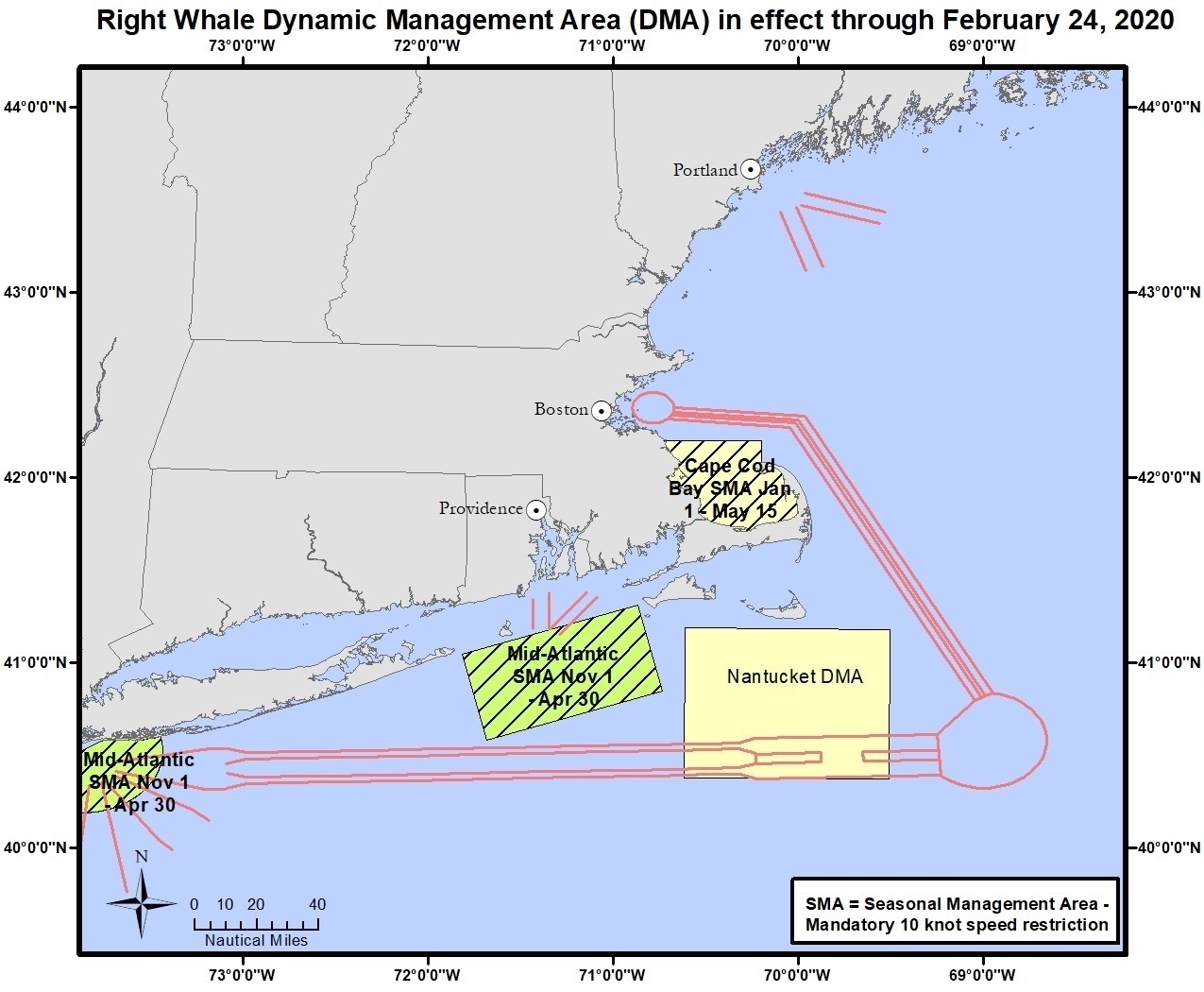 A map showing an active DMA near Nantucket, Massachusetts.

The Dynamic Management Area (DMA) program was created to supplement the speed rule. If three or more right whales are sighted in close proximity to each other outside an SMA, a DMA is declared in that area for 15 days. DMAs are voluntary speed restriction areas. DMA announcements are distributed via email announcements, Coast Guard broadcasts, and online.

“U.S. and Canadian researchers have been working together for years,” Good said. “NOAA will hold a right whale workshop or coordination call and include participants from Canada’s Department of Fisheries and Oceans. Canada is always invited to the table and vice versa. NOAA’s Northeast Fisheries Science Center aerial survey team has been conducting extensive aerial surveys in the Gulf of St. Lawrence to assist with getting photos of whales and supplementing efforts of the Canadian survey teams.”

At different times, the U.S. and Canada have pioneered methods to protect North Atlantic right whales that later were adopted by the other country. “Canada was first to modify a shipping lane in the Bay of Fundy to avoid a preferred North Atlantic right whale foraging spot,” Good said. “We later modified the shipping lane going through Stellwagen Bank National Marine Sanctuary to Boston. Because Canada did it first, the precedent made it easier for us to do it.”

“Later on, the United States implemented the first mandatory  speed rule for right whales and in 2017 Canada followed with mandatory speed restrictions in the Gulf of St. Lawrence ” Good explained. “In this instance, the existing U.S. rule made it easier for Canada to introduce the idea to their maritime community and present the benefits. Each country can help the other by implementing new strategies and observing what works.”

If you see injured, entangled, stranded, or dead whale or marine animal, immediately report it to your local stranding network. These networks are located around the country in all coastal states.

North Atlantic right whales are one of nine “Species in the Spotlight.” These are species in need of immediate help due to their endangered status and declining populations. 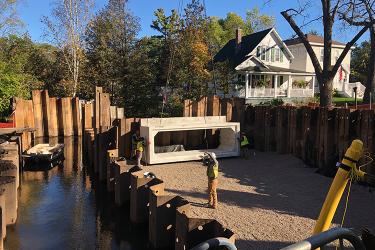 Last updated by Office of Protected Resources on February 20, 2020