All over the world, the demand for delicious, safe, and healthy fish is increasing, to the point that fish farming, or aquaculture, is now the fastest-growing food-producing sector in the world. Consequently, the demand for feed ingredients, especially fish meal and fish oil, has increased dramatically in recent years. If growth in this industry is to be sustained, we need to find viable replacements for fish meal and fish oil in aquaculture feeds. 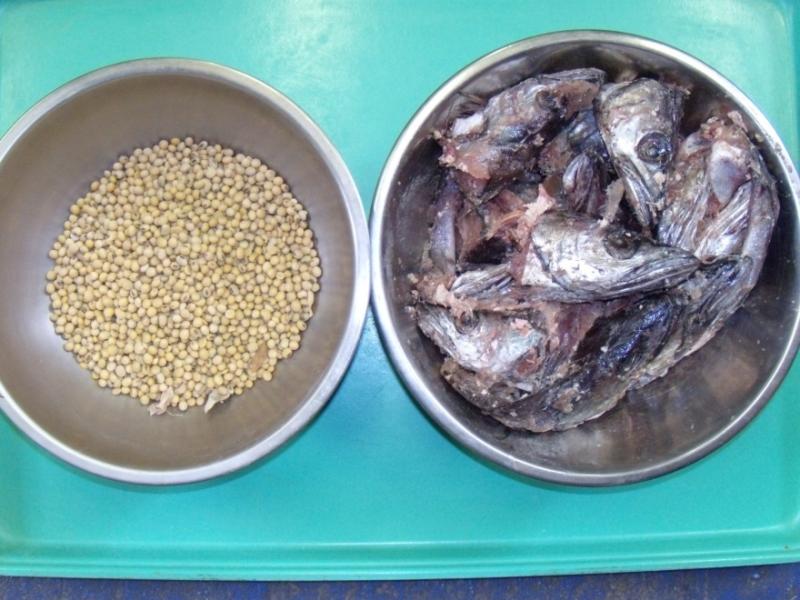 All over the world, the demand for delicious, safe, and healthy fish is increasing, to the point that fish farming, or aquaculture, is now the fastest-growing food-producing sector in the world.

This has put a lot of pressure on fisheries to produce more fish for human consumption, but industrial fisheries throughout the world are currently managed at or near their maximum yield. The demand for feed ingredients, especially fish meal and fish oil, has increased dramatically in recent years. If growth in this industry is to be sustained, we need to find viable replacements for fish meal and fish oil in aquaculture feeds.

Scientists in the Aquaculture Program at the Northwest Fisheries Science Center (NWFSC) are currently searching for promising alternative feed ingredients. Terrestrial plants such as soybeans can replace much of the fish meal, though in some cases, nutrient deficiencies and poor flavor have been noted as a result.

In contrast, products derived from fish-processing waste have a tremendous potential to directly replace fish meal and fish oil in aquaculture feeds. Several new industrial processes, including the Montlake Meal Process, have been developed by NWFSC scientists to process fishery waste into highly functional protein meals, and are likely to be adopted by the aquaculture industry in the near future.

Taurine, an amino sulfonic acid, is important to the health of all vertebrates, including fish. It has a role in maintaining a proper balance of fluids and electrolytes, and also regulates lipid absorption, stabilizes membranes, and helps maintain calcium homeostasis.

While taurine is found in all animal proteins, it is not found in the plant proteins commonly used in alternative fish feeds. Though many animals biosynthesize taurine, cats and some marine finfish have only a limited ability to produce it. In cats, a diet without taurine will cause blindness and multiple birth defects. Taurine is allowed in cat, dog, and chicken feeds in the United States, and is generally recognized as safe for humans—indeed, it is a key ingredient in many energy drinks.

When alternative plant-based fish feeds are supplemented with taurine, they help ensure optimal growth, nutrient retention, and overall health of many farmed marine fish species. However, until recently, taurine was prohibited in fish feeds in the United States.

Through a series of experiments at NWFSC, Aquaculture Program scientists have demonstrated that taurine is a beneficial and safe supplement to alternative plant-based feeds for sablefish (a model cold-water marine fish). These studies also showed that consumption of sablefish that had received taurine-supplemented feeds would result in a low-to-moderate exposure to taurine, with minimal human health risks. In fact, you would need to consume an entire pound of cultured sablefish muscle to exceed the amount of taurine in a 12-oz can of Red Bull.

In early 2016, Aquaculture Program manager Ron Johnson joined scientists from Auburn University and the USFWS to petition the FDA to allow taurine in fish feeds. The petition was reviewed by scientists at the American Association of Feed Control Officials (AAFCO). After review, AAFCO accepted the petition’s recommendations, and a new ingredient definition was adopted for taurine at the AAFCO 2017 mid-year meeting.

From the AAFCO ruling, taurine is now approved for use in fish feeds in the United States. In addition, U.S. feed manufacturers are now allowed to sell taurine-supplemented feeds internationally. We hope this approval will facilitate the use of domestic crops in alternative fish feeds and further increase the environmental sustainability and economic potential of the aquaculture industry.

As a follow-up to the above research, NWFSC scientists are now evaluating the potential of incorporating intensively reared macroalgae in fish feeds. A red macroalgae called Turkish Towel, with a good nutritional profile and naturally high levels of taurine, is showing promising results. Ideally it will yield similar benefits to supplementing feeds with synthetic taurine, and likely further improve fish health. Frank Sommers and Lisa Armbruster are additionally investigating the effects of supplemental taurine on the olfactory system and muscle physiology of sablefish fed alternative plant-based feeds.