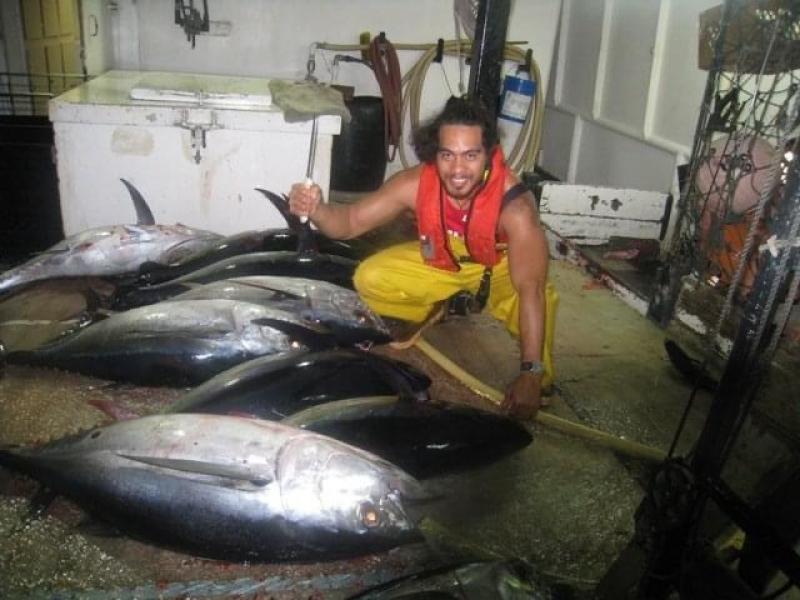 Growing up in Samoa, Mario Esera would spend weekends fishing on reefs with his father. With minimal supplies—not much beyond a cooler of water and ice—they would pass the days catching their fill of fish. During these trips, Esera learned to identify a range of marine species. That’s a skill he relies upon today as a fisheries observer for longline vessels based in American Samoa and Hawaii.

After high school, Esera worked at the National Park of American Samoa—the only U.S. national park south of the equator. He was part of a National Park Service team that would travel seasonally to fight California wildfires.

“I was about to go join the Army the next day, when my friend, a fisheries port coordinator, told me about an observer course,” says Esera.

At the time, the Native Fisheries Observer program in Hawaiʻi provided three weeks of observer training to Native Hawaiians and Pacific Islanders through the non-profit organization Alu Like in Honolulu. Passing the course qualified participants to then move on to the standard 3-week certification program for all observers (which usually requires a college degree as a prerequisite).

“I decided I would take the course, and if I didn’t like observing, I could still join the Army,” says Esera.

He’s now spent more 12 years and more than 2,000 days at sea—even surviving a few hurricanes onboard vessels. It seems safe to say that observing was the right choice for Esera, with no plans to stop any time soon.

Esera works in the Pacific Islands Regional Observer Program. He observes trips on longline fishing vessels targeting pelagic species out of both Honolulu and Pago Pago, American Samoa. Esera typically has 72 hours notice before leaving on a trip, though sometimes he is requested to make a quicker turnaround between one trip returning and another leaving. The trips from Hawaiʻi focusing on bigeye tuna and swordfish average 22 days (tuna) to 27 days (swordfish) in length. Trips out of American Samoa, targeting albacore, can take anywhere from a month to 90 days.

After traveling to the fishing grounds,  Esera is responsible for recording data on what’s caught and what’s thrown back. The data can range from a few pages total for a trip (with 30 data entries per page), to six or seven pages nightly, depending on the volume of catch. For the longer trips out of American Samoa especially, “that’s a lot of data entry,” Esera says. But he prefers the fast-paced days of catching fish to the ones spent traveling to the fishing grounds.

In addition to logging targeted catch and discards, Esera assists in marine research. He reports whale sightings, including minke whales and false killer whales. He also supported a shark post-release survival study through tagging incidental sharks at sea, and has seen how his efforts connect to conservation.

“The shark tagging program manager sent a satellite map of an oceanic whitetip [a shark Esera tagged] that went down to Tonga and came back up to Hawaiʻi, which was cool to see,” he says.

On top of that, he still gets excited when he encounters fish he’s never seen before or other rare species. He recounts spotting hawksbill sea turtles, devil rays, and flying gurnards as highlights. He also notes the beauty of witnessing “lots of sunsets and sunrises by the horizon on the ocean.”

With 12 boats in the American Samoa fleet, Esera has gotten to know the captains and crew of each vessel. Captains and crews hail from all around the world, and Esera has grown to appreciate the different cuisines and styles of the various crews. He emphasizes the importance of communication— even just the essentials of “sign language and broken English”—and finding ways to connect. This is especially important when sharing weeks or months at sea on an 80-foot vessel with a captain and six crew members. Ultimately, the reality is that “when you need help, they are the ones you may depend on,” he adds.

“In the beginning it could be a lonely life,” Esera admits. While he’s at sea, his wife raises their seven children, ranging in age from seven to 17. Outside of brief calls via satellite communications devices, his contact with family is limited, but they understand his sacrifices.

“I love my job because it helps support not only my family, but also my extended family,” Esera says, adding that his work as an observer has also helped keep his family in Samoa. “I want them to grow up with family in Samoa knowing and appreciating the culture and Samoan way of living.”

In addition to photos and videos of his kids he brings with him on the boat, Esera relies on music, especially classic reggae, to help pass the time and connect with the crew. On some vessels, he’ll share his love of karaoke, which “keeps us awake and not thinking about home.”

From his non-committal start to observing, Esera has transitioned to being one of the most experienced observers in the region. He is now seen as a mentor by new observers. They often reach out to him with species identification questions or to let him know they spotted a pelagic puffer or fan fish.

“I’ve definitely improved my identification skills, especially of pelagic species,” Esera says, reminiscing of  his days fishing on the reef with his father.

With his combination of identification expertise and his ability to work well with crews from a variety of backgrounds, it’s not hard to see why Esera is a trusted resource to his colleagues. Despite the long trips and challenges that come with being at sea, Esera intends on staying a professional observer for many years to come.

“I’m aiming for 5,000 sea days to beat the sea days record for Hawaiʻi and American Samoa,” he says. “I’m second on the list so I’ll retire when I’m on top.”

Last updated by Office of Science and Technology on May 23, 2022