Ocean acidification expected to accompany climate change may slow development and reduce survival of the larval stages of Dungeness crab, a key component of the Northwest marine ecosystem and the largest fishery by revenue on the West Coast, a new study has found. 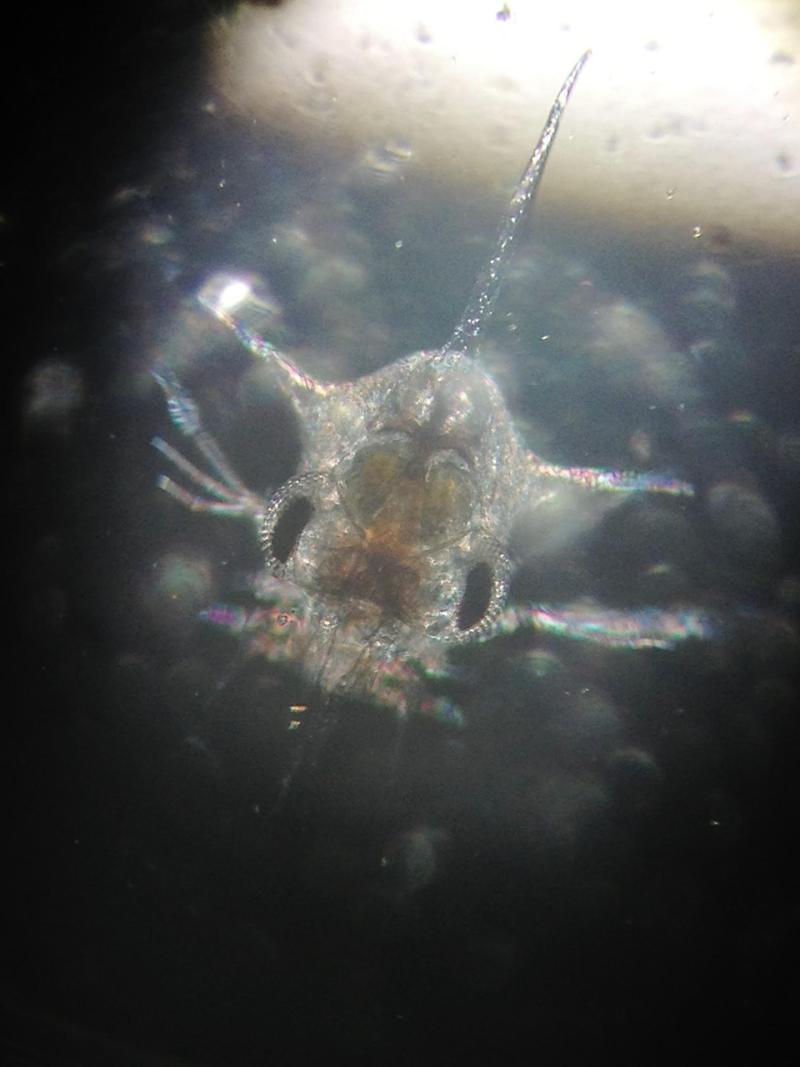 Ocean acidification expected to accompany climate change may slow development and reduce survival of the larval stages of Dungeness crab, a key component of the Northwest marine ecosystem and the largest fishery by revenue on the West Coast, a new study has found.

The research by NOAA Fisheries’ Northwest Fisheries Science Center in Seattle indicates that the declining pH anticipated in Puget Sound could jeopardize populations of Dungeness crab and put the fishery at risk. The study was recently published in the journal Marine Biology.

Ocean acidification occurs as the ocean absorbs carbon dioxide from the combustion of fossil fuels. Average ocean surface pH is expected to drop to about 7.8 off the West Coast by 2050, and could drop further during coastal upwelling periods.

“I have great faith in the resiliency of nature, but I am concerned,” said Jason Miller, lead author of the research, which was part of his dissertation. “Crab larvae in our research were three times more likely to die when exposed to a pH that can already be found in Puget Sound, our own back yard, today.”

Scientists collected eggs from Dungeness crabs in Puget Sound and placed them in tanks at the NWFSC’s Montlake Research Laboratory. The tanks held seawater with a range of pH levels reflecting current conditions as well as the lower pH occasionally encountered in Puget Sound when deep water wells up near the surface. Larvae also went into tanks with the even lower-pH conditions expected with ocean acidification. 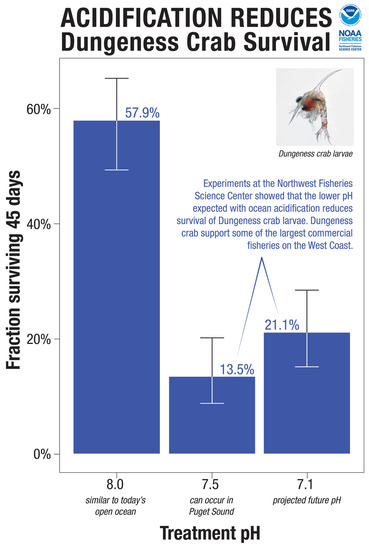 Experimental results of study that showed survival of Dungeness crab larvae to the lower pH expected with ocean acidification.

“The question was whether the lower pH we can expect to see in Puget Sound interferes with development of the next generation of Dungeness crab,” said Paul McElhany, a NOAA Fisheries research scientist and senior author of the paper. “Clearly the answer is yes. Now the question is, how does that play out in terms of affecting their life cycle and populations overall?”

Larvae hatched at the same rate regardless of pH, but those at lower pH took longer to hatch and progressed through their larval stages more slowly. Scientists suggested that the lower pH may reduce the metabolic rate of embryos. That could extend their vulnerable larval period, or could jeopardize the timing of their development in relation to key food sources, researchers suggested.

Larval survival also dropped by more than half at lower pH. At pH 8.0, roughly equivalent to seawater today, 58 percent of the crab larvae – called zoeae – survived for 45 days. At pH 7.5, which sometimes occurs in Puget Sound now, survival was 14 percent. At pH 7.1, which is expected to roughly approximate the pH of water upwelling on the West Coast with ocean acidification, zoeae survival remained low at 21 percent.

“Areas of greatest vulnerability will likely be where deep waters, naturally low in pH, meet acidified surface waters,” such as areas of coastal upwelling along the West Coast and in estuary environments such Hood Canal, the new study predicts.