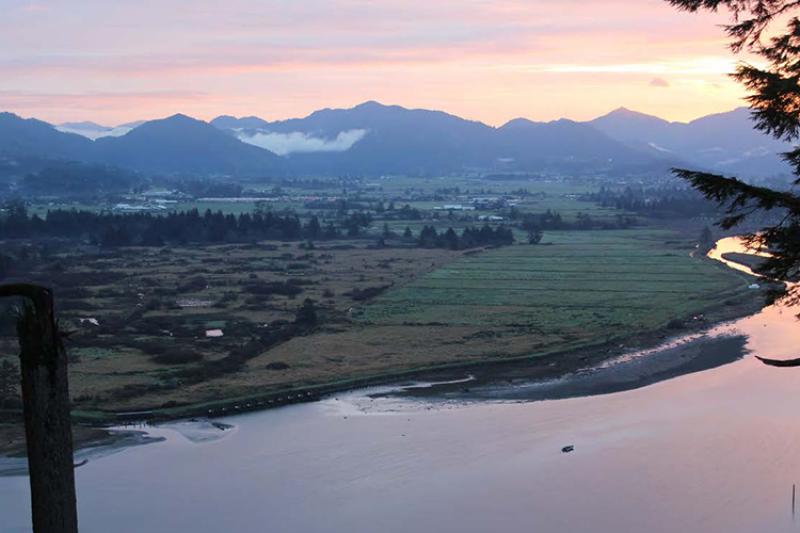 A new report highlights the socioeconomic benefits of a NOAA-supported effort to restore habitat for threatened salmon and reduce community flooding in Tillamook, Oregon. According to the report, the landscape-scale Southern Flow Corridor project has supported $14.6 million in economic output, increased the value of nearby homes, improved local water quality, and more. The report was produced by researchers at Oregon State University.

Through the Southern Flow Corridor project, NOAA and partners restored tidal wetlands to provide habitat for salmon and reduce flooding in the town of Tillamook. The project created 443 acres of wetlands and opened 13 miles of tidal channels to migratory fish such as chum, Chinook, and threatened Oregon Coast coho salmon. It also reduced flooding to 4,800 acres of the surrounding community.

The researchers found that, in addition to creating habitat and reducing flooding, the project provided a multitude of other benefits. These include:

By helping to increase the abundance of salmon in Tillamook Bay, the project is also expected to produce significant recreational fishing benefits. The publicly accessible project site also provides opportunities for activities such as hiking, kayaking, wildlife viewing, and a dog park.

The report was funded by the Office of Habitat Conservation, with technical support from its Restoration Center. NOAA’s partners on the Southern Flow Corridor project included FEMA, Tillamook County, Tillamook Estuary Partnership, local landowners, and many others.

Last updated by Office of Habitat Conservation on January 05, 2022