California sea lions documented as repeatedly preying on threatened salmon and steelhead near Willamette Falls on the Willamette River can be removed and euthanized. 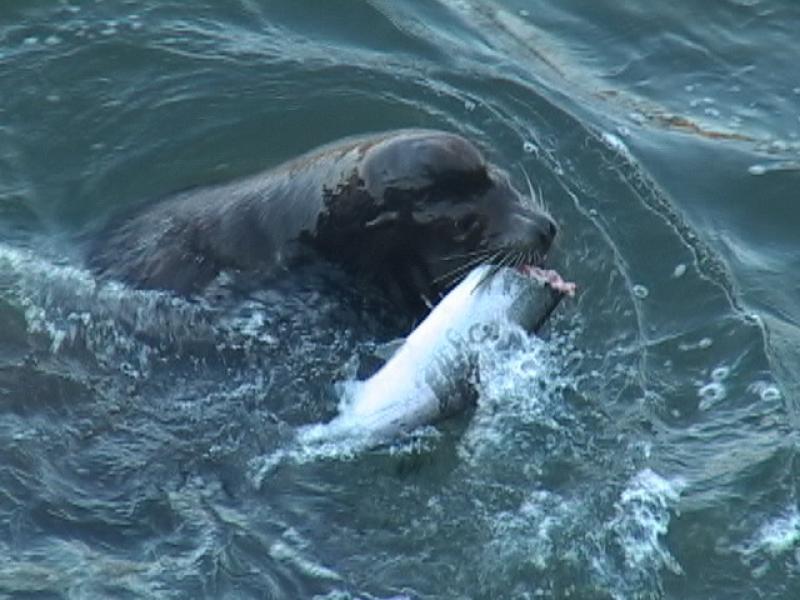 California sea lions documented as repeatedly preying on threatened salmon and steelhead near Willamette Falls on the Willamette River can be removed and euthanized, under authorization NOAA Fisheries granted to the Oregon Department of Fish and Wildlife (ODFW) yesterday.

The authorization is one element of ongoing efforts by ODFW, NOAA Fisheries, tribes, and many local and watershed groups to protect and recover threatened upper Willamette River steelhead and upper Willamette River Chinook salmon, which are also affected by a variety of factors, including dams, habitat loss, and other predators.

“This is an action we believe is urgently necessary to protect these highly vulnerable fish populations. It is a choice we wish we did not have to make, but at this point it is a necessary step to improve survival of these fish that we all want to see recover,” said Chris Yates, Assistant Regional Administrator for Protected Resources in NOAA Fisheries’ West Coast Region. “The science tells us that the sooner we act to reduce predation, the better we will protect the fish and the fewer sea lions that would have to be removed in the long run.”

ODFW applied to NOAA Fisheries in October 2017 for authorization to remove individually identifiable California sea lions that are having a significant negative impact on salmon and steelhead that migrate up the Willamette River past Willamette Falls. Under the provisions of the Marine Mammal Protection Act, NOAA Fisheries convened a task force of representatives from federal and state agencies, tribes, and conservation and fishing organizations to review the application.

NOAA Fisheries received almost 800 public comments on the application during a 60-day public comment period in late 2017. The task force voted in October 2018 to recommend approval of ODFW’s application, also suggesting that individual California sea lions could be removed after they are documented as preying on threatened salmon or steelhead in the area of Willamette Falls for two days.

Lethal removal of sea lions is a last resort. Wildlife managers would first seek a home for the removed sea lions at zoos or aquaria. If no home can be found, they may euthanize the animals.

Predation on these threatened salmon and steelhead has grown with the increased population of California sea lions on the West Coast, which biologists now consider healthy and robust. A population assessment published early this year found that the number of California sea lions rose from fewer than 90,000 in 1975 to more than 300,000 in 2012, before declining to a current estimate of about 258,000 as ocean conditions changed.

NOAA Fisheries’ most recent stock assessment for California sea lions estimates that up to 9,200 animals could be removed while still allowing the population to maintain its maximum productivity. At Willamette Falls, state officials could remove no more than 1 percent of that figure – a total of 92 California sea lions – each year.

Research published in December 2016 examined similar predation by California sea lions on threatened salmon and steelhead near Bonneville Dam on the Columbia River. The study concluded that the sooner wildlife agencies remove specific sea lions identified as preying on at-risk fish, the more likely they will reduce the spread of that behavior to other animals and the fewer sea lions that would ultimately have to be removed.

The findings highlighted the need to act early “from both a conservation and management perspective to prevent the spread of a detrimental behavior and to minimize the total number of animals removed,” the scientists wrote in the paper published in the journal Proceedings of the Royal Society B.

NOAA Fisheries will also publish a notice in the Federal Register further describing ODFW’s application, the evaluation process, and determination in the coming weeks.