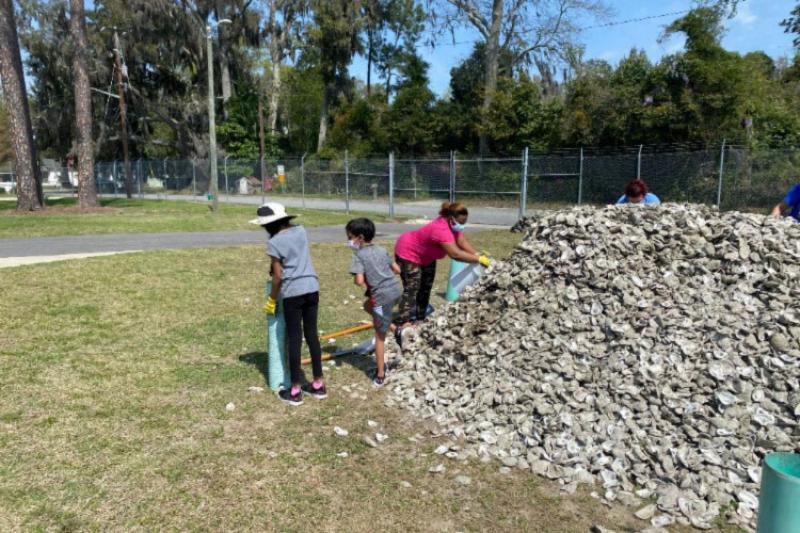 With a depleting shoreline and rising sea levels, scientists in coastal Georgia have been looking to further protect their shorelines with oyster reef habitat restoration. Restoring oyster reef habitats has been a point of focus for the health of Georgia’s salt marshes and ongoing coastal protection.

Staff from NOAA’s Southeast Fisheries Science Center are working with partners at the Georgia Department of Natural Resources on two oyster reef restoration projects. Funded by a Coastal Incentive Grant from the Georgia Department of Natural Resources, two Savannah State graduate students are building and monitoring oyster reefs. One project focuses on the growth of the oyster habitat reef restoration through the construction of a biodegradable hardscape. The other project focuses on developing methods using uncrewed aerial systems to monitor the restored reefs and compare them to natural reefs. Three phases of restoration have allowed the combination of monitoring and cultivating oyster growth. The goal of this data is to reveal the ongoing importance of reef restoration and promote effective techniques for restoring habitats.

To grow oyster populations under the Coastal Incentive Grant, NOAA Living Marine Resources Cooperative Science Center and Savannah State University students worked with our team to construct biodegradable hardscapes for oyster reef habitats. This material was coined “Oyster Catcher” by The Sandbar Oyster Company. It is a human-made structure that helps support the growth of oysters. Results are promising because the biodegradable hardscapes showed higher average oyster density and rugosity (a measure of surface complexity) than natural or shell bag reefs. They have a slightly lower catch per unit effort and diversity than natural reefs.

The use of technology has been allowing our team to monitor both natural and restored oyster reefs for long-term success. Cameron Atkinson and Shaneese Mackey, graduate students from Savannah State University, are soaring above to get aerial data collections of the Georgia oyster populations.

The Importance of This Data Collection on Oyster Reef Habitats

Georgia’s coastline runs approximately 100 linear miles, with approximately 368,000 acres of estuarine tidal marsh. The data collected on oyster reef habitats is important because it gives scientists the leverage to understand how they can better sustain the state’s coastline and marsh areas. This will provide Georgia with better natural protection from adversities due to climate changing alterations such as sea-level rise.

Oyster reef habitats have helped combat these issues by creating stable bottoms to prevent erosion, by offering other species with homes, enhancing water quality, and providing storm protection. These restoration projects have shown positive impacts in other areas, such as the Chesapeake Bay Oyster Restoration. All of the data collected through these projects on oyster reef habitats are crucial to the adaptive management needed for the protection of the Georgia coast.