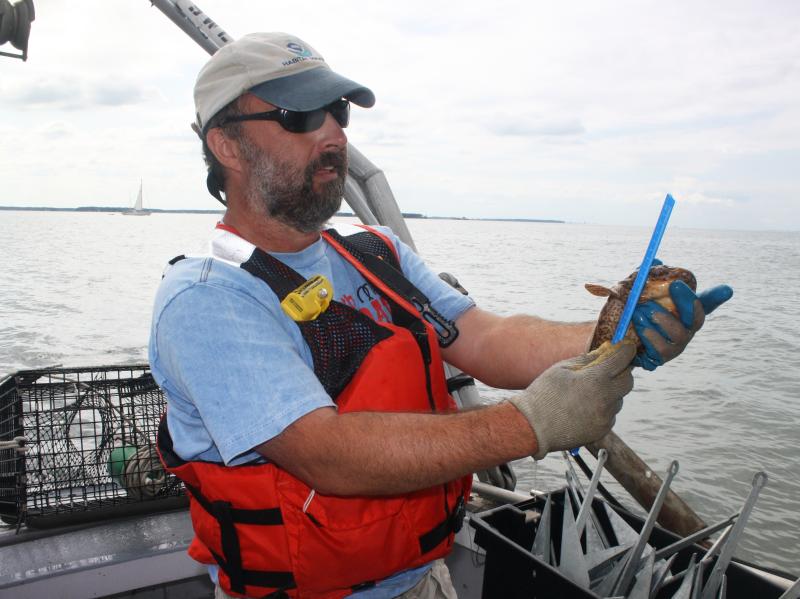 Scientists from the NOAA Chesapeake Bay Office carried out field research on how fish—like this oyster toadfish—and crabs use restored oyster reefs for habitat.

NOAA Fisheries scientists and their partners at several other academic and research institutions explored how restored oyster reefs help the Chesapeake Bay. They have released their findings in a new NOAA Fisheries Technical Memorandum. The report quantified how oyster reefs improve water quality and provide habitat, as well as supporting commercial fishing and local economies.

The report includes information from Oyster Reef Ecosystem Services projects in both Maryland and Virginia that were carried out or funded by the NOAA Chesapeake Bay Office. The projects focused on quantifying the benefits that restored oyster reefs bring to the ecosystem and people.

Chesapeake Bay is home to the largest oyster restoration effort in the world. NOAA and our partners are working to restore healthy oyster populations and habitat in 10 tributaries by 2025. In just one of these tributaries—Harris Creek on Maryland’s Eastern Shore—350 acres have been restored. That’s roughly the size of the National Mall in Washington, D.C.

It’s important to quantify the benefits these vibrant oyster reefs provide. This helps us better understand the critical roles the reefs play in a healthy Chesapeake Bay and how they support the blue economy.

Restored oyster reefs help the ecosystem in multiple ways. Here are some of the benefits the researchers found.

One of the things oysters filter from the water is nitrogen. This can help the ecosystem because too much nitrogen in the water can fuel potentially harmful algae blooms. Successful restored reefs are expected to remove about seven times as much nitrogen each day than unrestored sand/mud bottom areas can.

In Harris Creek (Maryland) alone, restored reefs each year remove nitrogen equivalent to roughly 20,000 bags of 10-10-10 garden fertilizer. That’s 12 piles of fertilizer bags stacked on top of each other, each pile equal in height to the Washington Monument.

Reefs are good places for blue crabs and fish to hide from predators.

Blue crabs use reefs for forage, and Chesapeake Bay watermen have long set crab traps and trotlines near them for harvest to take advantage of this. Research found that white perch, silver perch, and striped bass like to eat species that live on or near oyster reefs.

On restored reefs in the Chesapeake Bay that had a high density of oysters, there were, on average, more than 5,000 macrofauna in a square meter. Underwater video indicates that oyster restoration has resulted in oyster reefs that are taller and more complex than harvested reefs, providing habitat for a greater diversity of species.

When mature, these restored reefs could boost annual dockside seafood sales by $11 million annually in Dorchester and Talbot counties. These are the two Maryland counties bordering the waterways where oyster reef restoration occurred. Through these initial sales and the subsequent respending of these dollars in the regional economy, total annual sales impacts could increase by $23 million. This could support more than 300 additional jobs in the area.

The NOAA Fisheries Tech Memo includes summaries of each of the projects, as well as discussion of findings in several themes that cut across multiple projects. We will continue to work with partners on large-scale oyster reef restoration projects in the Chesapeake Bay.