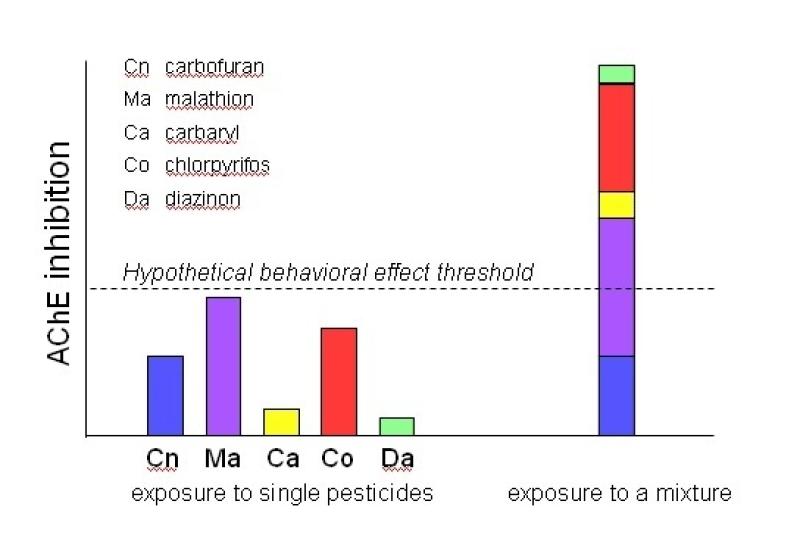 This graph shows the hypothetical difference between the effects of an individual pesticide and pesticide mixtures on salmon brain function, as indicated by the degree to which the pesticide(s) inhibit function of an important enzyme acetylcholinesterase (AChE). As seen here, the potential neurobehavioral toxicity of the pesticide mixture can be additive or, if greater than the sum of its parts, synergistic.

Complex mixtures of pesticides commonly occur in fish habitats. Studies have shown that over 90% of waterways affected by urban or agricultural land uses contain two or more pesticides.

Adding it Up: Deadly synergy

In a new study published this month in Environmental Health Perspectives, Center researchers and their collaborators evaluated the effects of 5 of the most extensively used pesticides in the Pacific Northwest and California—diazinon, malathion, chlorpyrifos, carbaryl, and carbofuran—on the brains of juvenile coho salmon.

Nearly every pairing of the five pesticides inhibited activity of an important brain enzyme, acetylcholinesterase, after the salmon were exposed over a 96-hour period. This enzyme plays a critical role in several neurological pathways, and at reduced levels can diminish fish survival and even cause death.

As the doses of individual pesticides increased, the synergistic effects were almost uniformly more pronounced. For some chemical combinations, the data suggest synergistic effects are possible at concentrations below the lowest levels used in the study. No salmon died when exposed to an individual pesticide, yet many died outright when exposed to combinations. The most deadly pairing was diazinon and malathion.

A Challenge to Salmon Recovery Efforts

This study shows that the in vivo toxicity of pesticide mixtures is additive and, in certain combinations, synergistic. Mixtures of pesticides in fish habitats may pose a more important challenge to recovery efforts than previously anticipated, as testing individual pesticides to determine “safe” exposure levels may not capture the true risk to salmon.