Many salmon rivers around Puget Sound have experienced increasing fluctuations in flow over the past 60 years, just as climate change projections predict – and that's unfortunate news for threatened Chinook salmon, according to a new analysis of salmon survival and river flow. 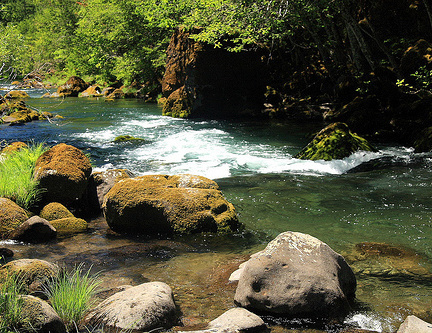 More pronounced fluctuations in flow can scour away salmon eggs and exhaust young fish, especially when lower flows force adult fish to lay eggs in more exposed areas in the center of the channel. The new study published in the peer-reviewed journal Global Change Biology says such increased flow variability has the most negative effect on salmon populations of several climate factors considered.

"There's more flooding in late fall and winter," said Eric Ward, an ecologist at NOAA Fisheries' Northwest Fisheries Science Center and lead author of the research. "This is happening when the eggs are in the gravel or when the juveniles are most susceptible."

The good news is that many salmon habitat projects restore and reopen side channels and floodplains that provide rearing habitat for young salmon and refuge from fluctuating flows. Actions to reduce stormwater runoff in ways that allow water to infiltrate and move more slowly through the ground can also ease flooding and peak flows that otherwise threaten salmon redds.

While many studies have examined the expected impacts of climate warming on wildlife, the new research is one of only a few to evaluate the impacts of increased climate variability.

"We're not talking just about warmer temperatures, but a more variable environment with more extremes on either side," said Joseph Anderson, a fisheries biologist at the Washington Department of Fish and Wildlife and coauthor of the new research. "As these extremes get farther apart, the result is a negative impact on salmon."

Climate models predict increasingly severe storms and droughts and, in the Pacific Northwest, more precipitation falling as rain instead of snow. That translates into rivers and streams that rise and fall more sharply and more often, making life harder for young salmon that hatch and spend their first few months in freshwater before migrating to the ocean. Rain falling on snow in fall or winter months can melt the snow and produce particularly sudden increases in stream flow.

The research found that fluctuations in river flow have already become more pronounced in many rivers around Puget Sound. Since 1950 the variation in winter flows has increased in 16 of 20 salmon rivers examined, with 11 rivers including the Skykomish, Elwha, Snoqualmie, Skokomish and Puyallup showing statistically significant increases of about 35 percent. The increased variation has occurred even with no change in the average overall winter flow.

"It's basically the same amount of water, but it's coming more sporadically than before," Ward said.

The researchers weighed several climate factors in freshwater and the ocean to determine which had the greatest effect on salmon populations. The freshwater factors included overall winter flows, peak flow timing and winter flow variability. The ocean factors included upwelling of nutrient-rich water and the Pacific Decadal Oscillation, a large-scale marine temperature pattern. Of all the factors, variation in winter river flows had the strongest influence on salmon populations, reducing their growth rate.

That does not mean that high river flows are all bad, Anderson noted. In fact, flooding often helps create and maintain salmon habitat by reopening side channels and replenishing spawning gravels. But at some level and in some conditions fluctuations may begin to take a toll on salmon populations.

"Rivers are dynamic environments, and some level of variability is to be expected in natural systems," Anderson said. "The point here is that as strong variability becomes more common, it eventually begins to have a negative influence on populations."

Feature Story ,
West Coast
West Coast
Threatened California Central Valley steelhead will benefit from a new Habitat Conservation Plan for the Calaveras River. Steelhead are the migratory form of rainbow trout that travel to the ocean and back to complete their life cycle.
Feature Story