In Puerto Rico, NOAA scientists are working with partners on a study with the local fishing community to better understand queen snapper and habitat interactions. 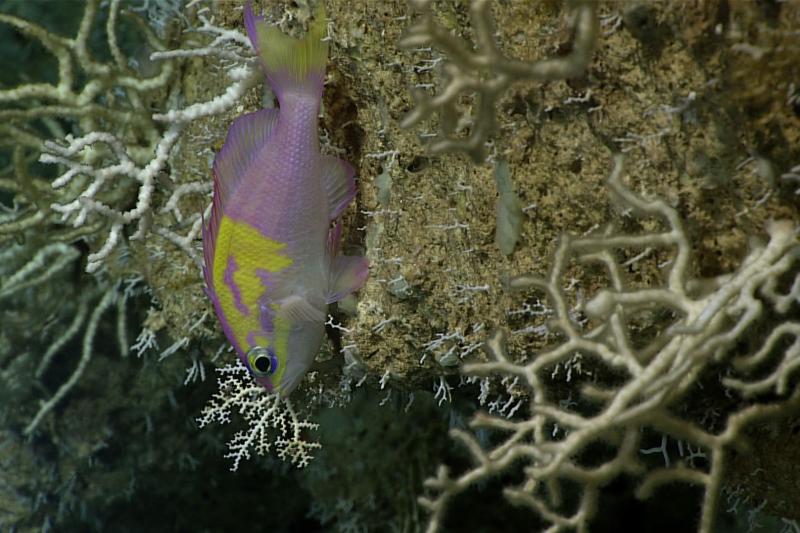 In 2014, researchers exploring the waters around Puerto Rico found fish such as this roughtongue bass among structure-forming corals on the seafloor. Scientists are studying the ways in which fish interact with corals to better understand deep-sea ecosystems. Credit: NOAA Ocean Exploration

Our ocean is full of complex interactions among marine organisms, many of which are still not well understood. During the 2016–2019 Southeast Deep Coral Initiative, NOAA’s Deep Sea Coral Research and Technology Program and partners conducted many studies to better understand these ecosystems. One was a pilot project, that included partners at NOAA's Southeast Fisheries Science Center, local scientists, and academic researchers at University of South Carolina Aiken, to examine relationships between fish and deep-sea corals off the coast of Puerto Rico.

Scientists age bony fish by studying their otoliths—small calcium structures that allow the fish to hear and sense vibrations in the water. In this study, scientists compared the radiocarbon signatures locked in fish otoliths and eye lenses. They used this information to help determine the age of a commercially important fish, the queen snapper. Researchers found that the queen snapper can grow as old as 45 years in Caribbean waters. That’s much older than their original estimate of 8 years!

Snapper and grouper are economically important in Puerto Rico. The Caribbean Fishery Management Council ranked this group of species as the highest priority for deep-sea research. Due to their large size and flavor, queen snappers are a favorite catch. However, little is known about this species’ life history, distribution patterns, or interaction with their seafloor habitats, like deep-sea corals.

Anglers are frequently on the water, making them key partners in helping assess the health of local fisheries. Kate Overly and Andy David—NOAA scientists at the Southeast Fisheries Science Center—worked with local anglers to study habitat connections between queen snappers and deep-sea corals.

Researchers had two main goals for this project:

Queen snappers inhabit waters from 100 to 500 meters deep, so, the researchers selected sites in this depth range to sample the fish along the seafloor. Anglers also deployed GoPro® cameras to film at the different depths and record the snappers interacting with deep-sea corals.

To collect the queen snappers, anglers deployed identical vertical hooks and lines across the sites, all with the same type of bait. These are fishing lines with 12 hooks that are unspooled via an electronic reel and kept in place by a bottom-weight. Anglers allowed the hook and line to soak for 30 minutes in hopes of catching a queen snapper for biological analyses. Days on the water were long and laborious. Anglers not only had to collect the fish, but they also had to extract their otoliths and eye lenses with the help of local fisheries observers to determine the snappers’ ages.

Otoliths grow throughout a fish’s life, forming alternating rings of opaque and translucent material. In smaller fish, the otolith’s rings are more widely spaced, signifying periods of rapid growth. As the fish get older, the growth rate slows down, resulting in narrower rings. “This pattern of thick and thin otolith growth rings is similar to the rings of a tree,” remarked Andy David. To help researchers determine the age of each fish, the observers first removed the otoliths from the snappers’ heads, then dried and shipped them to be studied. Scientists used traditional light microscopy techniques and radiocarbon signatures to age the snapper.

From the 1950s to around 1970, there was an uptick of radioactive carbon in the atmosphere from nuclear weapons testing. Over time, some of this carbon has been absorbed by the ocean and deposited in biological structures such as hard-coral skeletons, fish eye lenses, and fish otoliths. However, queen snapper otoliths are incredibly small, fragile, and hard to read, making the aging process difficult. The researchers needed to work around this problem by choosing another anatomic structure to age the fish—the snapper’s inner eye.

Queen snapper eyes contain many layers of lenses, all of which are stacked around a “core.” This core is developed during the first year of the fish’s life. The researchers peeled the layers of the lenses “like an onion,” describes Kate Overly, until reaching the carbon-dense core. They then sent the cores to a research facility at the Woods Hole Oceanographic Institution. Staff processed the specimens and returned data on the radiocarbon signatures in the eye. This is when they validated that queen snappers can live to a surprisingly old age.

Throughout this project, researchers not only studied the biology of snappers, but also observed the fish interacting with their deep-sea environment. Researchers combined information on the coral assemblages collected from the GoPro® cameras with multi-beam sonar maps in the region developed by NOAA Ocean Exploration. Videos of the seafloor revealed that deep-sea corals are often present in the same areas as queen snappers, signifying a possible relationship between the two ocean inhabitants. The research team is still analyzing biological data and developing models of these interactions. This will help identify connections between species in deep-sea ecosystems and provide information needed to sustainably manage fisheries.

This portion of the research was supported by NOAA’s Deep Sea Coral Research and Technology Program. The program supports research needed to conserve and manage the deep-sea coral and sponge ecosystems that sustain much of our ocean’s diversity.

Last updated by Office of Habitat Conservation on December 10, 2021