NOAA-funded research shows that a diet of poultry meal and algae oil could be just as good for aquaculture fish as fishmeal and fish oil. 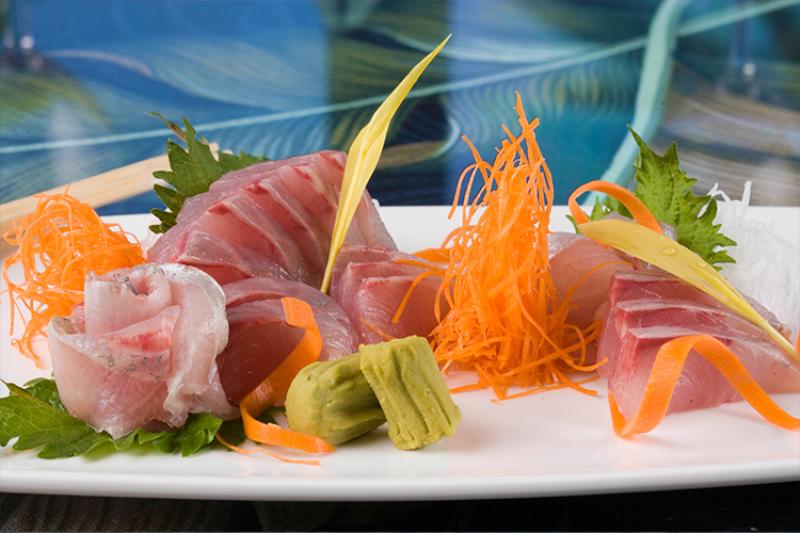 In a groundbreaking study, researchers have successfully raised a carnivorous fish on a diet free of fishmeal and fish oil without any harmful effects. The kampachi (Hawaiian yellowtail, almaco jack) were raised on a diet of feed-grade poultry meal and a fish-free oil blend high in omega-3 fatty acids. They were not only as healthy as those grown on traditional feed but also more flavorful in blind taste tests.

Funded by a NOAA Saltonstall-Kennedy grant, the research was detailed in a technical report in the Global Aquaculture Alliance's Advocate. The achievement may ultimately help expand aquaculture by decreasing reliance on fish-derived feed.

“We now no longer need to feed fish [with fish] to grow fish,” says Neil Anthony Sims, CEO of Ocean Era (formerly Kampachi Farms), a mariculture company based in Kailua-Kona, Hawai‘i, where the trial was conducted. The research team also includes co-principal investigator Rick Barrows of Aquatic Feed Technologies, Ocean Era’s Helen Meigs, and Kelly Alfrey from Future of Fish Feed (F3), a collaborative effort toward fish-free aquaculture feeds. “We were able to disconnect the production of delicious and nutritious marine fish from any marine fish protein and oil.”

The new feed formulations are publicly available online through the F3 Feed Innovation Network. The effort helps lay the groundwork for future fish-free-feed research. It may lead to even better diet formulations as more scientists study the new diet and try to replicate the results.

Aquaculture accounts for more than half of the global edible seafood supply, according to the United Nations Food and Agriculture Organization (FAO). And production is expected to increase by more than a third between 2016 and 2030. As the fastest growing food-producing sector, aquaculture will likely play a major role in feeding a growing global population.

Many aquaculture facilities raise fish and other animals on a diet consisting, at least partly, of fishmeal and fish oil. These are vital sources of nutrients for energy and tissue growth. The ingredients often come from wild-caught bony, oily, forage fish such as anchovy, herring, mackerel, and sardines.

Research suggests that the aquaculture industry produces three to four times as much fish as it consumes. But the reliance on fish feed products, and the process of catching wild fish to feed cultured fish, limit the necessary growth and sustainability of the aquaculture industry, the report notes. Forage fish are a vital part of the food chain for many animals, and the prices of fishmeal and fish oil derived from them are expected to rise, according to the FAO.

“If we are going to scale up aquaculture, we can’t do it on the backs of anchovies and sardines,” Sims says. “There isn’t enough fish to do it, and the price of [fishmeal and fish oil] would be astronomical. It would make the farmed fish products unaffordable.”

Therein lies the problem: How do we continue to scale up responsible aquaculture when it relies so heavily on fishmeal and fish oil?

→ Watch this video about the research

Researchers have been working to solve this problem for many years. Black soldier flies, algae, and soy, among other things, have all been subjects of intense research in this field. (Ocean Era has received support from the Nebraska Soybean Association and the United Soybean Board, as well as the USDA).

In a previous Saltonstall-Kennedy-supported study, Ocean Era developed a fishmeal-free formula from food-grade poultry meal. But this ingredient is relatively expensive and is better suited for human food like chicken sausages, they realized. For the team’s latest research, they instead replaced fishmeal with low-cost poultry meal, a byproduct of the poultry industry that typically is used in pet food.

“We need to look at optimizing the use of byproducts from other agricultural industries,” Sims says. “What is the best and highest use of feed-grade poultry meal? We suggest upcycling these nutrients and amino acids into poultry meal that is fed to fish that then becomes nutritious, healthy food.”

For their fish oil substitute, they turned to a Dutch company called Veramaris, which recently opened a $200 million facility in Blair, Nebraska. In 2019, Veramaris won the second F3 Fish-Free Feed Challenge, which tasked participants with developing and selling fish-free oil substitutes. Veramaris’ winning concoction was an algae oil with double the EPA and DHA as fish oil.

The first F3 challenge focused on fish-free fishmeal. In 2017, the Chinese Guangdong Evergreen Feed Industry Company won the challenge with their mix consisting of soybean, rapeseed, and peanut meal.

To test their new kampachi feed, the researchers randomly distributed 480 juvenile kampachi into 16 tanks. For 3 months, they fed the fish one of four diets:

They found that the kampachi raised on the new poultry-meal and algae-oil feed formulation performed as well as those fed the commercial diet. They had similar results over the first 2 months in terms of:

The fishmeal-free diet (with fish oil) also achieved comparable results. But the spirulina feed suffered from rancidity, so the team disregarded the data.

The researchers then conducted blind taste trials between the commercial diet and the fish-free diet. “It’s always critically important to us to not only get the growth performance right but also the flavor profile,” Sims says.

Though the team did not use a “rigorous scientific tasting panel,” the results were nonetheless dramatic: 62 percent of participants preferred the kampachi grown on the fish-free diet. Additionally, 19 percent preferred the commercial diet and another 19 percent couldn’t tell the difference between the fish.

Importantly, the feed’s poultry meal costs almost 60 percent less than fishmeal. Veramaris’ algae oil was not exactly inexpensive due to its novelty, but its cost will drop as the company begins to mass produce the oil, the report notes.

“It's inspiring to see the innovation going into feed research and the promising results of these trials,” Spence-McConnell says. “I'm excited to see further research and replication as these formulations continue to be developed."

Ocean Era is partnering with a feed company to develop a commercially viable adaptation of their formula. They plan to test the fish-free feed formulation at Velella Epsilon—a proposed demonstration net pen project for the Gulf of Mexico. The ultimate goal is to help grow the world’s aquaculture industry sustainably.

“We strive to soften humanity’s footprint on the seas,” Sims says. “This [research] is a significant step in that direction.”

This project is supported by a grant from the Saltonstall-Kennedy Grant Program. The program funds projects that address the needs of fishing communities, optimize economic benefits by building and maintaining sustainable fisheries, and increase other opportunities to keep working waterfronts viable. Learn about Saltonstall-Kennedy grants and other funding opportunities in the Pacific Islands Region.