Maps of coral cover overlaid with locations of human activities revealed that nearshore development has a strong negative impact on corals. 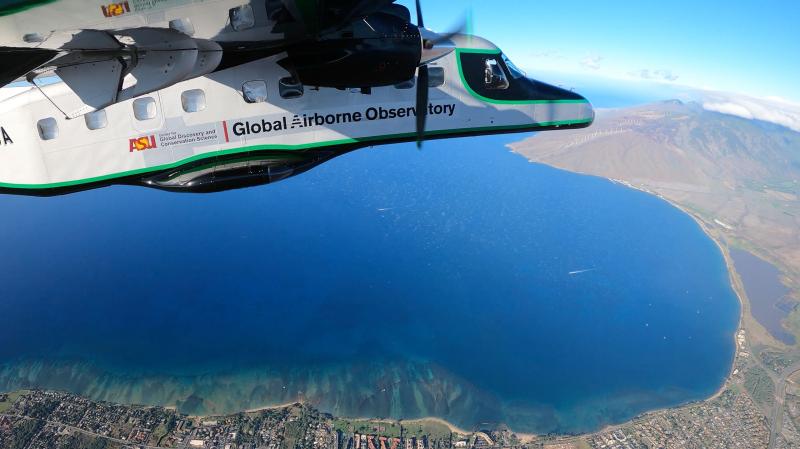 Researchers used aerial imagery and artificial intelligence for the first time to map coral across the main Hawaiian Islands in a study published in PNAS. From January to February of 2019, scientists with Arizona State University flew an aircraft-based laboratory around each of the main Hawaiian Islands to collect data. This data mapped, within a 2-meter resolution, live coral cover down to about 53 feet (16 meters). They found that nearshore coastal development had a major negative impact on corals due to increased pollution and sedimentation.

Traditional coral mapping methods include satellite-based imagery and ship and in-water surveys. Researchers have used these methods to map coral reefs in the main Hawaiian Islands before. However, they have not been able to gain the spatially continuous distribution of live coral cover that this new method provides.

“Never before has there been such a detailed overview of live corals at this scale,” said co-author Jamison Gove. “These findings are foundational for developing place-based conservation and management strategies to promote reef persistence and mitigate further losses in corals across Hawaiʻi.”

The mapping effort captured a lot of data. It would normally take a scientist years to sort through all of the data collected from the Hawaiʻi coastline and identify the live coral. By then, the data would be out of date.

Here is where artificial intelligence comes in. Scientists trained AI tools, otherwise known as deep learning models, to sort through the data and distinguish coral from rocks, clouds, and waves. They used existing images of coral to train the deep learning model. The model compared those images to the aerial images taken on this new effort. Once the model correctly identified coral, scientists used it to analyze the data and map the coral.

Coral reefs around the main Hawaiian Islands are home to a diverse array of species. They are critically important to the local economy, history, culture, and environment. At the same time, they are undergoing drastic changes from ocean warming and nearshore human activities. This threatens the many services corals provide to local communities and many others including coastal protection, fishing, and cultural practices.

As part of this aerial effort, scientists assessed the resulting maps for the condition of the corals. Some reef areas had live coral cover even after repeated stressors, such as marine heatwaves. This indicated there may be coral that are more resilient to stressors than others. Mapping these more resilient coral reefs can help researchers identify areas most in need of protection. It can also help researchers assess underlying drivers of coral resilience.

In an effort to identify what is affecting coral cover, scientists compared coral cover to:

NOAA’s West Hawaiʻi Integrated Ecosystem Assessment program mapped human activities across the Hawaiian Islands. The program integrates all components of an ecosystem, including human needs and activities, into the decision-making process so that managers can balance trade-offs.

Researchers integrated the maps of live corals with some of these human activities. They used computer algorithms to estimate which factors best predict where corals are currently found on Hawaiian reefs. The results of the analysis revealed that nearshore development has a major negative relationship with live corals.

Analysis revealed that nearshore development has a major negative relationship with live corals. It causes hot spots of sedimentation and waterborne pollutants, which can smother or kill the corals. Fishing and other ocean activities have caused declines in reef resilience.

"Operational mapping of live coral cover within and across Hawaiʻi’s reef ecosystems affords opportunities for managers and policy-makers to better address reef protection, resilience, and restoration,” said Brian Neilson, head of the State of Hawaiʻi Department of Land and Natural Resources Division of Aquatic Resources and study co-author. “With these new maps, we have a better shot at protecting what we have while focusing on where to improve conditions for corals and the myriad of species that depend upon corals.”

Scientists will continue to research coral cover and monitoring in support of management activities to increase reef resilience and ecosystem sustainability.