Coral Health and Threats in the Pacific Islands

Similar to coral reefs around the world, corals in the Pacific Islands are especially vulnerable to changing climate, diseases, and human impacts. 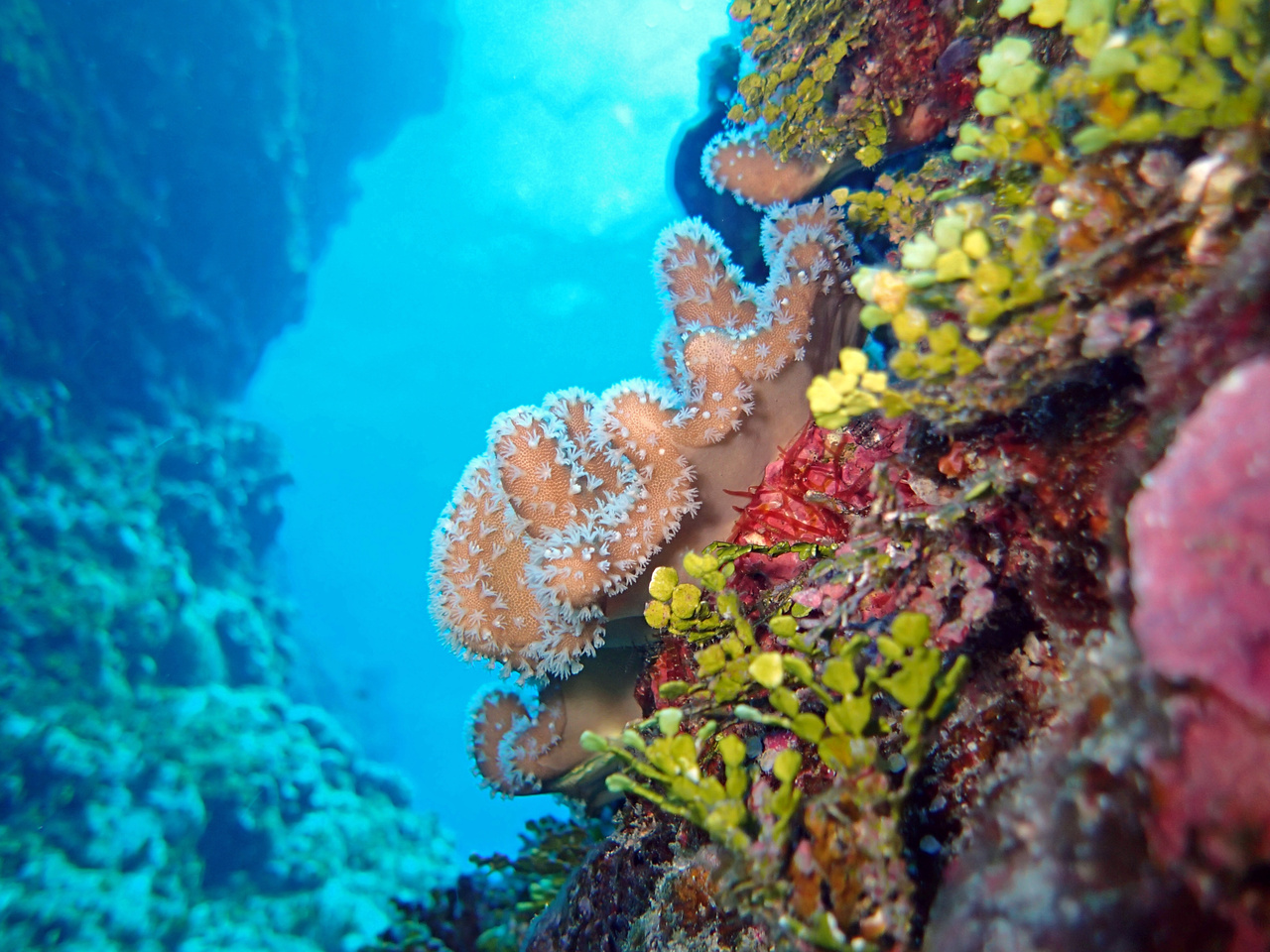 From larger, populated islands like Oahu to small, remote islands like Jarvis, the reefs surrounding islands and atolls in the Pacific are impacted by changes in the surrounding ocean and terrestrial watersheds. Everything that starts on land or in the air can impact the health of the coral reefs.

Despite the unflattering images that many people often associate with seaweeds, marine macroalgae are actually among the most diverse, ecologically important, common, and beautiful organisms in tropical reef systems. The delicate balance between corals and macroalgae on reefs can indicate the overall health of the ecosystem. When corals are damaged, turf algae are among the first organisms to grow on vacant substrate and cover nonliving reef. 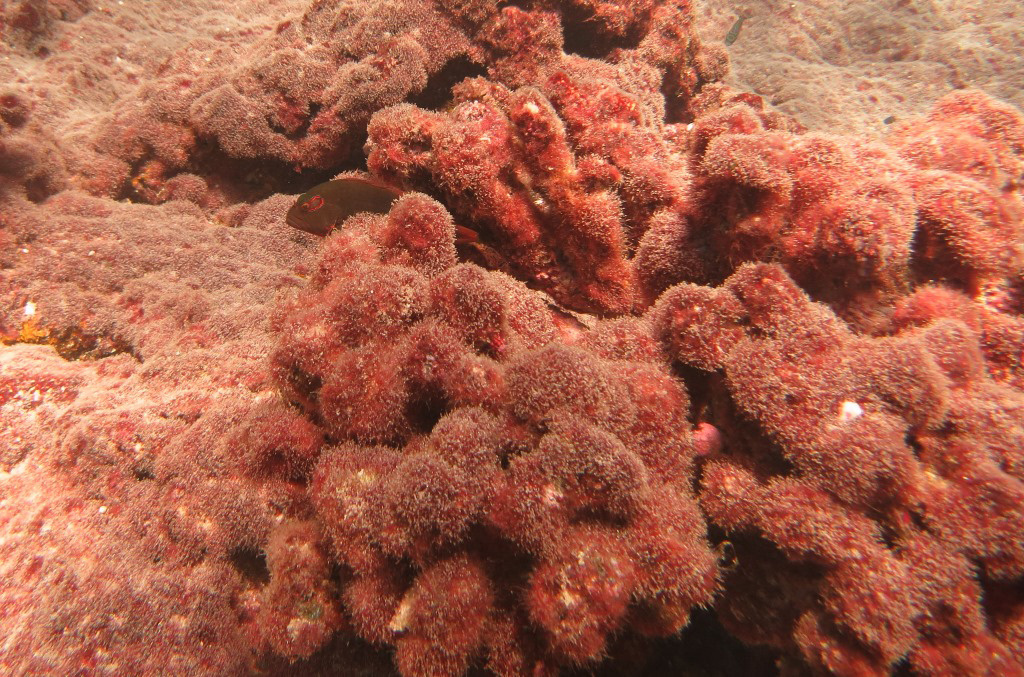 Increased algal growth can outcompete living corals for space on the reef, but these seaweeds can also create essential habitat for juvenile fish and invertebrates. Turf algae and other non-calcifying seaweeds are an important food source for herbivorous fishes and invertebrates—species that help maintain the balance between corals and algae in a healthy ecosystem. Relatively fast-growing crustose coralline algae act as glue on reefs, cementing loose components of a reef system together, and can serve as a surface for larval baby corals to settle and grow. 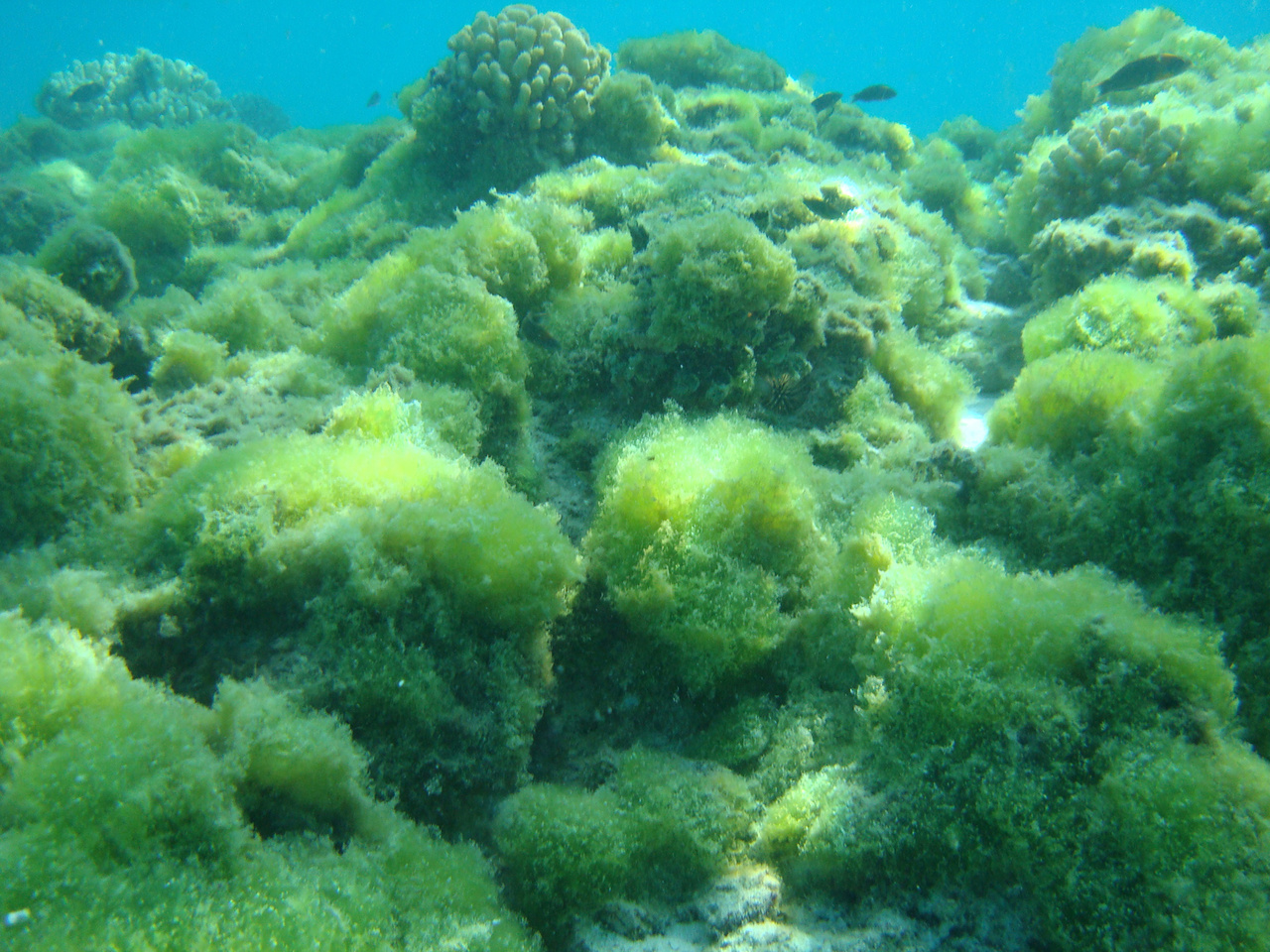 The alga Boodlea dominated many areas of the Kure Atoll lagoon surveyed during the 2009 RAMP expedition and overgrew some coral colonies (Photo: NOAA Fisheries/Peter Vroom). 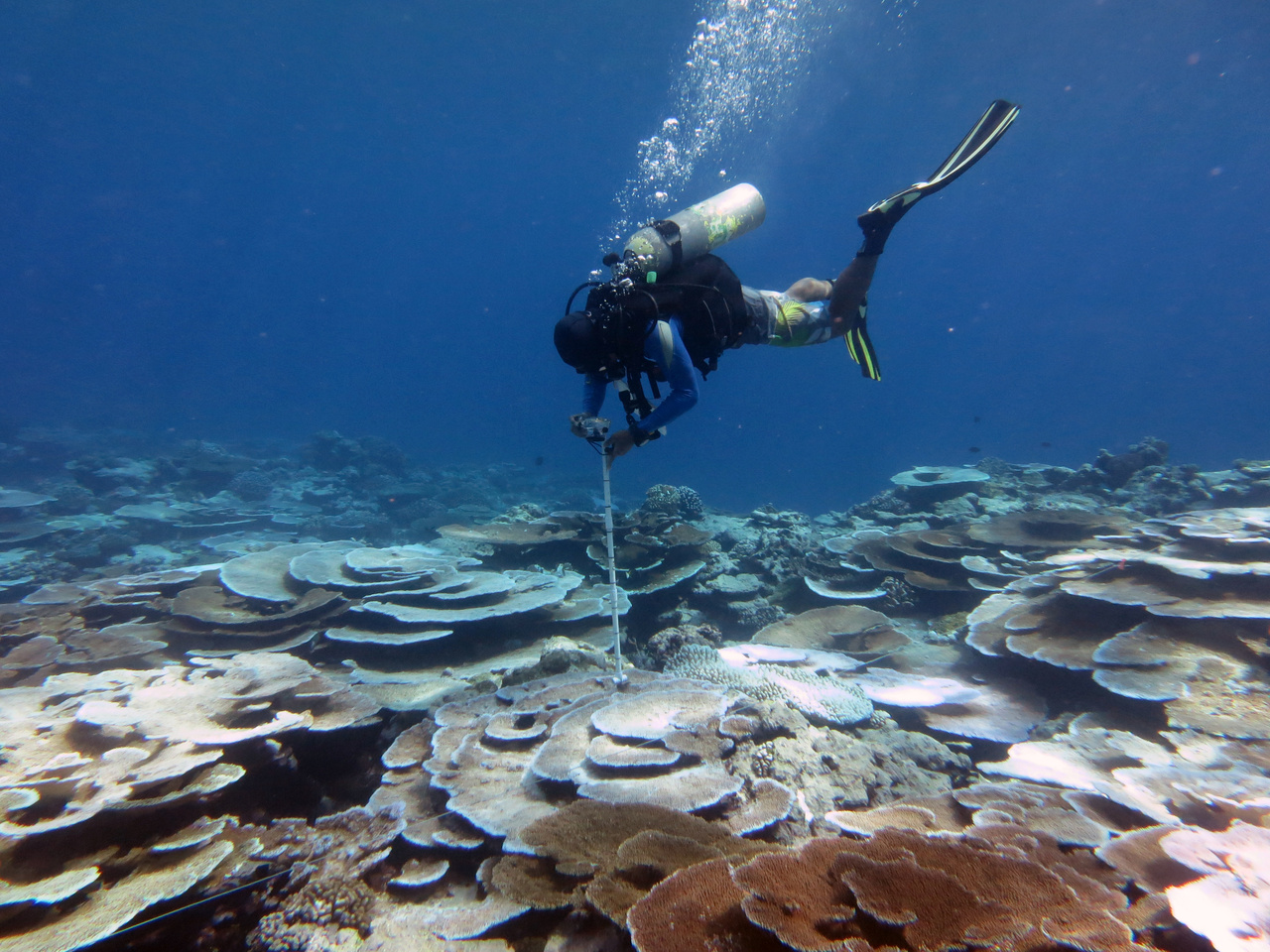 The symbiotic algae (zooxanthellae) that live in corals are what give healthy corals their variety of different colors. When the coral host is stressed, its colorful zooxanthellae expels from its tissues, causing the coral to appear pale or white—a process known as coral bleaching. Severe bleaching is usually associated with environmental stress, such as unusually warm (or cold) water temperatures, increased light or solar radiation, changes in salinity, sedimentation, or other pollution from land. Though bleaching does not mean the coral is immediately dead, if it persists it can impair normal functions of the coral host and lead to coral death (mortality), which has devastating impacts on the ecosystem. After an intense El Niño in 2015–2016 led to the longest global coral bleaching event on record, our scientists documented significant coral mortality in the Pacific Remote Islands in 2016 and 2017.

Coral diseases can also cause rapid tissue loss. These diseases are commonly referred to as “white diseases,” and result in partial or complete coral mortality. Significant disease outbreaks and associated coral losses have been reported in all reef systems worldwide. In the Pacific, there was no documentation or data on coral bleaching or disease for many of the U.S. Pacific Islands, before our scientists traveled to these remote regions to document coral loss and investigate the causes. For more detail on coral diseases and our survey methods: Standard Operating Procedures: Data Collection for Rapid Ecological Assessment Benthic Surveys (NOAA Technical Memorandum, August 2018).

Corals also experience chronic, slow-progressing diseases. While these lesions do not cause rapid tissue loss, they still result in reduced fitness of the corals, including lowered growth rates, reproductive output, and immune capacity.  Little to no documentation or data on coral health existed for many of the U.S. Pacific Islands, before our scientists traveled to these remote regions to document coral loss and investigate the causes. For more detail on coral diseases and our survey methods, Standard Operating Procedures: Data Collection for Rapid Ecological Assessment Benthic Surveys (NOAA Technical Memorandum, August 2018).

In addition to impacts from the surrounding ocean environment, sometimes threats to coral health can come from other living reef inhabitants. One of the greatest biological disturbances to coral reefs is an outbreak of crown-of-thorns sea stars. These sea stars are found throughout the Indo-Pacific region, from the Red Sea to the western coast of Panama. Reaching up to a half meter in diameter, a crown-of-thorns sea star is the largest tropical sea star and its favorite prey is corals. 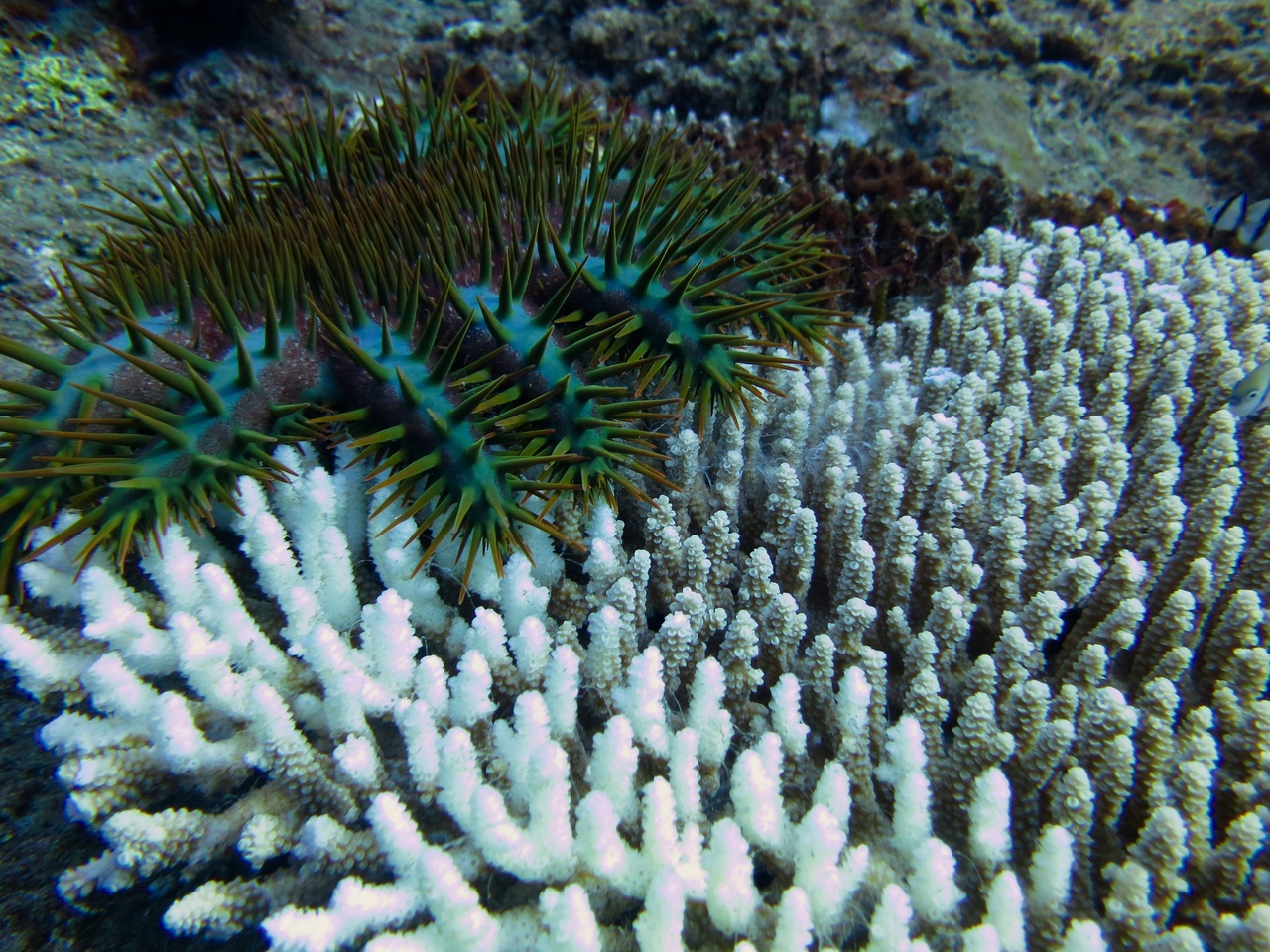 Crown-of-thorns sea stars consume the coral tissue cover the surface of a colony, leaving behind the bare coral skeleton. In low densities, crown-of-thorns have little effect on coral reefs. However, when they aggregate and form large densities or outbreaks, crown-of-thorns can decimate the amount of live coral on the reef, changing reef structure, freeing space for algal growth, and affecting fish populations. Although smaller and less destructive, snails and other small gastropods also feed on coral reefs and can cause scars on coral tissue. Evidence of fish predation, from small blenny bites, to the trademark white scraps left behind on the coral’s surface from grazing parrotfish, are also commonly observed in Pacific reefs. 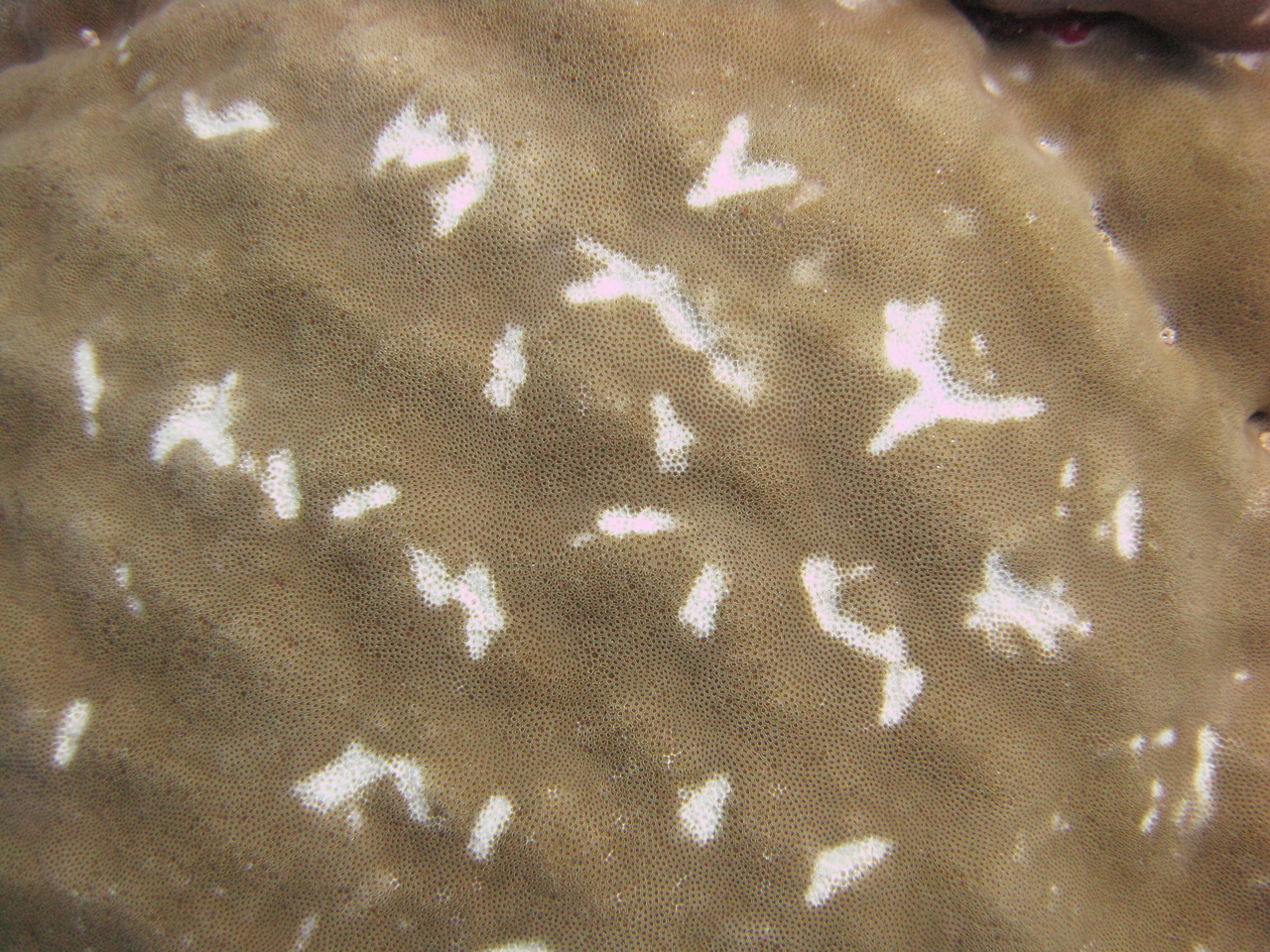 Plant-eating or herbivorous reef fish, such as the bumphead parrotfish, graze on the macroalgae and thereby help maintain the balance between slow-growing corals and fast-growing algae in thel reef ecosystem. Different types of herbivores play different roles in balancing a reef ecosystem—from detritivores that clean detritus from algae, to browsers that eat larger fleshy seaweeds, and excavators that scrape algae from the reef. Overfishing can throw off this balance between reef fish and their coral reef habitat.

From the ridge to the reef, pollution from the land (land-based sources of pollution)—runoff, sedimentation, and nutrients—eventually flows to the sea. Elevated underwater cloudiness or turbidity and sedimentation are perhaps the two principal drivers of coral reef degradation worldwide. Turbidity reduces light, which corals need (corals have microscopic algae in their tissues and, like plants, need light to make their own food). Sediments directly deposit and accumulate over the coral surfaces causing partial or total death. Like chronic diseases, excess sediments and turbidity reduce the fitness of individual corals, interfering with vital functions and potentially making corals more susceptible to disease. Land pollution can also cause nutrient loading, in which plant fertilizers or sewage and inadequate wastewater management introduce excessive nitrogen and phosphorus. Excess nutrients promote algal growth, which can smother corals and reduce the amount of dissolved oxygen, and is often associated with an increased amount of bacteria. 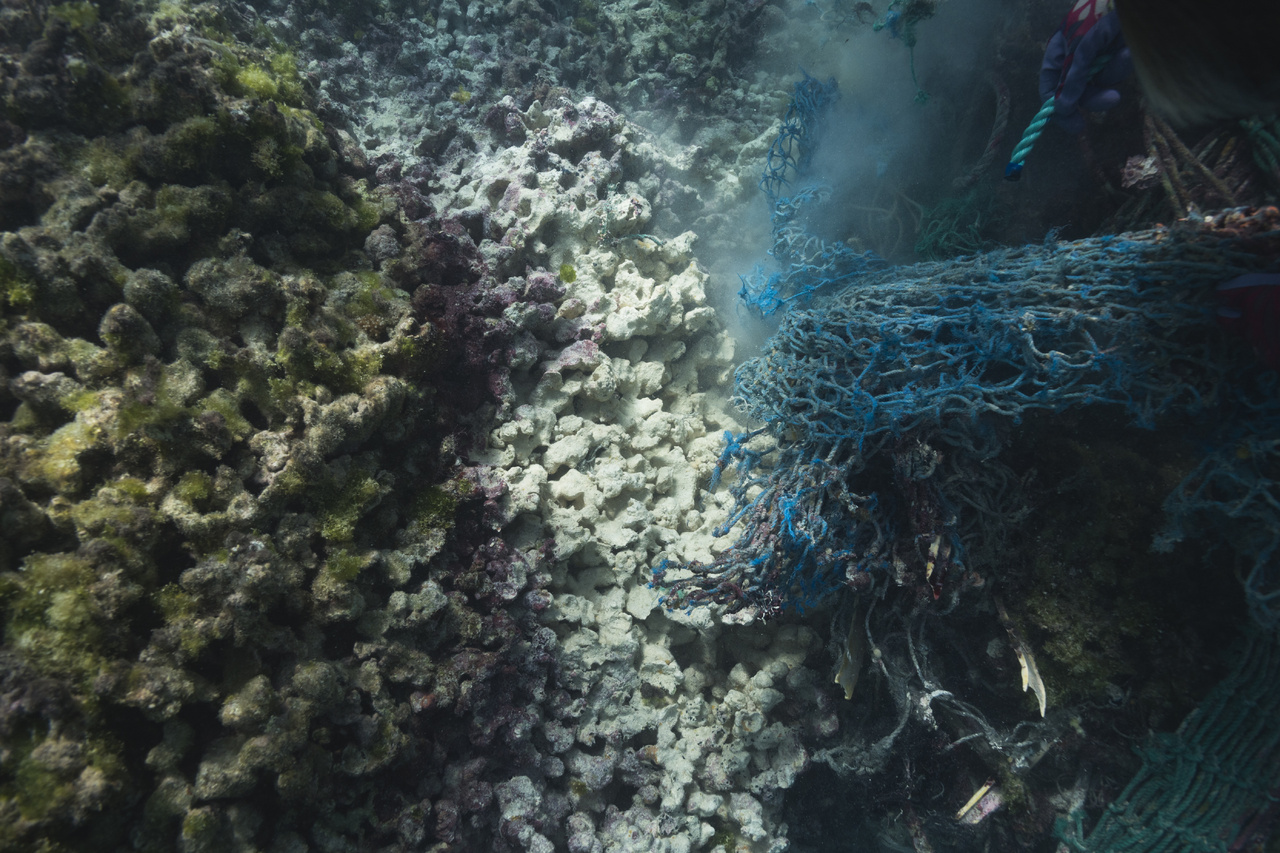 Coral reefs around small islands and atolls act like a filter or comb to catch marine debris, including derelict fishing nets and gear, from surrounding ocean currents. When entangled on a reef, this marine debris damages corals. It can even grow into the reef structure, smothering the living coral.