Wrapping up the 2019 field season after 3 months of field camps in the Northwestern Hawaiian Islands. 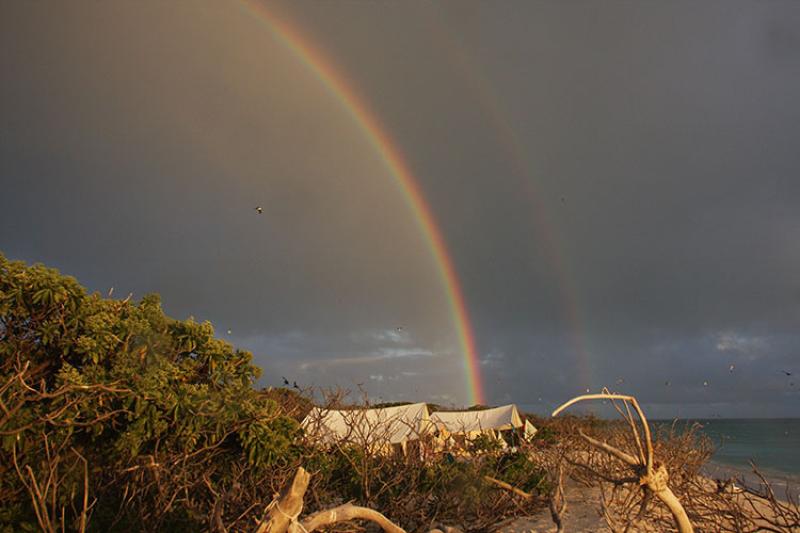 NOAA field biologists returned to Honolulu after 3 months at remote camps in the Northwestern Hawaiian Islands. They researched and rescued some of the most iconic and endangered species in Hawaiʻi—Hawaiian monk seals and green sea turtles.

NOAA has operated monk seal research camps at all major breeding sites for 36 years. We have maintained French Frigate Shoals turtle nesting records, which stretch back 47 years. Several of the field researchers have been around for decades. They have some of the most consistent sets of eyes and ears in the Papahānaumokuākea Marine National Monument. They are able to observe changes in the ecosystem, improving our response to threats to these important species. 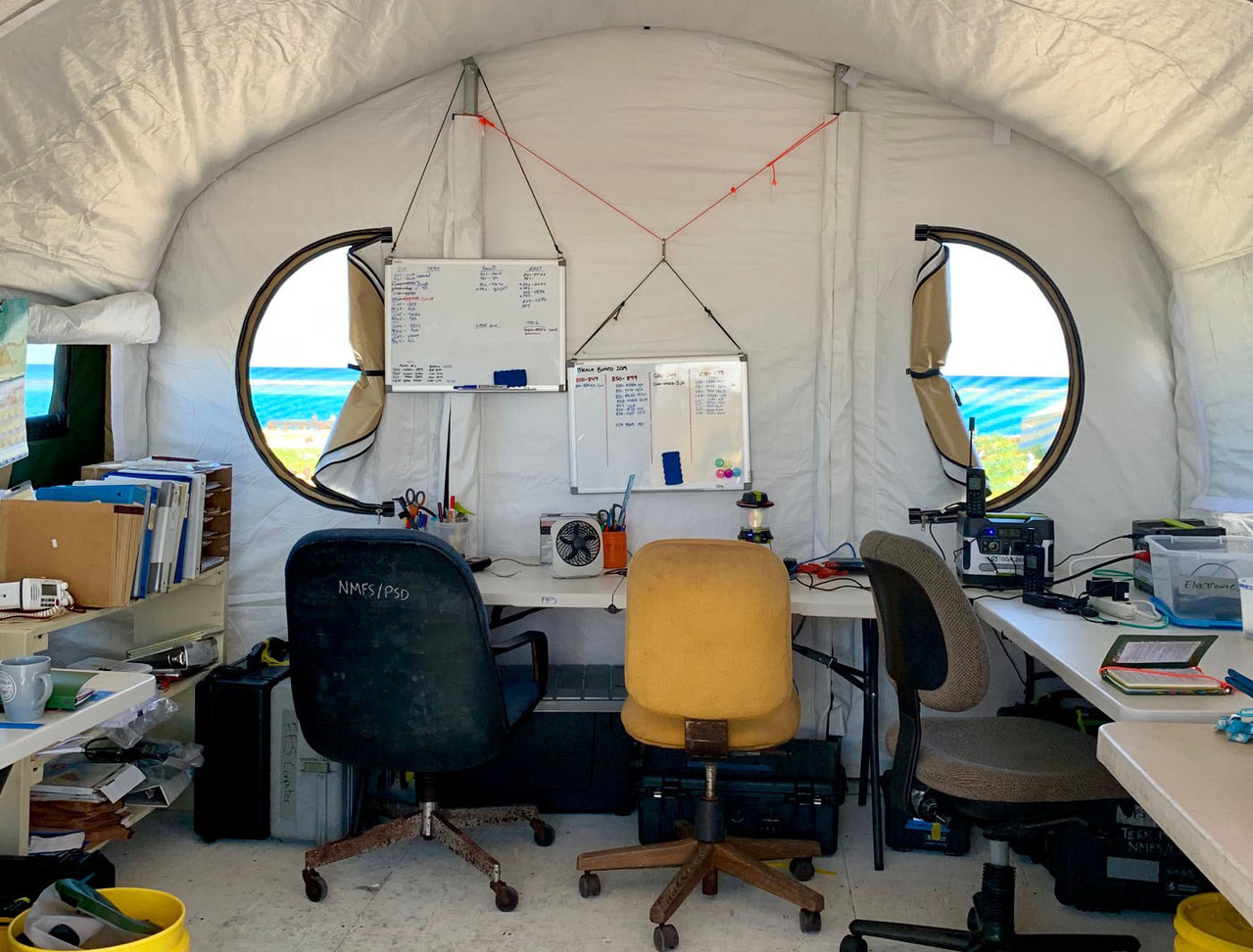 The view from inside a tent at French Frigate Shoals during the 2019 field season. Photo: NOAA Fisheries/Michelle Barbieri.

While deployed, field research teams conducted conservation activities in collaboration with the U.S. Fish and Wildlife Service and other partners. They removed marine debris and cleaned up after Hurricane Walaka. They also helped free wildlife trapped in aging structures at French Frigate Shoals and surveyed Laysan ducks at Laysan Island.

At field research camps, scientists conduct daily surveys. They identify individual animals, monitor behavior and reproductive patterns, and tag animals to track their survival and monitor threats. While each of the sites in the Northwestern Hawaiian Islands has its own challenges, this year’s field season brought some reasons for optimism. 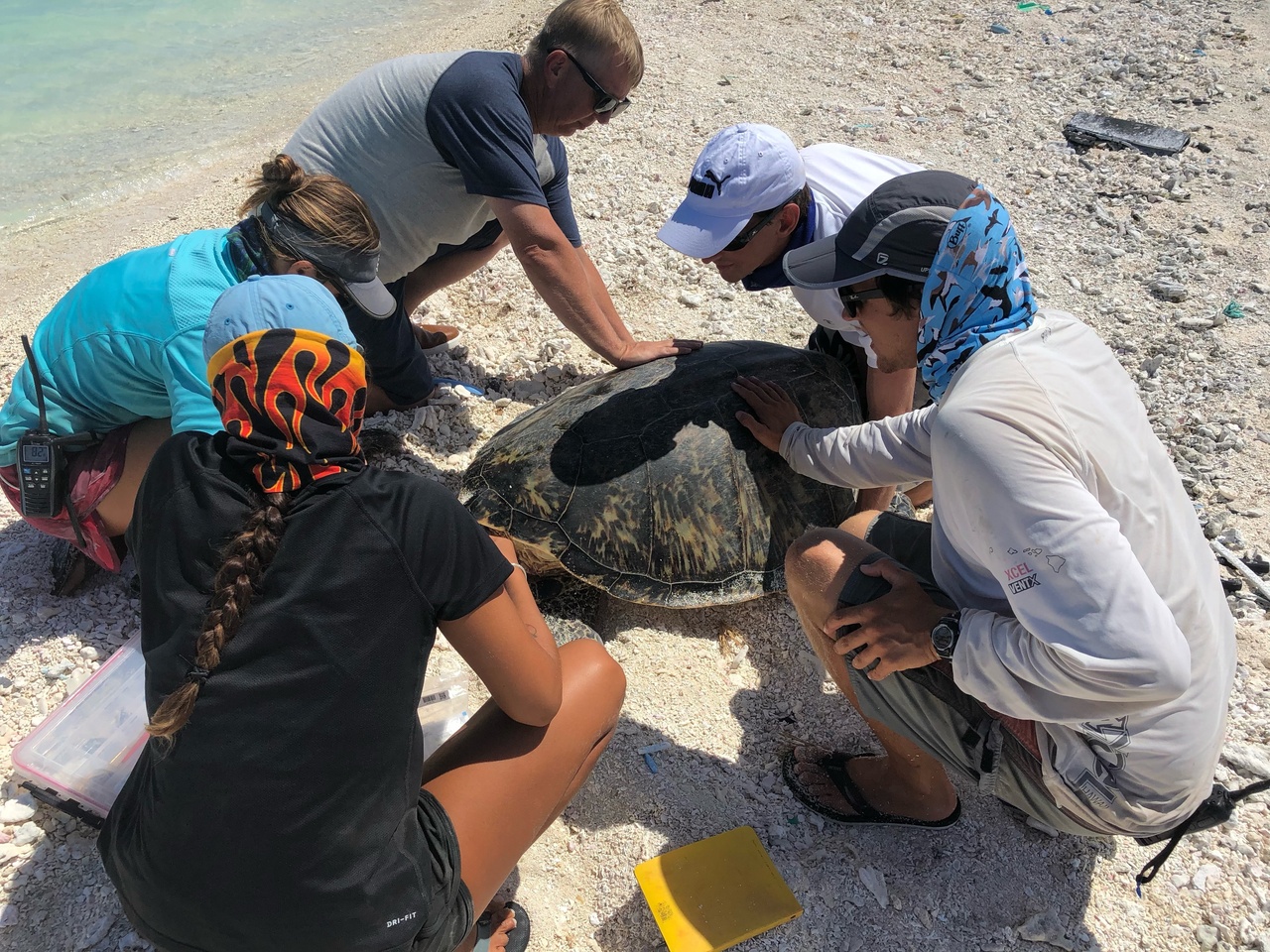 Researchers team up to tag a turtle at Pearl and Hermes Atoll.

The 3-person turtle research team added a number of innovations. For the first time in their 47-year history, the team had full survey coverage on Tern Island. They identified and numbered 251 female and 120 male green sea turtles. Including surveys at the other islets around French Frigate Shoals—East, Gin, Little Gin, and Shark Islands—they tagged 583 turtles. The researchers are still determining whether this number reflects a high or low year, or whether it was caused by the displacement of turtles from East and Trig islets, which had eroded away at the end of 2018. 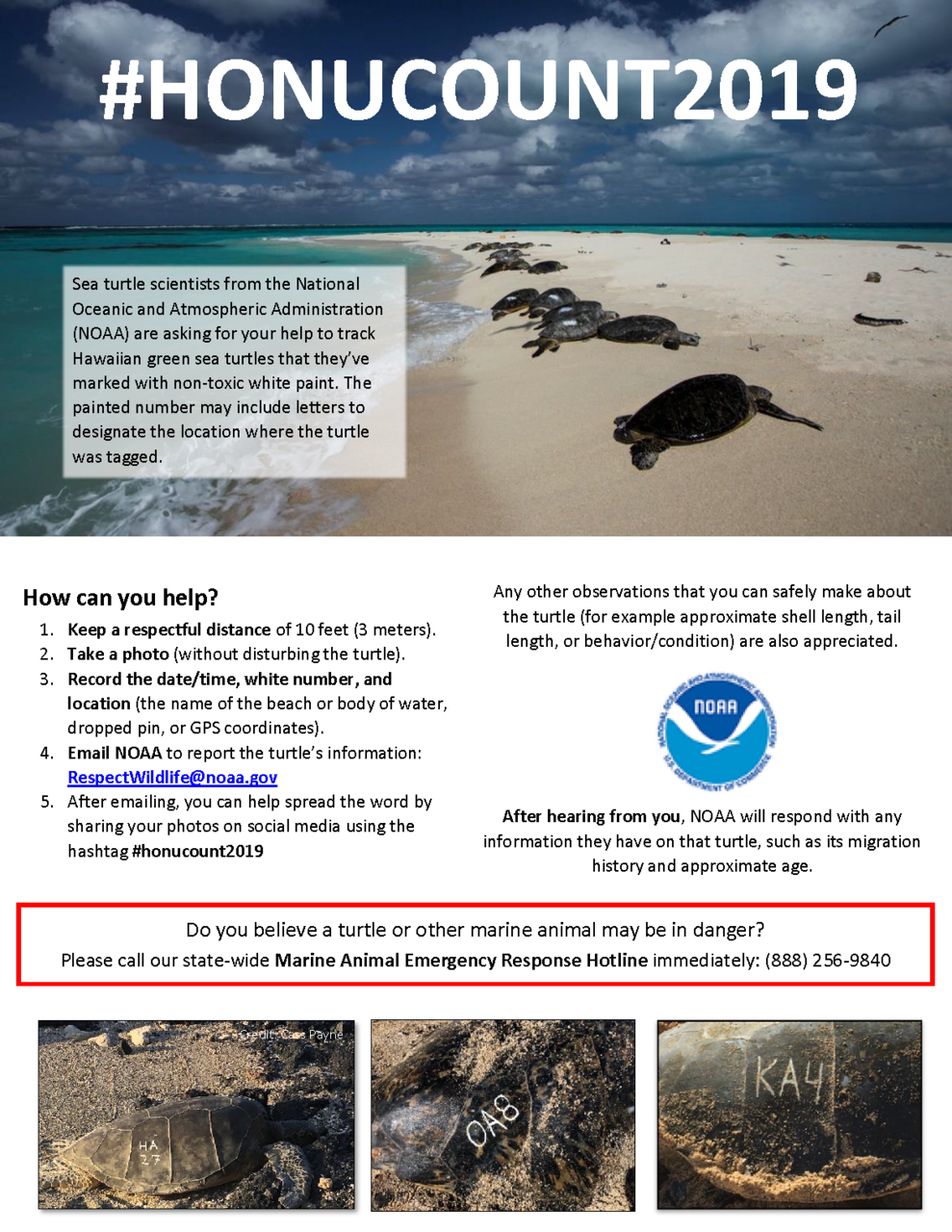 As they complete their migration back to their foraging grounds in the main Hawaiian Islands, we’re asking you to help track sightings of the numbered turtles.

In addition to the temporary numbers, the turtle research team also applied satellite telemetry tags to four turtles this season. On Oʻahu, one tag was applied to track the full migration of a female nicknamed “Motherload.” The other three tags were applied to nesting females at French Frigate Shoals. The data from these tags will help researchers understand the turtles’ foraging and nesting migrations. Three of the turtles have already returned to the main Hawaiian Islands. They are near Molokaʻi, near the entrance of Pearl Harbor on Oʻahu, and off of the North Shore of Oʻahu. 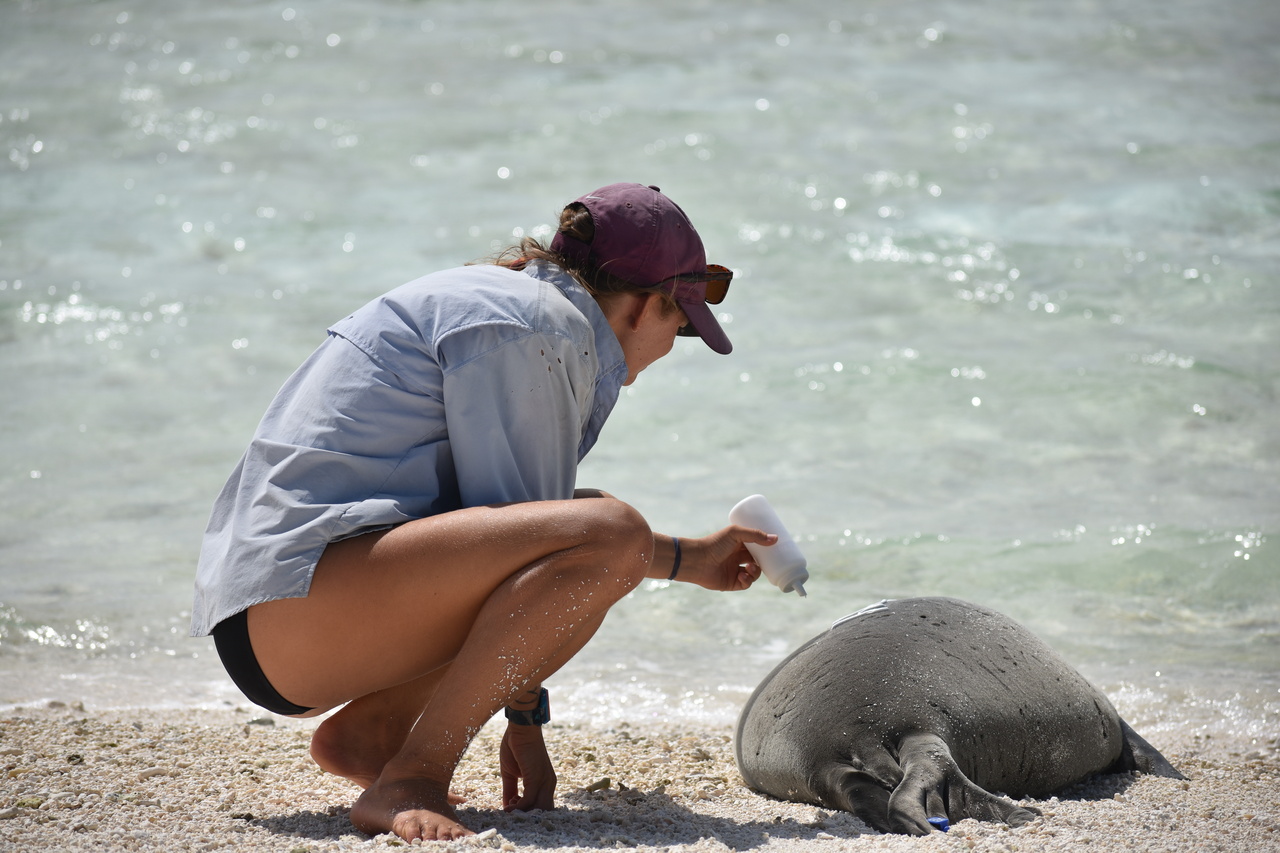 Field teams counted the number of pups born, number that survived to weaning, number marked, and number of older animals identified. They recorded inter-atoll movements, causes of mortality, and other demographic variables. They also vaccinated seals against morbillivirus at all field sites. This was a good pupping year for monk seals, with more than 140 pups born in the Northwestern Hawaiian Islands. This is around the average for the past few seasons, and it’s encouraging to see stable pupping numbers over recent years.

Even after a great pupping season, the monk seal population is still only about a third of what it was historically. But some subtle signs are encouraging for the future of the species. This year, field teams felt that weaned pups were fatter and healthier on average, and many of the juveniles seemed to be in better body condition. 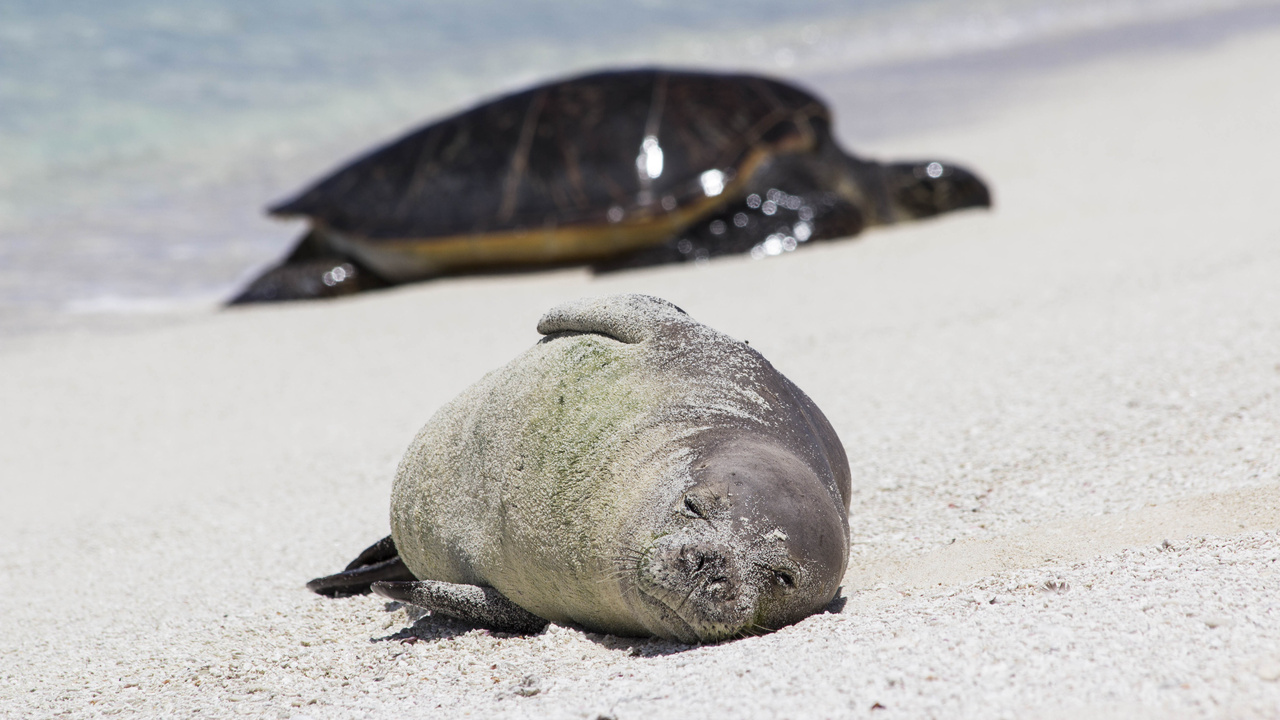 While NOAA’s scientists are in the Northwestern Hawaiian Islands they respond to life-threatening emergencies in many ways:

This year, field teams intervened to save more than 40 seals from life-threatening situations. The longer the field season, the more scientists can intervene to increase the survival of imperiled species. The payoff of these interventions extends farther than just that individual animal—their reproductive potential for the species is maintained, as well. NOAA’s research has shown that nearly 30 percent of the Hawaiian monk seal population has benefitted from life-saving interventions or is the offspring of such individuals. Below, we highlight some of our life-saving interventions.

If monk seals don’t get enough food, it leads to poor body condition and poor survival, this is especially a problem for juvenile monk seals. If an animal stops nursing too early, or has difficulty catching enough food, it may become too thin and weak to survive. It can be hard to address this problem. Through partnership with The Marine Mammal Center’s Ke Kai Ola monk seal rehabilitation hospital, we are able to bring thin young seals into care. We then return them to their home environment, robust and healthy. This year, we transported two rehabilitated seals to Laysan Island and released them back to the wild. We also captured two undersized pups from Pearl and Hermes Reef and two from Lisianski Island, and transported them to Ke Kai Ola for rehabilitation. 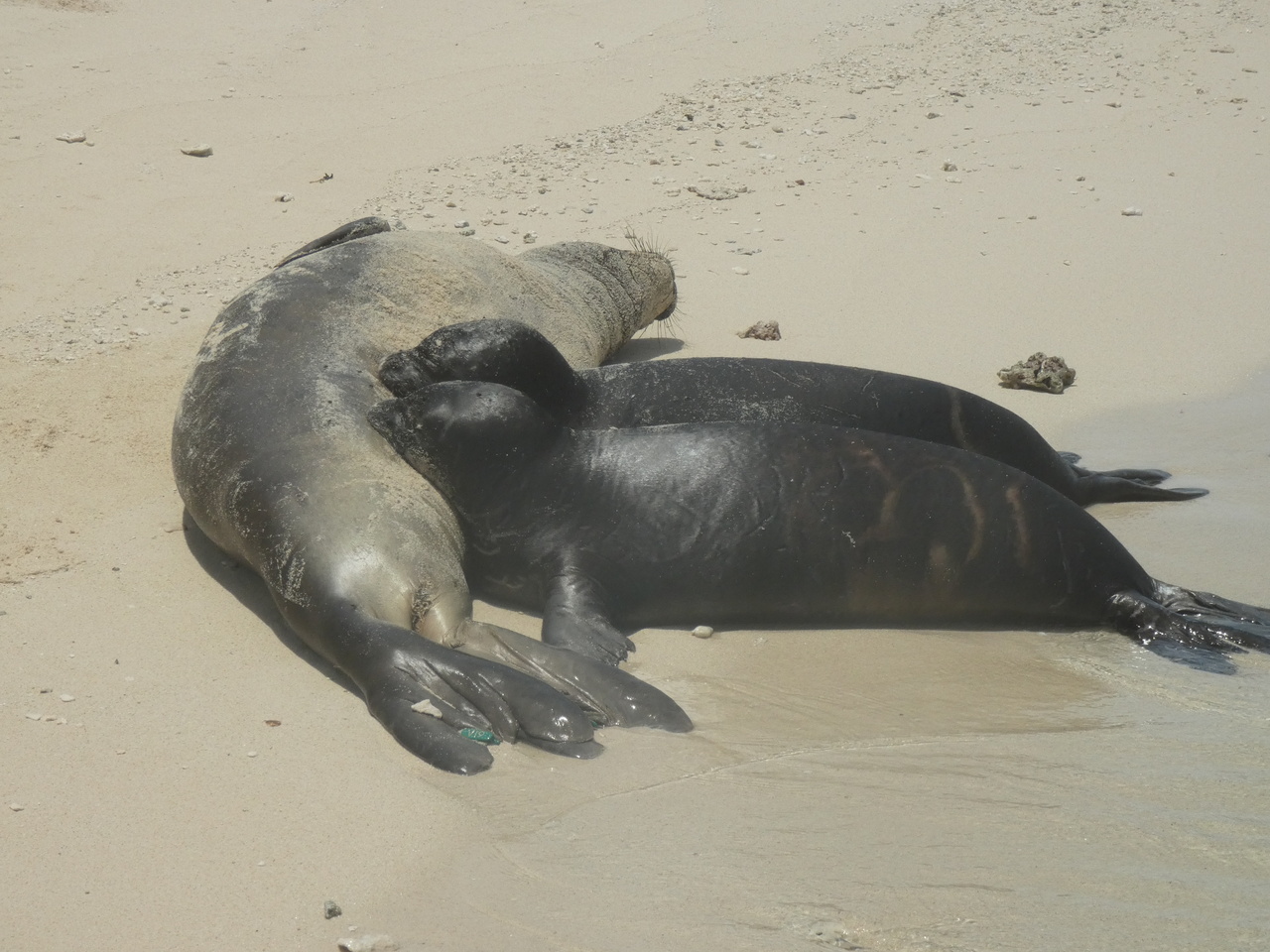 Monk seals have one of the highest debris entanglement rates of any pinnipeds. The Northwestern Hawaiian Islands are located within the North Pacific Gyre. This is a major ocean current which circulates tremendous amounts of debris and increases the risk of entanglement. Weaned pups are especially curious, which can put them in harm’s way. This year, we saw a surge of pup entanglements in hagfish eel cones. In one case, one of our staff pulled an eel cone off a pup’s nose and found a ring was there as well. This same pup got entangled in another cone several days later. This highlights the need to pick up and safely dispose of any hagfish cones or other closed rings that we might encounter on the beach. 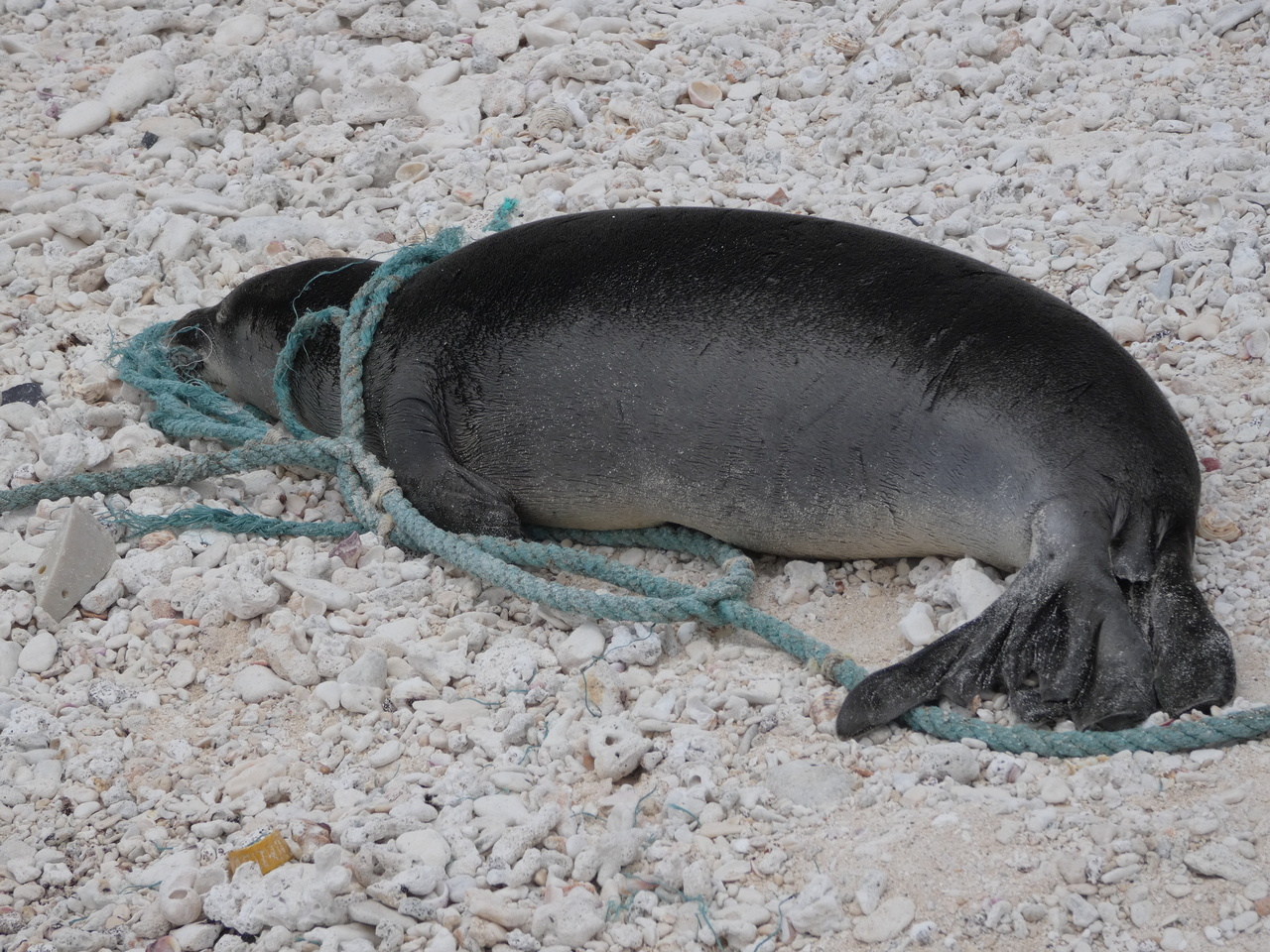 A Hawaiian monk seal entangled in a line on Laysan Island.

Aging, human-made structures are wildlife entrapment hazards at Tern Island in French Frigate Shoals. These hazards exist throughout the year, so it is all that more important for our camps to be there to help while they can. Our teams conducted daily entrapment surveys. They found and rescued about 2–3 turtles per week and more than 30 seabirds over the course of the season. Seal pups are very curious, so entrapment increased later in the season as more pups weaned and began exploring their environment. 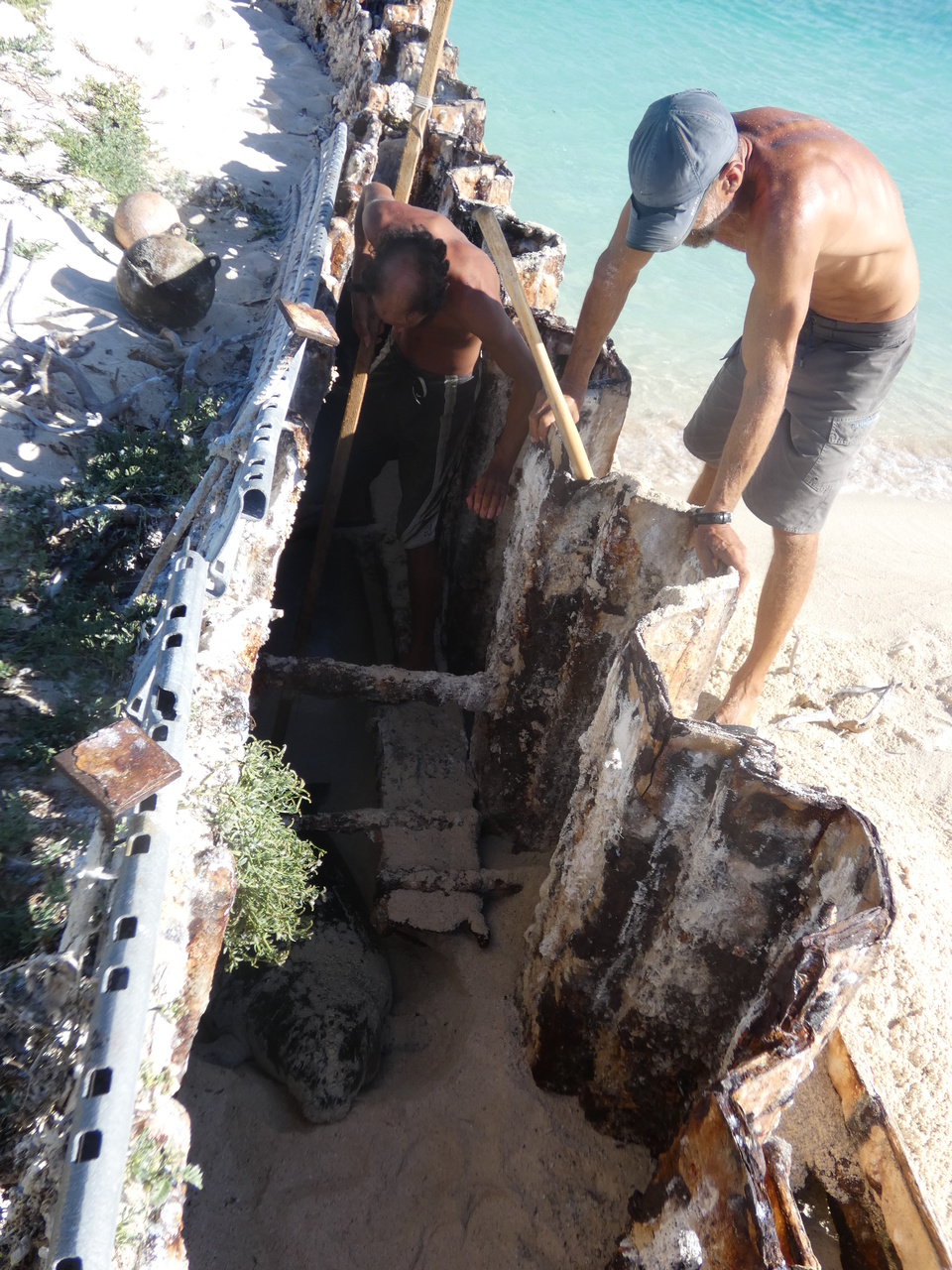 Two researchers determine how best to rescue a Hawaiian monk seal pup after the pup became trapped within the narrow confines of a degrading double seawall on Tern Island.

In one harrowing event this year, a large pup forced himself about 30 feet down a narrowing double seawall. An I-beam pinched in from above and a rising tide submerged the entry passage. When the pup was discovered, his head was just above the rising water. Sheet-pile walls were pinching his sides and the I-beam was pinching his dorsal.The only option was to work from the pup’s head and dig under him. This created more room at the sandy bottom of the tunnel for the pup to move forward to a wider area. After an hour of digging and prodding, the team released the pup from the wall.