A Continuation of Motherload: The Story of a Fertile Turtle in the Hawaiian Islands

This past March, researchers with NOAA's Marine Turtle Biology and Assessment Program located a fertile female Hawaiian green sea turtle using ultrasound, and put a satellite tag on her to see where she would migrate to lay her eggs. This is the continuation of her story. 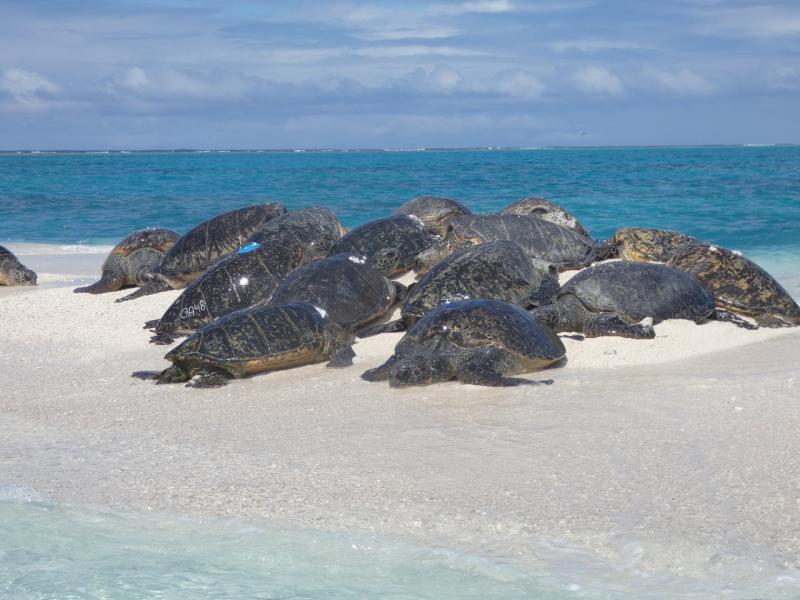 Each spring, NOAA's Marine Turtle Biology and Assessment and Hawaiian Monk Seal Research Programs begin a flurry of activity as they prepare for the deployment of their field researchers to the remote Northwestern Hawaiian Islands. The field research teams look forward to the rare opportunity to study these unique sea turtle and monk seal populations in the Papahānaumokuākea Marine National Monument.

This year, turtle researchers Marylou Staman, Leah Kerschner, and Christina Coppenrath had one more reason to look forward to their field season at French Frigate Shoals: to reconnect with a turtle that traveled over 600 miles from O‘ahu to lay her eggs. 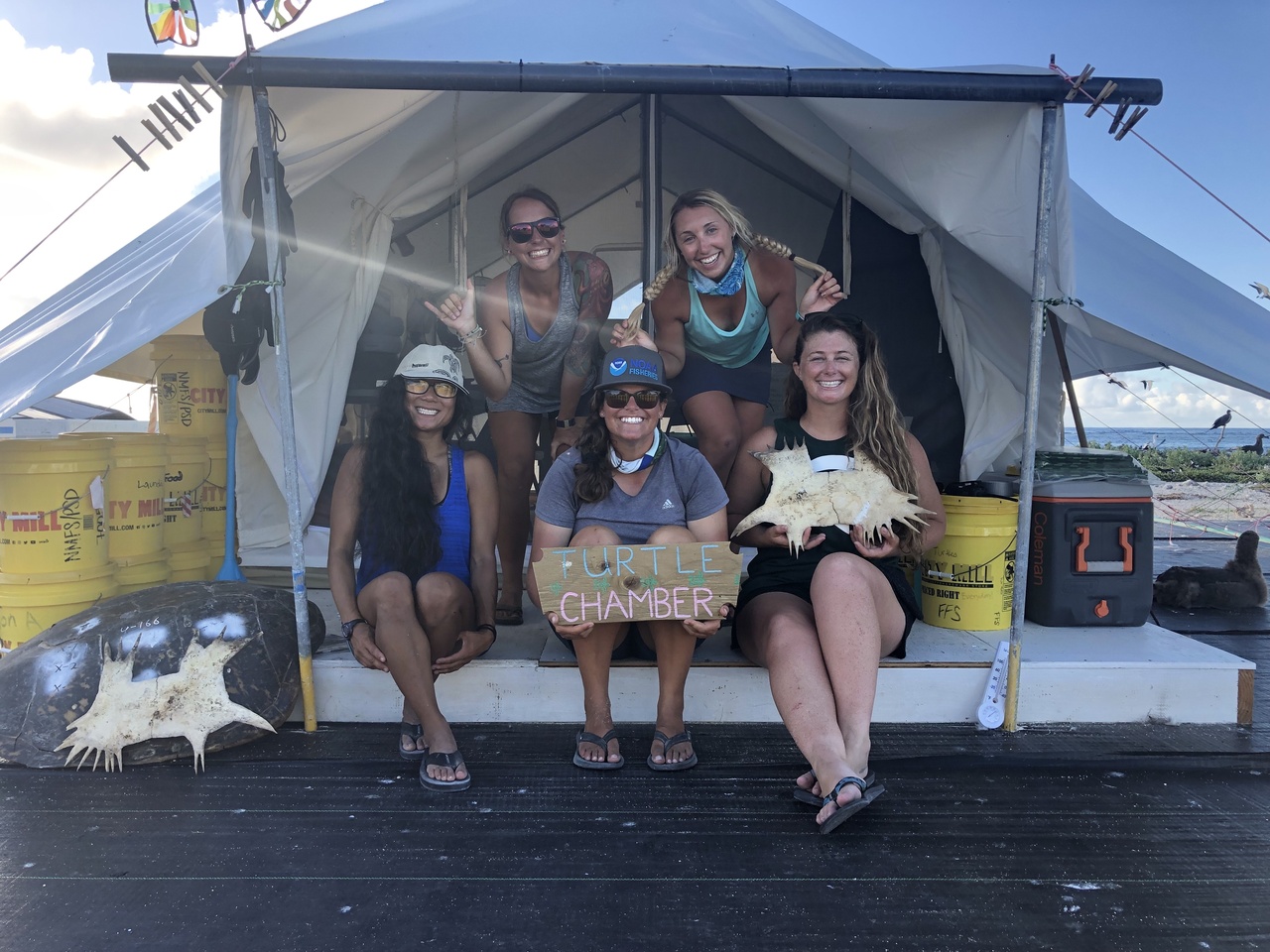 NOAA’s Marine Turtle Biology and Assessment Program typically waits to encounter nesting turtles during the field season in the Northwestern Hawaiian Islands, but this year, they wanted to track a female's migration from the main Hawaiian Islands up to French Frigate Shoals. They wanted to see if they could document how turtles respond to the loss of East Island, their main nesting island in the Hawaiian Archipelago, after Hurricane Walaka hit French Frigate Shoals last October.

In March, the turtle researchers used an ultrasound machine to find a fertile female among the green sea turtles basking on O‘ahu’s North Shore. They attached a satellite transmitter and etched “OA48” on her shell, nicknamed her "Motherload," and monitored her migration north from O‘ahu into the monument. The field team prepared for the field season even more eager than usual — ready to follow Motherload up to her nesting habitat in French Frigate Shoals.

After arriving at French Frigate Shoals in mid-May, the team used small motorboats to patrol the atoll's ten islets, hoping to catch a glimpse of Motherload. Finally, on May 24th, Motherload found them! She approached the team and swam directly under their boat as they were floating off Trig Island. They could see that she and her satellite tag were in good shape. A few days later, Motherload was observed again, basking (resting) among a pile of turtles on Trig Island. 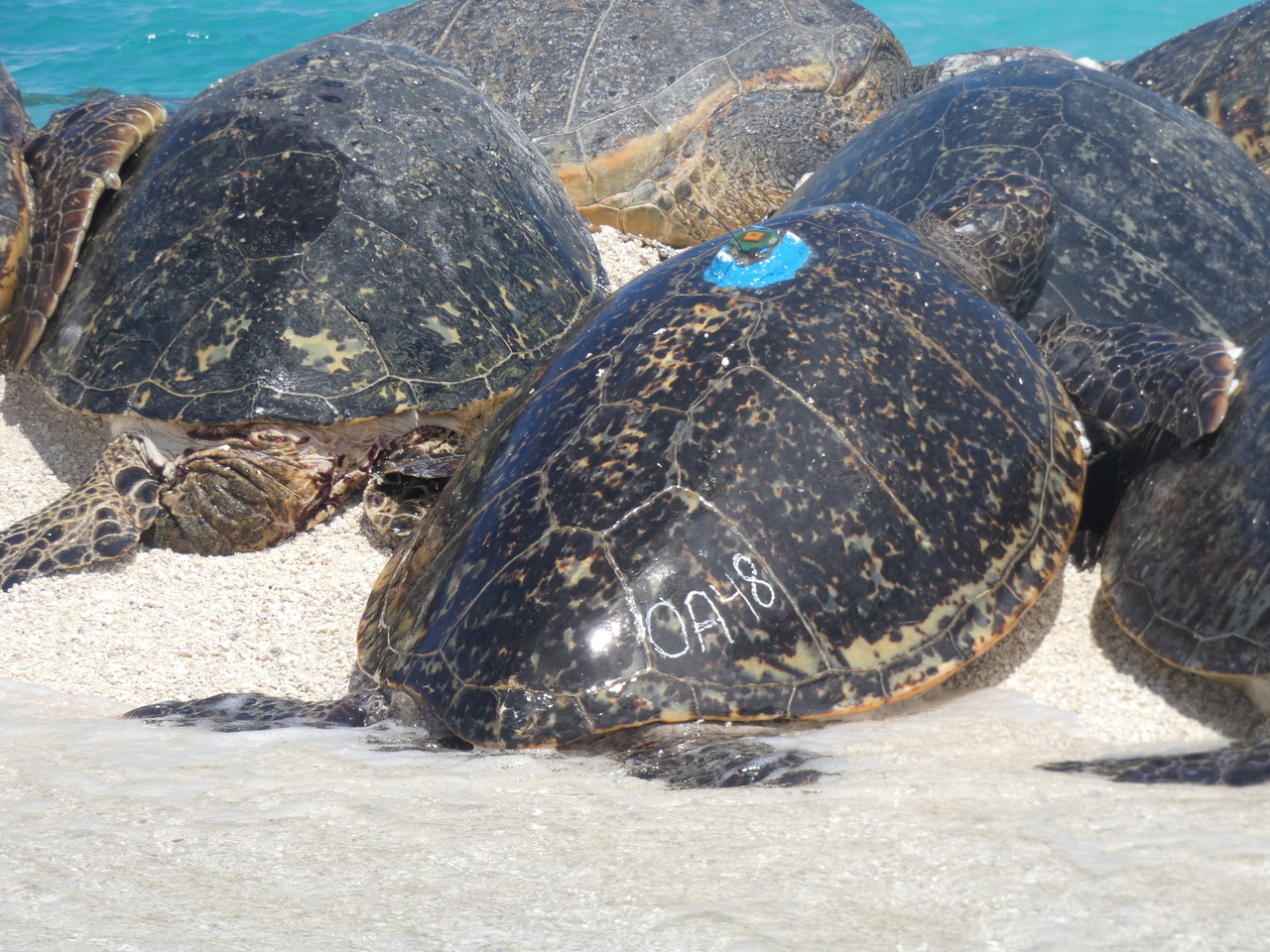 Motherload (OA48) was sighted basking on Trig Island, French Frigate Shoals in the Northwestern Hawaiian Islands about two months after researchers attached a satellite transmitter to her shell on the North Shore of O‘ahu. Photo: NOAA Fisheries/Lindsey Bull

But the real treat came the next night at 10 p.m., when researchers patrolling the beaches of Tern Island saw her digging a nest chamber. There, she laid 85 eggs. The team placed a tiny temperature-logging device among her eggs so they could monitor the nest and record if this clutch was successful.

Because sea turtles lay multiple nests per season, turtle researchers will spend the next 3 months monitoring each clutch Motherload lays. They will also track her movements around the atoll until she returns home to the North Shore of O‘ahu. On June 12, Motherload was spotted at Tern laying eggs again. Christina was able to count the number of eggs and deploy a temperature data logger in the nest. 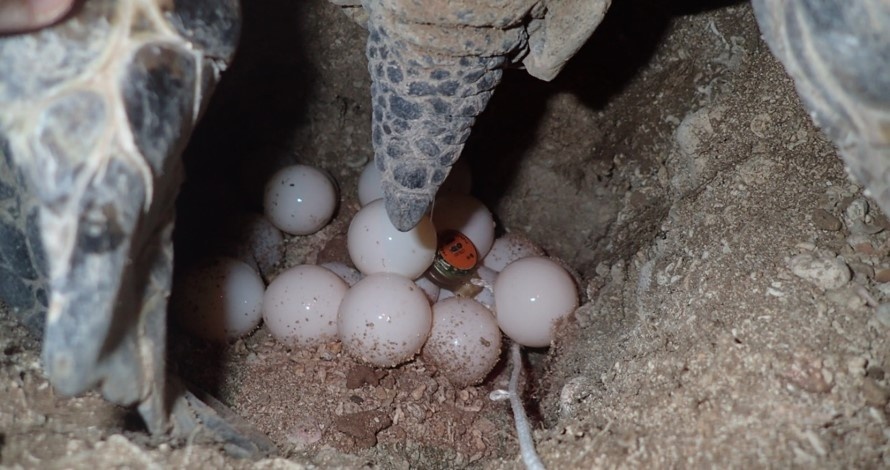 Motherload deposits a clutch of eggs and scientists add a tiny data logger to monitor the nest temperature throughout incubation. These data will allow scientists to predict the sex ratio of hatchlings produced based on the temperatures recorded during the second trimester of incubation. Photo: NOAA Fisheries/Marylou Staman

NOAA's researchers were encouraged to see her nesting on Tern Island, but are still concerned about the loss of nesting habitat for turtles at French Frigate Shoals. Trig Island, for example, was historically an ecologically important islet for both green sea turtles and Hawaiian monk seals, but was completely washed away in 2018 and now barely breaks the surface at low tide. 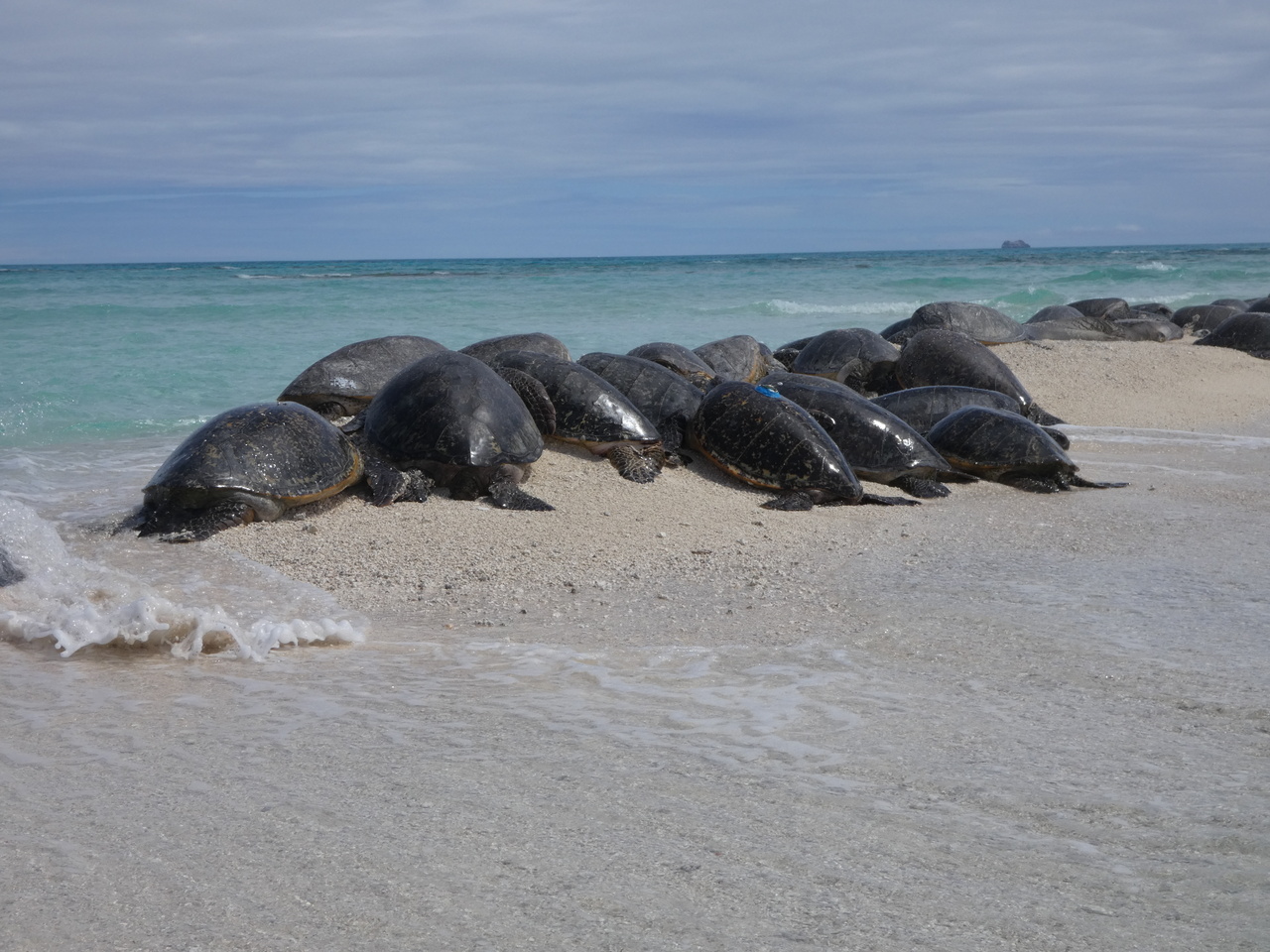 Motherload (center, with a blue satellite tag on her shell) huddled up with about 40 other adult turtles, basking on the remnants of Trig Island. Trig was once one of the main nesting beaches for Hawai'i’s green sea turtles. Now, waves lap at their hind flippers, even at low tide. Photo: NOAA Fisheries/Lindsey Bull

By tracking Motherload's movements around Trig Island each day, researchers hope to better understand how sea turtles can acclimate to changes in their environment. This understanding will help us predict how they might adapt in the future to ecosystems drastically altered by climate change.