NOAA and partners have supported communities through restoration at two urban Superfund sites in Massachusetts and Washington. We’re increasing access to parks, and getting locals involved in habitat restoration through training and job opportunities. 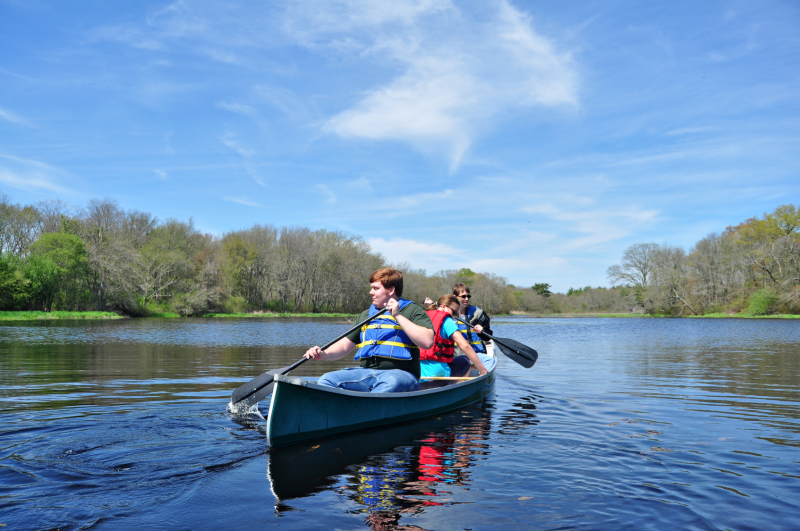 From Los Angeles to Portland, and Boston to Tampa Bay, the U.S. coasts are home to many urban areas. Close to 40 percent of the country’s population live along the coast, and that number is growing. Along with people, urban coastal areas often have both historical and operating industrial infrastructure, such as factories and ports. These industrial features sometimes lead to hazardous materials making their way into waters and soils, as well as fish and wildlife.

When pollution happens in any coastal community, NOAA works with teams of state, tribal, and federal agencies, called Trustees. Together, we assess the impacted resources and services. Then we work with responsible parties to secure funding to restore them. This work is backed by more than 30 years of science and collaboration.

Often, the “services” provided by our natural resources—like recreational fishing, boating, and going to the beach, or storm protection and clean water—are impacted by pollution. These natural resource services have economic value, and part of our work focuses on restoring them. Examples include building parks and piers, or improving infrastructure for cleaner water.

We also work with impacted communities to restore the environment. Through the power of state, regional, and local partnerships, we leverage our knowledge, resources, and funding to reach more effective solutions together. These partnerships can include working with conservation corps that combine habitat restoration with job creation and employ people from the communities impacted by pollution.

More than 100 of these natural resource damage cases across the United States are in various phases of assessment or restoration. Here, we highlight two cases in urban areas that have seen strong environmental and community restoration results.

New Bedford Harbor is a major commercial fishing port and industrial center in southeastern Massachusetts on Buzzards Bay. From the 1940s to the 1970s, manufacturers discharged wastes containing highly toxic chemicals and metals into the harbor and bay. The toxins contaminated hundreds of acres of sediment at the bottom of the harbor. In fact, one location contained the highest concentrations of PCBs ever documented in a marine environment. These industrial chemicals cause developmental and neurological problems in babies and children, and accumulate easily in fish and shellfish.

NOAA and partner agencies on the New Bedford Harbor Trustee Council include the U.S. Fish & Wildlife Service and Massachusetts Executive Office of Energy and Environmental Affairs. We are using $20.4 million of restoration settlement funds to restore natural resources and services impacted by the contamination. Since 1998, the Council has implemented 37 projects restoring fish passage and habitats, preserving land, and restoring public access and recreational opportunities.

New Parks For People to Access to Waterfronts, Recreation

The Council has funded the construction of portions of two recreational parks in the City of New Bedford:

Another $1.2 million in settlement funds were awarded to the Buzzards Bay Coalition to develop the Acushnet Sawmill Park, called The Sawmill. Finished in 2015, the park was a 19-acre former industrial lumber yard on the Acushnet River. The Coalition worked with contractors, the City of New Bedford, and hundreds of community volunteers to restore the area. They removed acres of pavement and buildings, restored natural river banks, replanted wetlands and wildflower meadows, and built nature trails and scenic overlooks along the river. The public park protects the river’s health and offers local residents a beautiful place to explore the outdoors.

Industrialization of Commencement Bay in the early 1900s led to filling in a vast area of tidal habitats. It also led to dredging and widening the meandering streams and rivers that flowed into the bay for maritime traffic. Beginning in the 1920s, hazardous substances from various industries, including shipbuilding, oil refining, and chemical manufacturing plants, were released into the waterways.

Since 1991, under NOAA’s leadership,the Commencement Bay Trustees have negotiated 19 settlements with those responsible for the pollution. They've recovered more than $70 million in funds, services, and properties to support restoration projects.

Along with direct restoration, the Trustees created the Commencement Bay Stewardship Collaborative with a $4.9 million stewardship fund. They partnered with the nonprofit organization EarthCorps to monitor and maintain Commencement Bay’s restoration sites in perpetuity.

EarthCorps has expertise in science and stewardship, and deep roots in the communities in and around the urban waterways of Puget Sound. Like other NOAA conservation corps partnerships, they offer local youth job and training opportunities helping restore habitats. EarthCorps alumni have gone on to work in a wide range of organizations in Washington and other states, and internationally.

In addition to job training, EarthCorps members learn how their work addresses environmental injustice and helps ensure a more resilient and climate-adapted bay. Its variety of habitats all contribute to a connected watershed for migrating salmon. These areas also serve as important resources for local communities, including:

EarthCorps also leads events with local community volunteers and school groups to get some of their work done. For example, they partner with other local environmental nonprofits to remove invasive plant species to restore natural site conditions. This leads to a deeper awareness, pride, and sense of ownership among local community members, which is critical to long-term restoration project success. Caring for these precious lands and waters in such a tangible way encourages a stewardship ethic among participants that lasts long after the work is done.

About $1.5 million of the initial $4.9 million stewardship fund has been spent to date. Supported by the Trustees, EarthCorps is managing stewardship dollars by:

New Bedford Harbor and Commencement Bay are just two examples of NOAA’s Damage Assessment, Remediation and Restoration Program success. The collaborative program has worked to hold polluters accountable for the impacts of oil spills, hazardous waste, and ship groundings in waterways for 30 years. Over that time, NOAA and co-trustees have recovered over $652 million for restoration from 156 Superfund sites like these, with more under assessment. 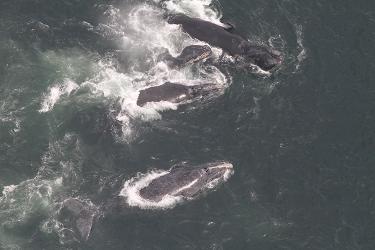 Four North Atlantic right whales socialize in what is known as a surface active group, or SAG, in the Gulf of St. Lawrence. Credit: NOAA Fisheries/Alison Ogilvie
Feature Story

Get Crafty With Our 2021 Woods Hole Science Aquarium Snowflake Templates! 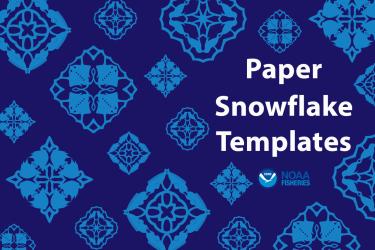 Last updated by Office of Habitat Conservation on November 17, 2021