Winding side channels and other habitat improvements can help recover salmon, making them less vulnerable to flooding or other extreme conditions associated with climate change. 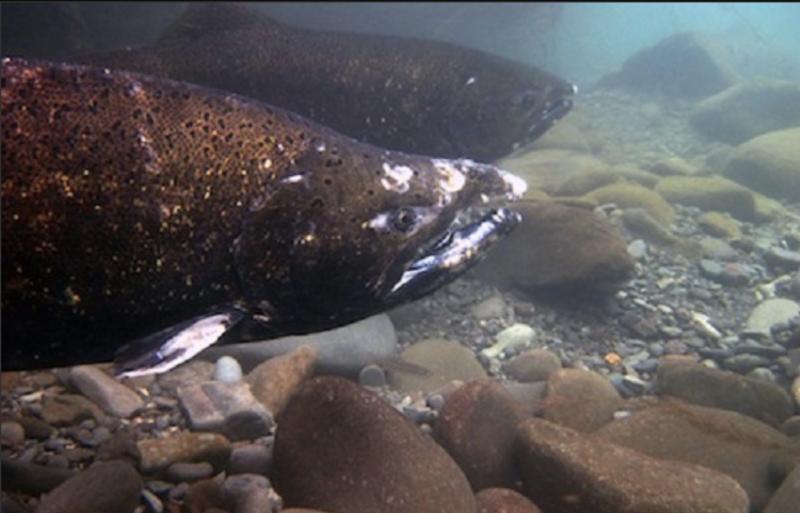 Teasing apart the elements of Puget Sound rivers that matter most to fish, researchers have found that one of the best ways to recover threatened Chinook salmon may be to restore the winding side channels that once gave young fish essential rearing habitat and refuge from high winter flows.

Models were based on fine-scale river mapping and tracking salmon populations across Puget Sound. They showed that habitat restoration projects in the Cedar River southeast of Seattle could boost the number of young Chinook salmon produced by each spawning adult by adding side channel habitat.

Additional side channels and other habitat improvements also appear to help stabilize salmon numbers, making them less vulnerable to flooding or other extreme conditions that may come more often with climate change.

“The risk of those extreme catastrophes is lessened because the water can spread out and slow down, with less impact to the fish,” said Correigh Greene, a research biologist at NOAA Fisheries’ Northwest Fisheries Science Center in Seattle and coauthor of the new research published last week in PLOS ONE. The team of scientists from NOAA Fisheries, Cramer Fish Sciences, and the Washington Department of Fish and Wildlife used aerial photographs to chart and measure each twist and turn of 10 of Puget Sound’s largest rivers, from the Skagit to the Dungeness, and relate them to Chinook salmon populations.

“We now know that there is a detectable response to habitat restoration that can inform our decisions about how to pursue recovery and dedicate funding where it will do the most good for fish,” said Elizabeth Babcock, Northern Puget Sound Branch Chief in NOAA Fisheries’ West Coast Region, who helps carry out recovery plans for threatened Puget Sound Chinook salmon.

Biologists view the braided networks of side channels that are common in natural rivers in the Northwest as evidence of a river’s “complexity,” which also includes deep pools, outcrops, and log jams, all of which provide important habitat for juvenile and adult fish. Generally, the more complexity a river displays, the better habitat it will provide for fish, because they can more easily find refuge and rearing habitat when they need it.

Many Puget Sound rivers have suffered reduced complexity through years of development as dikes, roads, and riprap have hemmed them into straight, narrow channels with far less room. That leaves less refuge for juvenile fish to grow before migrating into the Salish Sea.

Of all the factors that contribute to a river’s complexity, the researchers found that side channels and the number of junctions among them, and to a lesser extent woody material such as log jams, are most important to Chinook salmon. More complex rivers are generally slower than narrow rivers with impervious banks, so the juvenile salmon aren't swept downstream faster than they're ready to go. The more habitat complexity, the researchers found, the higher the productivity of Chinook salmon populations.

“Once we link habitat metrics to meaningful productivity metrics, we can start to answer some of the big questions, such as, “How much restoration achieves recovery, and what qualities do you most want to focus on,” said Jason Hall, a senior scientist at Cramer Fish Sciences and lead author of the new study. He noted that the answers may differ from species to species and river to river. Habitat complexity also appeared to reduce fluctuations in salmon numbers from year to year, “supporting the idea that habitat complexity buffers populations from annual variation in environmental conditions,” the scientists wrote.

Habitat protection and restoration along the Cedar River, which provides much of Seattle’s municipal water, is an example of the kind of restoration that can help recover Puget Sound Chinook salmon in the long run, Greene said. Understanding the habitat qualities most important to fish helps estimate “how much we have to do to move the needle over the whole life cycle.” The same mapping and modeling approach that was demonstrated by the research can help plan and track the benefits of other restoration occurring in estuaries and along Puget Sound’s shorelines, the authors said.

“If you have funding for restoration, where can you spend it to deliver the best benefit for fish?” Babcock asked. “We’re finally starting to have better answers to that question.”