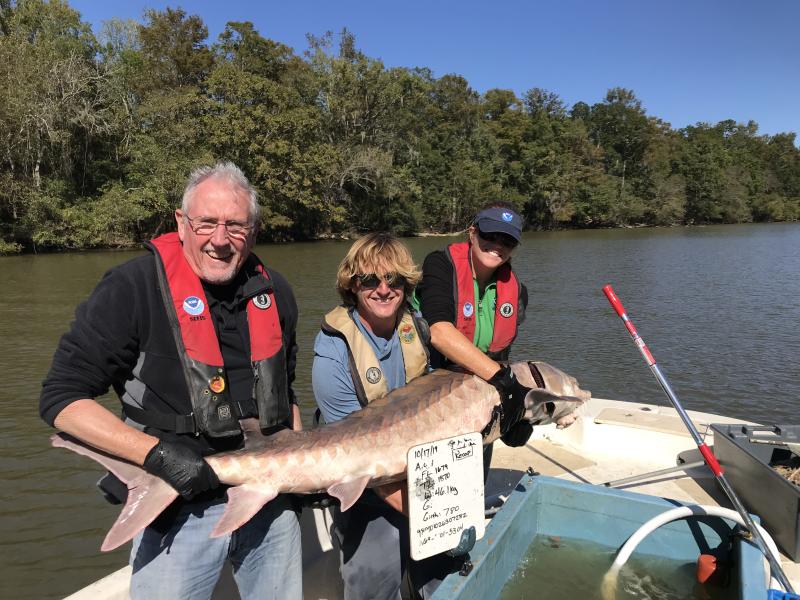 Atlantic sturgeon were once abundant in rivers and coastal waters along the East Coast, but their population has declined greatly due to fishing and habitat loss. Recent tracking of sturgeon in the Pee Dee River, however, is signaling an improvement in the health of the population.

The Pee Dee River runs approximately 430 miles from Virginia, through North Carolina, and ends at Winyah Bay in South Carolina. The river supports commercial fisheries and provides important spawning habitat for sturgeon and other fish that migrate up the river each year.

Since 2010, a team of researchers has been monitoring the seasonal occurrence of fish in the river. Using acoustic tracking technologies, where transmitters are attached to fish and receivers are placed in rivers, they can track the movement and numbers of migratory fish. The researchers are from NOAA Fisheries and the South Carolina Department of Natural Resources.

In September 2019, researchers captured a female Atlantic sturgeon while swimming upstream. The team recorded the length and weight measurements, and tagged the fish with an acoustic transmitter. By tracking the acoustic signal, the team was able to locate and recapture the fish while swimming downstream, about a month later, in October 2019.

Upon recapture, the fish was found to have lost about 6.5 pounds, suggesting she laid her eggs in the spawning habitat upstream. The observed return of a female Atlantic sturgeon to spawn in the Pee Dee River suggests an improvement in the health of the population.

Listed as a critical habitat for sturgeon in 2017, the Pee Dee River is essential to the recovery of the species. The presence of a spawning female also indicates the river’s conditions (like temperature, salinity, and dissolved oxygen) are suitable for spawning. It also suggests that there is healthy habitat to support reproduction.

With a better understanding of when, where, and why a species is present in a particular area, we can gain important insights into the health of the population and the habitats that support it. NOAA Fisheries is dedicated to conserving and rebuilding Atlantic sturgeon populations along the East Coast. Working closely with our partners, we will continue to conduct research, and develop management plans that preserve and restore sturgeon habitat, and promote population recovery. 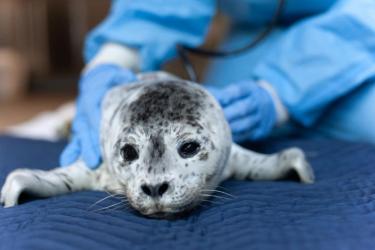 Luis visiting the CNN studio in Atlanta for an interview while in a previous position. Photo courtesy of Luis Noguerol.
More News

Last updated by Office of Habitat Conservation on October 20, 2020