Returning Rescued Sea Turtles to the Wild By Land, Air, and Sea

Learn about the operations that go into rescuing, rehabilitating, and releasing protected sea turtles. 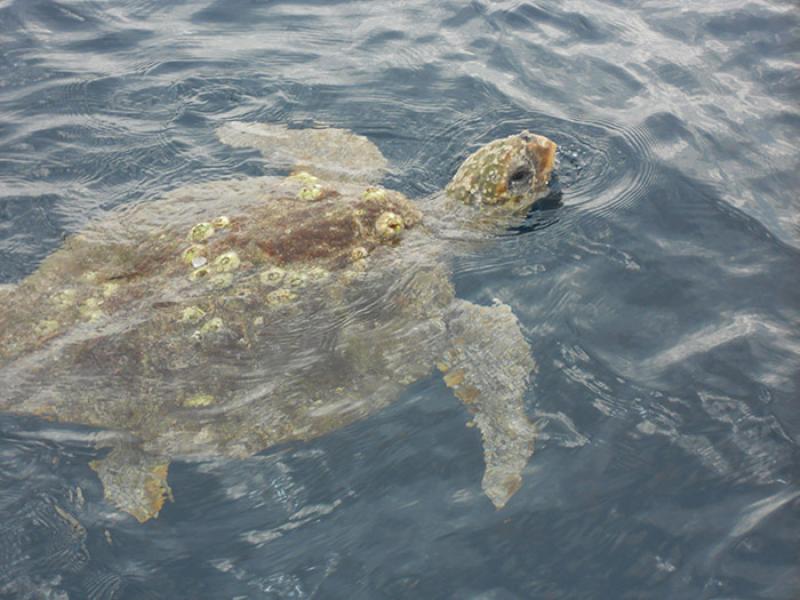 We work with organizations along the Atlantic coast to help rescue and rehabilitate protected animals such as sea turtles. A successful rescue takes months of work and coordination between many partners. We make sure the turtles are properly cared for, returned to health, and then released back into the wild.

Four species of sea turtles are commonly found in the waters off New England and the Mid-Atlantic:

They’re often seen in the spring and summer months as they feed on jellies, eelgrass, small fish, squid, or crabs. All the sea turtle species in our region are listed and protected under the Endangered Species Act. Sea turtles face many human threats including entanglement in fishing gear, ingestion of marine trash, or being hit by boats. However, sometimes natural phenomena also result in these turtles needing extra help.

As the cooler months approach and water temperatures drop, we often see an increase in sea turtle strandings (i.e. sea turtles washing up on beaches). Sea turtles are cold-blooded reptiles. If water temperatures drop too drastically, they can become “cold-stunned” and enter into a hypothermic state, causing them to wash ashore. Without intervention, many more of these animals would perish. However, thanks to an extensive network of beachcombers working with authorized stranding partner organizations, many of these turtles are rescued each year. 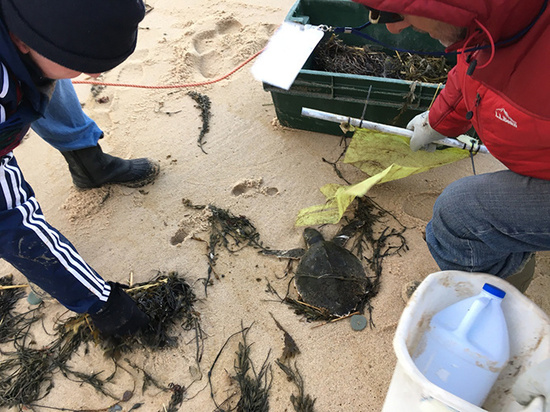 Learn more about past rescue events

During the winter of 2019, 271 live cold-stunned sea turtles were recovered from New England and Mid-Atlantic beaches. Finding rehabilitation triage space for all of these animals can be a challenge. They’re safely packed into volunteer cars, vans,and even airplanes (thanks to a unique volunteer pilot program called Turtles Fly Too). The sea turtles can be transported great distances quickly to rehabilitation centers where staff can monitor and provide proper veterinary care. After the turtles recuperate in temporary homes, recovered turtles must then be transported to safe coastal locations for release.

After almost 6 months of rehabilitation, 13 sea turtles were healthy enough to be released back into the wild. To coordinate a successful release six organizations between Massachusetts and Georgia had to be organized. “Our stranding response and rehabilitation partners all work towards the same goal— saving as many sea turtles as possible. They collaborate with each other, NOAA, Turtles Fly Too, and others to accomplish this goal,” Kate Sampson, NOAA Fisheries Greater Atlantic Sea Turtle Stranding Response Coordinator. Three Kemp's ridley sea turtles traveled from the National Marine Life Center’s rehabilitation facility in Massachusetts to New York by plane. In New York, they were joined by eight more turtles from the New York Marine Rescue Center and flown to Jekyll Island, Georgia where they were ultimately released. The trip covered a total of 1,160 miles.

All these efforts take good communication from everyone.

Around the same time, two turtles that had been rehabilitated by the Virginia Aquarium and Marine Science Center were also ready for release. The U.S. Coast Guard transported these two turtles 5 miles offshore to ensure a successful release.

These are just two of many examples of the hard work and collaboration that go into rescuing, rehabilitating, and releasing these protected species. These rescues require the help of volunteers scanning beaches during cold winter months and knowledgeable veterinary staff working tirelessly at authorized organizations. We also need dedicated volunteers and pilots transporting sick and recovered animals, and NOAA staff who facilitate communication and collaboration between all the moving parts. Without all their efforts, hundreds of sea turtles would be lost each year.

What You Can Do to Help Sea Turtles

There are actions you can take from the comfort of your own home or boat that can help protect sea turtles and other marine animals. Here are some tips on how your choices can make can make a difference :