Right Whale Conservation: Get the Facts from Our Ship Strike Experts

North Atlantic right whales are approaching extinction, and vessel strikes, also known as ship strikes, are a leading cause of their declining population. Explore the strategies and challenges of reducing these dangerous collisions in this Q&A. 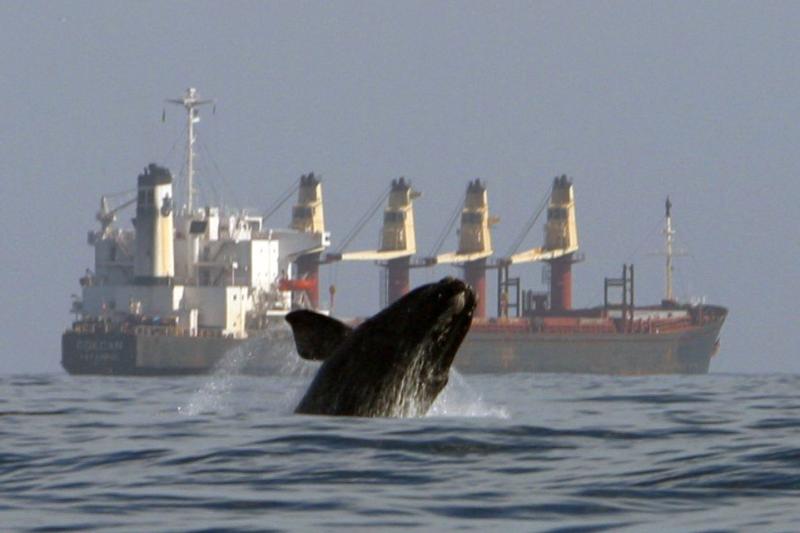 Editor's Note December 17, 2021: Since this interview was conducted in 2018, the estimated number of North Atlantic right whales has dropped from an estimated 450 individuals to fewer than 350, based on the latest preliminary estimate. 10 percent of newborn right whale calves were killed or seriously injured by vessel strikes in the past two years.

The North Atlantic right whale faces a number of threats from human activities, including collisions with ships.

NOAA established a ship strike reduction rule in 2008 to mitigate the impact of vessel strikes on this vulnerable coastal species. The rule requires that mariners slow their speed in management areas where right whale habitat overlaps with major shipping lanes. Since its inception, the rule has reduced collisions with right whales, but collisions are still a leading cause of elevated North Atlantic right whale injuries and deaths.

Bettridge and Kelliher work with NOAA’s marine mammal survey team and shipping data analysts to review right whale locations and understand where co-occurrence with ships is most prevalent. Knowing where the whales are located from year to year, and even day to day, is especially important when establishing protective management areas.

In 2011, the North Atlantic right whale population was growing and there was hope that protections provided by the ship strike reduction rule would further increase their numbers. It seems that trend has reversed. Do you think the rule has been effective?

SB: You’re right, the North Atlantic right whale population has been declining. Last year’s high rate of right whale mortalities, following a few years of low birth rates, is not sustainable.  However, studies suggest that the ship speed rule in the United States has had positive effects; there have been fewer lethal ship strikes since the ship speed rule was put in place. But mortalities caused by ship strikes still occur. And, with a declining population, every death matters.

Why are ship strikes such a problem for right whales?

PK: The challenge with right whales is that they are a coastal species that inhabits areas of high vessel traffic and fishing activities. We have a high volume of large ships utilizing the major ports (e.g., Massachusetts, New York, New Jersey, Jacksonville) when right whales are either feeding, migrating, or calving. With the whales traveling north to south and ships traveling east to west, their paths cross. As large as right whales are, vessels are larger, and the faster a vessel is going when it hits a whale, the higher the probability of serious injury or death.

What are the challenges NOAA faces in further reducing right whale and vessel interactions?

PK: We have looked at, and implemented, various options to reduce the number and lethality of vessel strikes, including slowing vessels and moving shipping lanes. For example, in 2009 we narrowed and moved the traffic lane that goes into Boston a few degrees north based on observations of right whale movement, and that helped reduce vessels’ interactions with whales. Modification of a traffic lane is a major international undertaking, and this change required significant collaboration among our partners in the U.S. Coast Guard, the International Maritime Organization, and the commercial shipping industry.

Can we do more? There’s always more to do, but first we have to identify measures that have a good chance of successfully reducing the effects of vessels on whales. We have not seen another “hot spot” for vessel strikes in U.S. waters, so we haven’t identified the need to move any other traffic lanes at this time. The only right whale vessel strike observed last year in the United States was a year-old calf that was hit and killed near Cape Cod.

SB: One of our new challenges is that right whales appear to be moving to different areas, likely in response to shifting food resources. This has put them in places where conservation measures, such as reduced vessel speeds, are not yet in place. For example, 12 of the 17 right whale mortalities that occurred last year were in the Gulf of St. Lawrence, which is under the jurisdiction of Canada, and there were no ship strike or bycatch reduction measures in place at the time. Of the seven carcasses that were examined, five had evidence of blunt force trauma, which is indicative of a vessel strike.

Could technology like acoustic “pingers,” which have been used to alert harbor porpoises to fishing nets, alert whales to the presence of vessels and help prevent ship strikes?

PK: Since North Atlantic right whales rely on sound for underwater communication, the additional noise produced by a pinger or similar technology might be a negative rather than a positive. When researchers have tried to use noise to alert baleen whales, like right whales, or to herd them toward safer waters, they haven’t had much success.

SB: We had a workshop to look at technologies such as alarms, radar, and LiDAR to detect and alert whales to nearby ships, but there is no silver bullet. Some studies have shown that North Atlantic right whales either don’t get out of the way, or they respond to alerts by swimming to the surface, which likely increases the risk of collisions with ships.

How does NOAA monitor vessel interactions with right whales, and how does it help you better understand vessels’ impact on the overall population?

SB: NOAA used data on North Atlantic right whale movements collected over the past 25 years to establish seasonal speed restriction zones all along the coast. Ships more than 65 feet in length are required to slow down in those zones at certain times of year, and we monitor vessel activity in the seasonal management areas to enforce compliance.

Our analysts assess vessel traffic data, or Automatic Identification System data, to determine when ships have exceeded speed restrictions in management areas. NOAA Fisheries’ Office of Law Enforcement then issues citations to offenders. Violations of the ship strike reduction rule can result in a civil penalty up to $11,000 as well as criminal penalties up to $100,000, imprisonment of up to a year or both, depending on the frequency and severity of the violations. NOAA Fisheries also provides violation reports to shipping companies as a courtesy to make them aware of speeding ships, and they have been receptive to that outreach effort.

Our main goal is to separate shipping lanes from known right whale aggregation areas and reduce vessel speed in those areas to reduce fatal injuries.