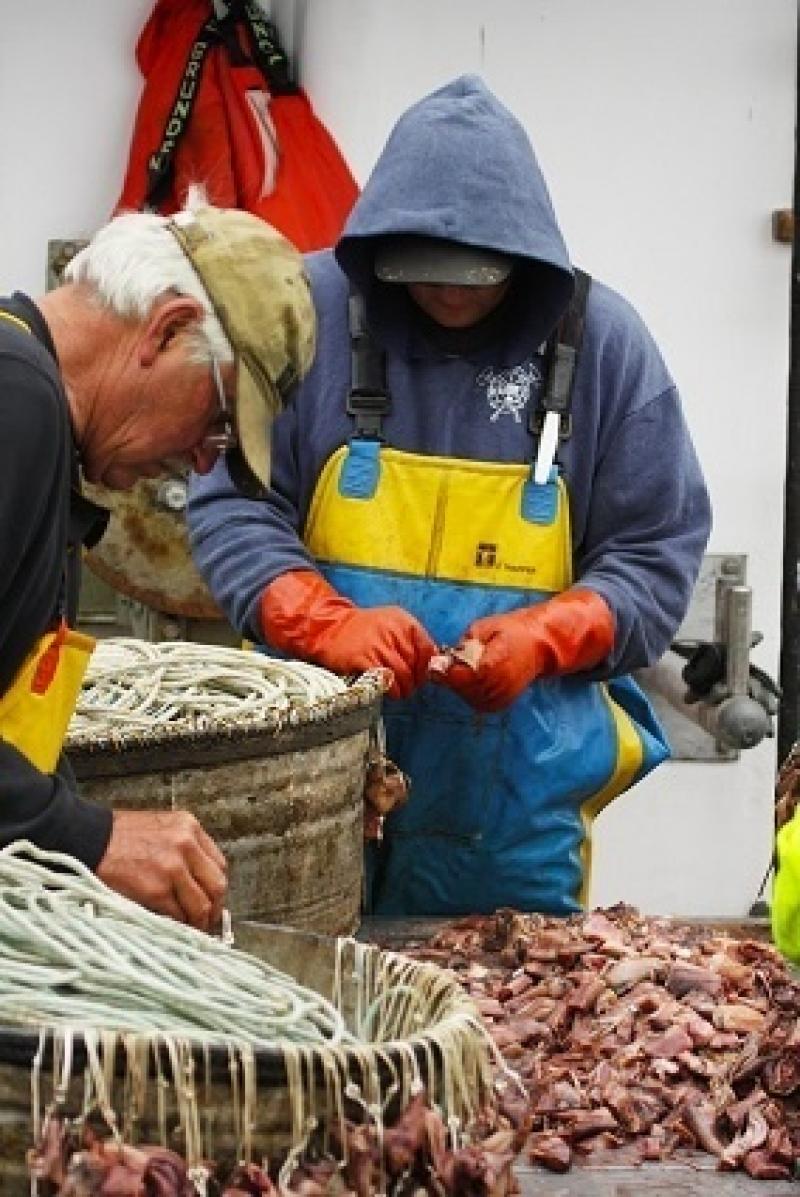 Using 15 years of NOAA’s Fisheries Observer Program data, Center scientists Tom Good and Jason Jannot worked with longline fishermen and vessel captains to study methods of reducing impacts to albatross and other seabirds in the U.S. West Coast sablefish fishery. Results of their research have been published in Fisheries Research.

A commercial fishing longline can be miles long and carry thousands of hooks. In addition to catching targeted species of fish, longlines ensnare other unintended species, known as bycatch. This can include sea turtles, marine mammals, and even birds.

Among the latter are several species of albatross—large, gull-like birds that spend up to 90% of their lives soaring above the Pacific Ocean. These endangered birds are particularly at risk of becoming bycatch.

“As a group, they’re the most endangered seabirds,” said Tom Good, a fisheries biologist and seabird expert at the Northwest Fisheries Science Center. “And bycatch is one of the top factors.”

He and a team of researchers, including scientists from Oregon State University, Oregon Sea Grant, and the U.S. Fish and Wildlife Service, have been working with commercial fishermen to find methods of reducing seabird bycatch along the West Coast, where fishermen attach floats to longlines as a way of better targeting certain species of fish, particularly sablefish.

One such method scares birds away with streamer lines—essentially a set of ribbons or tubes that flap in the wind, frightening the birds so they stay safely back from the hooks. One of Good’s colleagues, Ed Melvin, worked with fishing fleets in Alaska to develop these lines for commercial use, and they were a great success. “It was really a huge problem in Alaska,” said Good, “and then it became almost a non-issue in the fisheries that adopted these lines.”

“As the study showed, it takes longer for these floated lines to sink out of reach of the birds,” Good explained. “The line pays out longer behind the boat before sinking, past the point where the streamers are effective.”

In 2014, NOAA Fisheries recommended that streamer lines be required in West Coast fisheries. The public was invited to comment, and some fishermen wondered why streamer lines should be mandatory when the same effect could be achieved simply by fishing at night.

Jason Jannot works with the Fisheries Observation Science Program at NWFSC as a research analyst. As he put it, “This was really a comment from the fishermen. When they realized that this rule might come through, they said, ‘Hey, wait a minute, I fish at night and I don’t catch any birds.’ So then the West Coast Region came to us and said, ‘Ok, can you guys check on this? Can you find out whether there are birds being caught at night?’”

Together, Jannot and Good looked through over a decade of data collected as part of the Observation Program. “The part that Jason and I were mostly involved with was mining the observer database that’s been amassed since 2002,” Good said. “So we took all the data to compare all the sets that people had conducted during the day and at night.

“And then we had to figure out what ‘night’ is.”

When a crew begins to fish, it’s called a “set,” and observers make note of the beginning and ending times of each set. “So each set,” Good explained, “is this individual point that had to be figured out: On that date, in that location, when was sunset? And then, when did it qualitatively start getting dark?”

The scientists had realized that they needed to compare data collected from different latitudes at different times of year. (Think of the amount of light outside at 5 pm in Seattle or in San Francisco, or in June versus December.) What ends up being important isn’t just the time of day, but the angle of the sun relative to the horizon.

According to astronomers, there are actually three kinds of twilight before it’s officially “night,” measured in six-degree increments of the sun below the horizon. And this is important when it comes to measuring the effect of fishing after sunset on seabird bycatch.

“What we found was, daytime and civil twilight (the first category) were about the same in terms of bycatch. It dropped off after that—and the next two categories weren’t any different than night,” Good said. Apparently, many seabirds have a bedtime.

So to answer the question posed by the West Coast Region: Albatross bycatch did indeed fall significantly at night—provided “night” was defined as “after civil twilight.”

But What About the Catch?

This was good news, but only half of the answer. As Good realized, “With any kind of bycatch mitigation, people may be happy to try something, but how will it affect their catch? What if catch goes down at night?”

So they returned to the observer data. In addition to recording set time, observers take detailed notes on catch, including species composition and quantity.

“We used the observer data to look at the retained catch during the day and at night—using civil twilight as the cutoff,” Jannot said. “And it turned out that catch was no different. You can get the same economic benefit regardless of whether you’re fishing day or night.” Or, as they wrote in the article they coauthored, “Night setting reduced albatross bycatch by an order of magnitude compared to daytime setting, without reducing target catch.”

The rule requiring streamer lines in the Pacific Coast groundfish fishery was enacted in November 2015, while Good and Jannot’s research was still underway. Although it does not contain an exemption for night setting, it does leave room for the possibility of including one in the future.

With the publication of this research, there is now solid evidence that such an exemption would be effective—given the proper constraints. Saving endangered seabirds without sacrificing profits? That’s good for the birds, good for the fishermen, and good for the West Coast sablefish fishery.