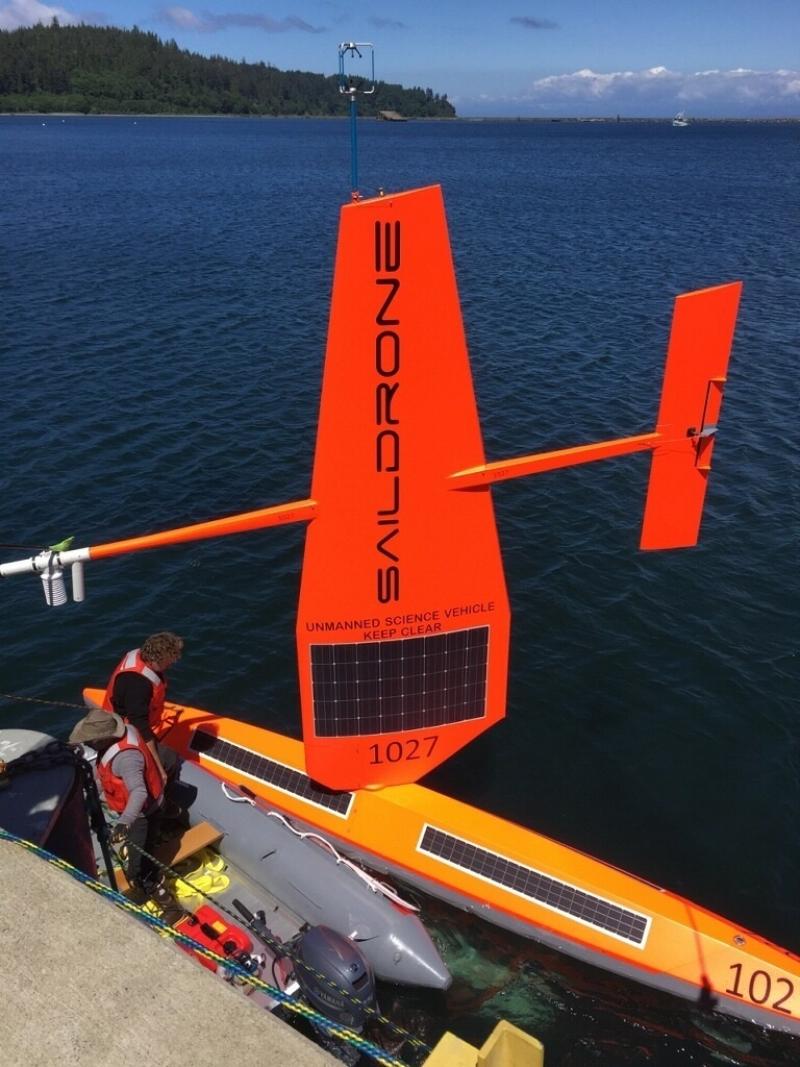 Two autonomous Saildrones launched from Neah Bay, Wash., Tuesday on a summer-long partnership between Saildrone Inc., NOAA Fisheries and Fisheries and Oceans Canada (DFO) to find out whether the wind and solar-powered vehicles can improve the efficiency and accuracy of fisheries surveys off the West Coast.

They will gather acoustic data on Pacific hake (whiting) and pelagic species such as sardines, anchovy and mackerel that make up many of the West Coast’s most important commercial fisheries. Fishermen unloaded 558 million pounds of hake worth about $47 million in ports such as Astoria, Ore., and Westport, Wash., in 2016.

The NOAA ship Reuben Lasker will also follow the transects and gather similar acoustic data for comparison. The Lasker is specially equipped with advanced echosounders for accurately surveying fish populations.

A fifth Saildrone launching from Alameda in August will test its value for conducting focused fisheries surveys, such gathering data in near-shore areas that large NOAA research ships cannot safely reach. The fifth vehicle will focus particularly on historically important areas for fisheries, such as Monterey Bay and off the San Francisco Bay Area.

“This partnership is putting some of the most important new marine technology to work for the West Coast,” said Toby Garfield, Acting Deputy Director of NOAA Fisheries’ Southwest Fisheries Science Center in La Jolla, Calif., and part of the team directing the fifth Saildrone. “The more complete and accurate data we have, the better decisions our fisheries managers can make in real terms of catch levels and seasons.”

The first two Saildrones left Neah Bay about 1 p.m. Tuesday. The vehicles were operating normally, scientists said, but must travel to Canadian waters before they begin collecting data on their transects heading south. The Saildrone team extended its thanks to the Makah Tribe, which authorized the launch from its marina in Neah Bay.

The northernmost surveys are particularly important for hake, a deep-water fish that supports an international fishery that the United States and Canada manage jointly under the Pacific Whiting Treaty. DFO scientists are assisting in management of the mission.

This launch is part of a flotilla of 11 saildrones to deploy to the Arctic and Pacific for earth science missions as part of NOAA's expanding use of the cutting-edge technology to advance fisheries, weather and climate science.