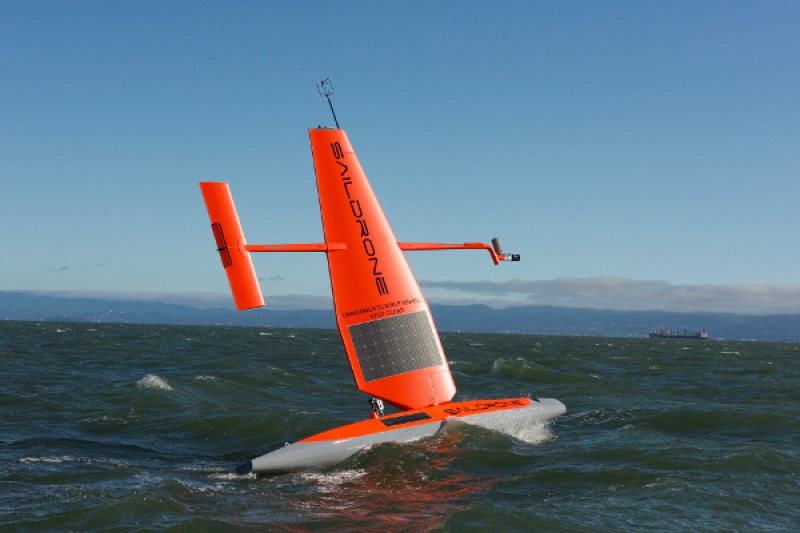 Two saildrones will launch from Neah Bay, Wash., and three will launch from Saildrone’s home base in Alameda in late June. The drones will undertake different missions, all related to improving the efficiency and accuracy of fisheries stock assessments off the West Coast. Stock assessments make estimates of fish populations, which the Pacific Fishery Management Council and NOAA Fisheries use in setting fishing rules and limits for the commercial fishing industry.

Four of the saildrones will duplicate the path of the NOAA Fisheries ship Reuben Lasker as it collects data on populations of sardine, anchovy and other small fishes, to also survey hake, a deep-water species that is one of the West Coast’s most valuable commercial fisheries. Two of these drones will launch from Neah Bay and two from Alameda. Scientists from the Northwest Fisheries Science Center (NWFSC) in Seattle and Fisheries and Oceans Canada (DFO) will work with Saildrone to manage the research. Scientists can adjust the drones’ assignments in real time.

“This a real opportunity for us to test new and likely better ways of collecting data that informs some of our most important decisions on fisheries management,” said Larry Hufnagle, a NWFSC research scientist who will help direct the mission.

A fifth saildrone will explore different approaches to improving the accuracies and efficiencies of future stock assessments. Scientists from the Southwest Fisheries Science Center (SWFSC) in La Jolla, Calif., will help manage the mission with Saildrone. These experiments have four objectives.

The SWFSC conducts stock assessments of small pelagic fishes such as sardines, mackerels, and anchovies.

The saildrones can transmit some data each day, but full details will be downloaded from the vehicles at the end of the mission. The saildrones are designed to remain independently in the field for up to a year, although the four-saildrone mission will run up to 100 days, and the fifth saildrone may be deployed for up to six months. A saildrone typically travels at less than two knots, or a couple miles per hour, while the ship travels at 10 knots, leading to the use of multiple autonomous vehicles to cover the ship’s survey course.

The efforts will answer questions of whether autonomous data collection can improve the effectiveness and efficiency of fisheries management on the West Coast. If the saildrones can add more complete data or make better use of the data collected by ships, they have potential to increase the precision and accuracy of NOAA Fisheries and DFO stock estimates.

Scientists noted, however, that there are tradeoffs between the use of ships and autonomous vehicles in terms of time, and the suite of data that can be collected by each platform.

“We’re fortunate that Saildrone has been flexible enough to figure out ways to test these different ideas about how they might add value to what we do,” said Toby Garfield, Acting Deputy Director of the SWFSC, who is helping direct the mission of the fifth saildrone. “We’re responsible for managing and conserving marine resources, and this all adds to the long-term data that helps us do that effectively.” 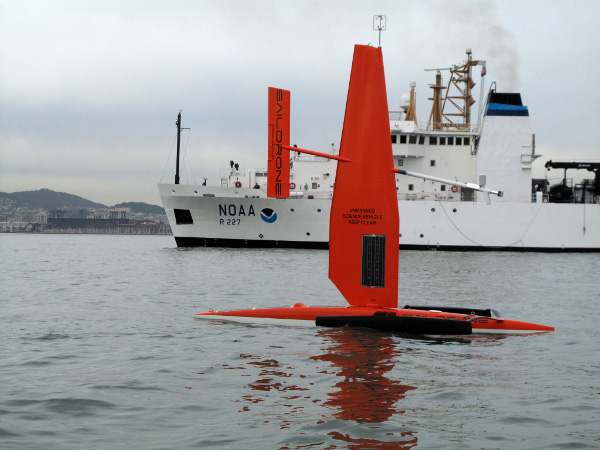 A saildrone cruises next to a NOAA research vessel during earlier trials in Alaska. Courtesy Saildrone Inc.

Watch the West Coast Saildrone Fisheries Mission Video- Thanks to videographer John Gussman of Sequim, Wash., for documenting the launch of the first Saildrones and enjoy his video, shot in part by an aerial drone, describing the ambitions and goals of the mission. The day was perfect for a launch, clear and blue, and the Saildrones are safely on their way to the north end of Vancouver Island, where they will start following transects on their way south toward California.