Ecosystem conditions in the Eastern Bering Sea and Gulf of Alaska are adjusting to a new normal in the aftermath of heatwave conditions, while the Aleutian Islands continue to feel the heat. 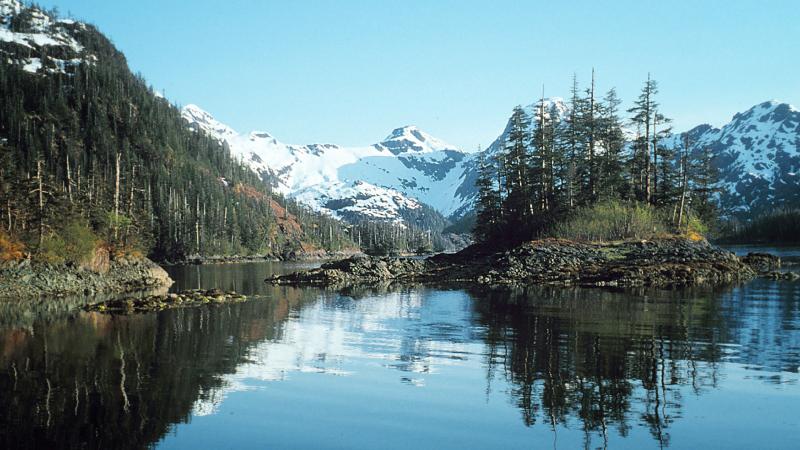 Snow capped mountains reflect off the waters of the Prince William Sound in the Gulf of Alaska. Credit: NOAA Fisheries.

Each year, NOAA Fisheries scientists present data and information, from diverse sources, to resource managers responsible for developing annual fishery management measures for federal fisheries in Alaska. These reports provide critical insight on how environmental conditions are impacting commercial fish, crab and other marine species from plankton to whales in Alaska.

In both the Gulf of Alaska and eastern Bering Sea scientists saw a similar trend—a return to more average temperatures following the warm temperatures experienced in the past several years. However in the Aleutian Islands ocean temperatures remained elevated.

“There was a lot of food for fish like pollock and Pacific cod. The exception was in the western Gulf of Alaska, where zooplankton abundance was down,” said Ferriss.

However, there are lingering effects of the 2014-2016 and 2019 heatwaves. Despite increased food availability, Pacific cod still have not fully recovered from the decline experienced in 2018.

Steller sea lion populations have leveled off or declined in recent years. Humpback whale calf production remains below levels recorded prior to the heatwaves.

“In the Bering Sea, continued concerns over the snow crab and red king crab declines and fisheries closures, as well as subsistence community impacts of reduced salmon runs in western Alaska, were some of the big issues in 2022,” said Elizabeth Siddon, report author and fisheries biologist, Alaska Fisheries Science Center.

“Since the fall of 2021, ocean temperatures and sea ice extent have returned to more average conditions,” added Siddon. “However, sea ice thickness was actually less this year than in 2021 over most of the shelf.”

Ocean productivity was variable over the shelf in 2022. Despite a record large coccolithophore bloom, fish and seabirds appeared to find good food. As a result, fish condition improved from 2021 to 2022 and so did reproductive success for many seabird species.

Scientists believe the coccolithophore blooms are the result of changing wind patterns in the region. Weaker than normal winds failed to mix the water of the Bering Sea, resulting in the growth of coccolithophores instead of other types of phytoplankton. The calcium-rich coccoliths turn the normally dark water a bright, milky aquamarine, making coccolithophore blooms easy to spot in satellite imagery.

In the Aleutian Islands, sea surface temperatures during May–October were the second highest on record. The story for this ecosystem was mixed this year. Abundances increased for fish that feed throughout the water column, such as rockfish, Atka mackerel and sablefish. In contrast, abundance declined for those that feed on the bottom or close to the bottom, such as large flatfish and Pacific cod. Seabirds feeding on fish and/or zooplankton had a productive year.

Paralytic shellfish poisoning remains a concern because toxin levels in samples taken from blue mussels were 3.4 times higher than the legal limit. Ortiz noted that several communities, such as the Qawalangin and Knik tribes, have made a concerted effort to raise awareness to help minimize potential impacts on human health.

There are other longer term changes in the ecosystem. In the 1990s, Atka mackerel and pollock were the most abundant pelagic foraging fish in the Aleutian Islands ecosystem. Now, rockfish are the most abundant. Scientists suggest that rockfish help to provide stability to marine ecosystems because they are a long-lived species that are not as vulnerable to variable environmental conditions. However, with more rockfish in the system, there may be more competition for food with other species feeding on zooplankton. Ortiz notes that reduced body fat in rockfish, Pacific cod and arrowtooth flounder suggests they may be struggling to find enough food.

The Gulf of Alaska was relatively productive in 2022. Scientists and managers determined that existing precautionary measures were sufficient to support sustainable harvests of nine Gulf of Alaska groundfish stocks (including the statewide sablefish stock) in 2023.

We evaluated 16 fish stocks in the eastern Bering Sea and the Aleutian Islands. Only two had increased ecosystem concerns due to sustained unfavorable environmental conditions. However, further precautionary measures were not recommended. These stocks were Aleutian Islands Pacific cod and Atka mackerel.

For eastern Bering Sea walleye pollock, scientists considered several factors when recommending a 36 percent reduction in 2023 catch limits. They looked at the uncertainty of a large incoming year class, as well as juvenile fish expected to reach maturity and support the fishery. Noting environmental conditions that may in fact benefit that year class, further reductions based on ecosystem concerns were not considered necessary.

For the remaining stocks managed in the eastern Bering Sea, including Pacific cod and Yellowfin sole, no ecosystem-related reductions in catch limits were recommended for 2023. Precautionary measures already incorporated into setting catch levels were considered sufficient to address uncertainty about environmental impacts on these fish stocks.