Pacific halibut (Hippoglossus stenolepis) is found in coastal waters throughout the North Pacific and inhabits continental shelf areas (< 150 fm) from Washington to central California along the U.S. West Coast. Pacific halibut has long supported a directed commercial fishery in the U.S. and Canada, but it is also caught as bycatch in fisheries that target species which share habitats with Pacific halibut. The annual Pacific halibut bycatch and mortality report is used by the International Pacific Halibut Commission (IPHC) and the Pacific Fisheries Management Council (PFMC) to manage bycatch in groundfish fisheries and provides estimates bycatch and mortality for each year from 2002-2016.

The U.S. West Coast groundfish fishery is a multi-species fishery that utilizes a variety of gear types. The fishery uses trawl nets, hook-and-line gears, and fish pots to harvest multiple species defined in the Pacific Coast Groundfish Fishery Management Plan (FMP). The groundfish FMP lists over 90 species, including a variety of rockfish, flatfish, roundfish, skates, and sharks, which are found in both state (0-4.8 km) and federal waters (>4.8 km off-shore to the EEZ). Except in very limited cases, Pacific halibut caught by these fisheries is considered bycatch and must be released at-sea when possible. 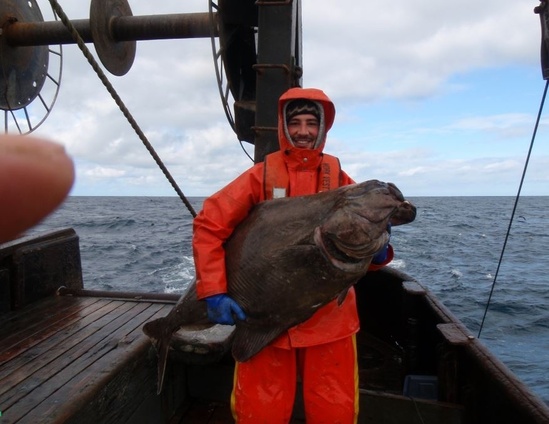 At the September 2017 PFMC Meeting, the IPHC publicly thanked the NWFSC Observer Program for their work on the annual Pacific halibut bycatch report and their responsiveness to data needs. Recognition from the IPHC, the main body responsible for Pacific halibut management, indicates how important this science is for maintaining healthy Pacific halibut stocks on the U.S. West Coast.