Once the sea turtle cold stun season is over, Wellfleet Audubon holds several necropsy sessions where all of the turtle carcasses, sometimes numbering into the hundreds, are examined and sampled. 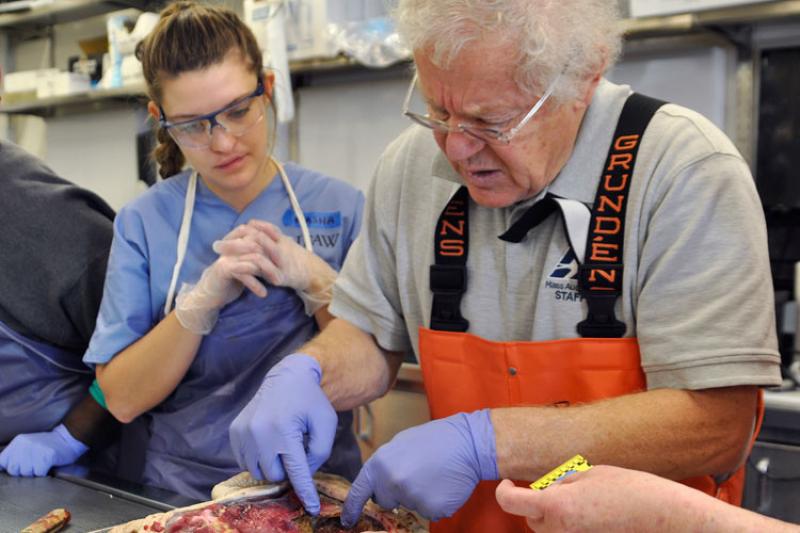 Each fall, when the water temperatures in Cape Cod Bay start to dip, immobilized cold-stunned sea turtles start washing up on Cape Cod beaches. The rescuers at Mass Audubon’s Wellfleet Bay Wildlife Sanctuary (Wellfleet Audubon) in Wellfleet, Massachusetts spring into action, walking the beaches to collect the turtles, and then attending to the dozens of frigid turtles that can be nursed back to health. As the staff triage the incoming patients--checking for heartbeats, eyelid reactions, and other signs of life--they stack the turtles that are definitely dead in a corner.

In the last five years, an average of almost 600 cold-stunned sea turtles stranded in Massachusetts each year. In the fall, these turtles start heading south, but get trapped by the hook-shape of Cape Cod, keeping them stuck in the cooling waters of the north. Wellfleet Audubon responds to every one of those turtles, an effort that involves hundreds of volunteers in the field and at their facility working non-stop through the cold stunning season months of October through early January.

Some turtles don’t beat the cold, but the survivors go on to treatment and rehabilitation at the New England Aquarium. Once healthy, they are driven or flown to beaches south for release back to the ocean, where we hope they live long, happy, and warm lives. 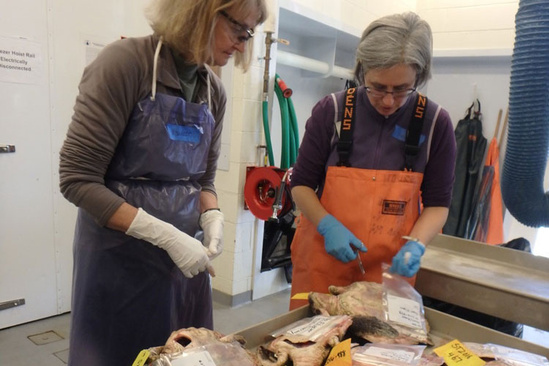 The story isn’t over for the turtles that don’t make it. Dead turtles are salvaged for later necropsy (animal autopsy). Studying these turtles can provide a great deal of valuable information about the species’ biology, habitat use, movement patterns, and more.

All sea turtles are listed under the U.S. Endangered Species Act. In order to recover these species, we must understand how they are using our waters and the threats to their survival. Other than when they nest on shore, these elusive reptiles spend their entire lives at sea, making them a challenge to study.

Once the cold stun season is over, Wellfleet Audubon plans several necropsy sessions where all of the turtle carcasses, sometimes numbering into the hundreds, are examined and sampled. Wellfleet Audubon’s Bob Prescott leads this effort, and invites other researchers to assist with the necropsies at a Woods Hole Oceanographic Institution laboratory. 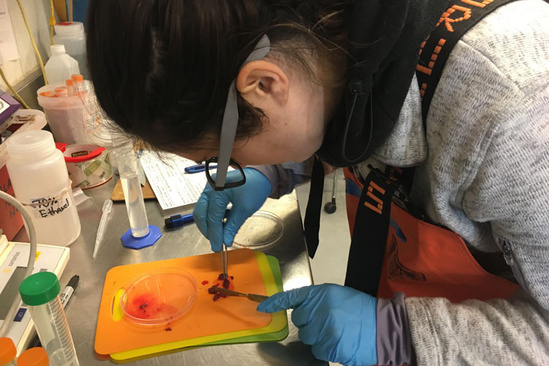 Necropsy sessions involve responders, researchers, veterinarians, biologists, and students. Some collect samples for their own research projects, some collect basic information that will be added to Wellfleet Audubon’s decades of data on cold-stunned sea turtles, and others are there to learn about sea turtle biology and necropsy technique.

Young and not-so-young, inexperienced and expert, staff and volunteers from ten different organizations all work together to get as much information as possible from the sad situation of sea turtles that succumbed to cold stunning.

Samples gathered during these sessions will help the organizations to:

In 2017, these teams necropsied a total of 84 sea turtles. With these new samples, researchers from around the country will contribute to the body of knowledge that exists about these seafaring creatures. Their dedication to saving the animals they can, trying to learn from the ones that couldn’t be saved, all while maintaining a collaborative spirit not dampened by the smell of long-dead reptile, are some of the reasons the stranding network is so successful.