Take a stroll down a sandy stretch of Texas coast and you might see a real-life superhero in action.

No, not Aquaman, but a protector of sea life all the same. Lyndsey Howell is her name and saving sea turtles is her claim to fame. 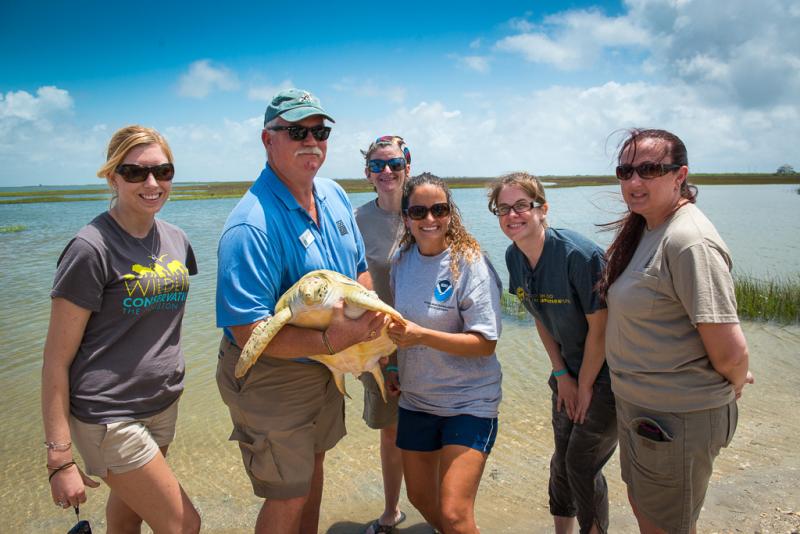 Take a stroll down a sandy stretch of Texas coast and you might see a real-life superhero in action.

No, not Aquaman, but a protector of sea life all the same. Lyndsey Howell is her name and saving sea turtles is her claim to fame.

Challenges of the Job

Howell is a biologist at the NOAA Southeast Fisheries Science Center’s Galveston Sea Turtle Facility and the primary contact for sea turtle stranding cases along the upper Texas coast. She and other scientists at the Galveston facility conduct regular beach surveys, rehabilitate sea turtles rescued from life-threatening situations and respond to new stranding reports phoned in by the public. There’s never a dull moment. Calls for help can come at any time.

“We’re 24/7,” Howell said. “We’ll go out at night to pick up turtles that have swallowed fishing hooks. We’ve had turtles entangled in shoe laces, dragging a shoe. Sometimes they’re entangled in plastic bags and other debris. Even if it’s 2:00 a.m., I’ll get up, get dressed, and go get the turtle. We cover 90 miles of coastline and not every section of coast can be reached by road, so it could take several hours to get to a turtle. Each case is different.”

Whatever the case may be the Sea Turtle Stranding and Salvage Network—led by NOAA Fisheries and made up of federal, state, non-profit, and volunteer organizations from the Atlantic Coast and Gulf of Mexico—is the first to be notified and first to respond.

Stranding network coordinators determine who is closest and most readily available to respond to the sea turtle. When a sea turtle is found stranded on a beach, it is technically within the U.S. Fish and Wildlife Service’s jurisdiction. If found in the water the sea turtle falls under NOAA Fisheries’ jurisdiction. Often a response team will be made up of members from a number of different organizations.

Once the sea turtle is recovered, it is taken to a facility like the one in Galveston, where it is rehabilitated and later released back into the wild. “Most turtles we rescue from incidental capture in the recreational fishery have a pretty quick turnaround,” said Howell. “We can easily remove hooks and those turtles are released from the hospital within a week. Some turtles might need a little more recovery time, say 3 months, if surgical removal of the hook was required. Turtles that are admitted to the hospital with severe trauma can require a year or more to rehabilitate.”

One of the most beneficial partners along the upper Texas coast is the Houston Zoo, which provides pro bono medical services, including surgery on sea turtles brought to the Galveston facility.

“Dr. Joe Flanagan (Houston Zoo Chief Veterinarian) is always on call in case we have a turtle that needs immediate attention,” said Howell. “For example, the sea turtle may need a flipper removed if it’s a severe entanglement case. The Zoo covers all surgery costs.”

The Galveston facility is fortunate to have such a committed partner nearby because their daily workload can become overwhelming, especially during colder months. When winter approaches and temperatures drop, turtles strand more frequently as a result of a condition called “cold-stunning.” Cold-stunning occurs because sea turtles are ectothermic, meaning their body temperature is dependent on the surrounding environment. If caught in frigid waters for too long, they experience symptoms similar to hypothermia in humans. Without rescue, death is often imminent.

In particularly bad years, hundreds to thousands of sea turtles in the Gulf of Mexico and Atlantic Ocean can suffer from cold-stunning. “In 2010, they had over 4,000 animals cold-stunned in Florida,” said Howell. “In Texas, we had approximately 1,100 cold-stunned turtles 2 years ago. As the population recovers over the years, we’ve been seeing an increase in cold-stun events.”

“This past year, in early 2016, we only had a handful of cold-stunned turtles because there was not a drastic cold snap. But if we have a cold-stun event we might receive 50 turtles on one day,” said Howell. “We had turtles flown in from Cape Cod when they had over 1,000 cold-stunned turtles in 2014. We took 50 of them and at the same time we were having our own cold-stun event in the Gulf, so we had over 100 turtles in our hospital for a couple of months. Each turtle has different feed calculations and medical needs, so it was tough. Plus, we always have captive-reared turtles here at the Galveston facility and those numbers range from 350 to 400 turtles. We have to make do with what we’ve got.”

With only six staff members running the facility, it is an enormous responsibility.

Houston Zoo Conservation Impact Manager Martha Parker has been volunteering at the Galveston facility for 4 years, participating in weekly surveys with Howell and company. Over time, Parker’s close partnership with Howell led to an unexpected development: a creative opportunity in the form of the Houston Zoo’s very first comic book.

“Martha became very intimate with our program and day-to-day activities. She told me [the Zoo] was working on this comic book about sea turtles. I did not know I was the primary focus of the comic book until it came out,” said Howell with a laugh.

Parker explained: “The comic book was actually the idea of the Houston Zoo Executive Vice President David Brady. He has a knack for thinking of incredibly creative and engaging ways to tell the story of the Zoo and our conservation partners. It became apparent that Lyndsey and our own Dr. Joe would need to be major characters in the book, as they are real-life sea turtle superheroes. It made sense to highlight real people, doing the difficult work to save wildlife, and I’m happy they have gotten the recognition they deserve for their dedication to conservation.”

The comic book aims to educate Houston Zoo visitors about the ways they can help protect sea turtles through everyday activities and awareness.

“Conserving a species is no simple task,” said Parker. “And there is no singular method that will help us protect sea turtles. Rather, it is a wide variety of methods to engage our local community, connect them to their incredible diversity of species (like sea turtles), show them how they can be part of protecting wildlife, and create a local ethic that focuses on living sustainably with nature.

Getting buy-in from those people who live around sea turtles will be the only way to make any conservation program successful long-term. While many believe people are the problem for wildlife, they are also the solution, and we can’t forget to include them as we work to protect species.”

Howell and Parker are proof that you don’t need superpowers to be a superhero. Sometimes, all you need to save the day is a good heart, determination, and the support of strong, dedicated partners.

P.S. - You Can Help Protect Sea Turtles Too

Everyone can reduce plastic consumption by switching from plastic to reusable bags and bottles and by saying no to balloons (which often end up in the ocean and in the stomachs of sea turtles). We can all help out by being better consumers of ocean-friendly seafood, protecting beach and dune habitat, and using fishing methods that are considerate of other marine wildlife.

If you accidentally hook a sea turtle while fishing, report the turtle immediately. Howell recommends leaving the hook in until trained responders arrive—they will assess the turtle’s condition and take appropriate action. Hook removal can be stressful and cause further injury to the animal. Use large circle hooks with finfish bait to reduce chances of catching a sea turtle. Fishermen should also be sure to pick up their fishing line and remove as much debris from the water as possible. Look for monofilament recycling bins near your pier or beach and dispose of leftover line. Never touch or transport sea turtles unless the animal is drowning. If you spot a sea turtle stranded in the sun, do your best to provide some shade to keep it cool until help arrives.

Want to see some sea turtles up close? Sign up for a tour of the Galveston Sea Turtle Facility.

Last updated by Office of Communications on May 17, 2022