Sea turtle species you might encounter in Alaska and steps to protect them. 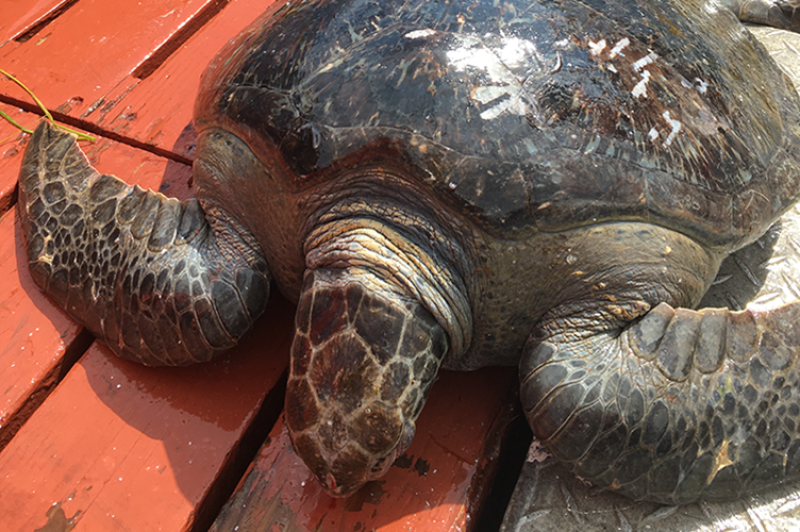 A fishing crew in Alaska rescued this green sea turtle from getting caught in a net just south of Prince of Wales Island on Aug 5, 2020. Photo credit: Ben Dolph.

Most people associate sea turtles with warm, tropical destinations. You might be surprised to learn that some sea turtle species can also be found in the frigid ocean waters off Alaska.

Seven sea turtle species inhabit our oceans. The six found in the United States are protected as endangered or threatened under the Endangered Species Act. Significant threats to global sea turtle populations include:

In Alaska, the cold water is a threat to sea turtles because they are reptiles and do not regulate their own body temperature.

In Alaska, four species have been reported to NOAA Fisheries over the last six decades:

In 1963, Dr. Bruce Wing began collecting reports of sea turtle sightings for NOAA’s Alaska Fisheries Science Center. The NOAA Fisheries Alaska Regional Office has continued these efforts, We maintain a record of free-swimming, dead, or entangled sea turtles across the coastal areas of the Gulf of Alaska. 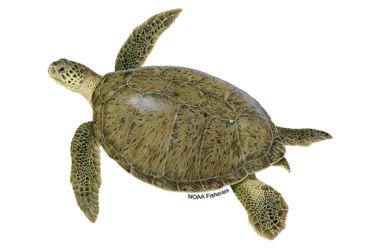 The green sea turtles that visit Alaska are classified as threatened. The green turtle is the largest hard-shelled sea turtle species, weighing up to 400 pounds, reaching 4 feet in length, and possibly living up to 70 years or more. A green turtle’s carapace (protective top shell) is most commonly dark brown, gray, or olive with a yellow to white plastron (bottom shell. It has scutes (bony external plates or scales) running down the middle and four on either side. It has a serrated beak on the lower jaw and two large scales between the eyes. The green turtle is named due to its primary diet of seagrasses and algae, which tints its cartilage green. Green turtles are found globally in tropical and subtropical waters throughout the year. They nest in more than 80 countries and can migrate into cooler temperate and boreal waters in warmer weather. Between 1976 and 2020, 19 green sea turtles were reported in Alaska, most occuring between October and December. 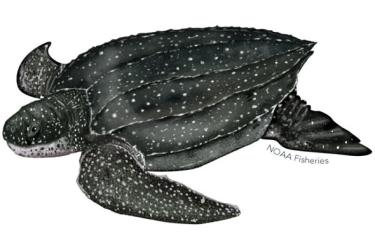 The leatherback turtle is classified as endangered. It is the largest living sea turtle, weighing up to 1,000 pounds, reaching 6 feet in length, and possibly living up to 50 years or more. The leatherback is the only sea turtle that lacks a hard shell and scales. Instead, the carapace is composed of a flexible layer of dermal bones underlying tough, oily connective tissue and smooth skin. The body of a leatherback is barrel-shaped and tapered to the rear, with seven longitudinal dorsal ridges, and is almost completely black with variable spotting. It has pointed tooth-like cusps and sharp-edged jaws perfect for feeding on gelatinous zooplankton like jellyfish and salps. Leatherback turtles are found worldwide in tropical and subtropical waters throughout the year. They can migrate into cooler temperate and boreal waters during late summer and early fall. Leatherbacks are highly migratory, some swimming more than 10,000 miles a year between nesting and foraging grounds. They are also accomplished divers with the deepest recorded dive reaching nearly 4,000 feet—deeper than most marine mammals. Between 1963 and 1993, 19 leatherback turtles were reported in Alaska waters, most occuring in July and August. 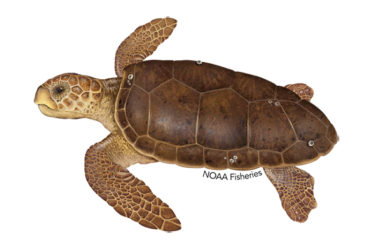 Loggerhead turtles are found worldwide, and have nine distinct populations, all of which are listed as either threatened or endangered. They are the most abundant species of sea turtle that nests in the United States, and can weigh up to 350 pounds, reach 3.5 feet in length, and possibly live up to 70 years or more. A loggerhead’s slightly heart-shaped carapace is reddish-brown with a pale yellow plastron with yellow-bordered scutes. Named for its large head, it has powerful jaws suited for feeding on a variety of food including whelks, conch, jellyfish, insects, gastropods, and algae. Loggerhead turtles are found around the world in tropical, subtropical, and temperate waters throughout the year. On rare occasions, they migrate into cold boreal waters, particularly during El Niño weather events. Only two loggerhead sea turtles have been reported in Alaskan waters. 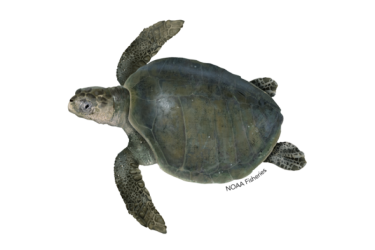 The olive ridley turtle is classified as threatened.although the Mexican Pacific coast nesting population is currently listed as endangered.

It is smaller than the other sea turtles, weighing up to 100 pounds, reaching 2.5 feet in length, and possibly living up to 50 years. An olive ridley’s heart-shaped carapace is olive to grayish-green with five to nine scutes. It is omnivorous, feeding on fish, crustaceans, mollusks, jellyfish, salps, and algae.

Olive ridley turtles can nest by themselves— or in large groups. Before mass nesting, the female turtles gather in large groups offshore of nesting beaches.  Then, all at once, vast numbers of turtles come ashore to nest in what is known as an “arribada,” which means “arrival” in Spanish. During these arribadas, hundreds to thousands of females come ashore to lay their eggs. At many nesting beaches, the nesting density is so high that previously laid egg clutches are dug up by other females while excavating the nest chamber to lay their own eggs.

Olive ridley turtles are distributed worldwide in tropical and subtropical waters throughout the year, and sometimes migrate into boreal waters during warmer weather. Only four Olive Ridley sea turtles have been reported in Alaska waters, with the last report occuring in July 2004.

What Can We Do To Protect Sea Turtles?