As dogfish populations recover from overfishing, questions remain about how much Atlantic cod they are eating and its impact on the struggling cod population. Innovative genetic techniques help shed some light on the situation. 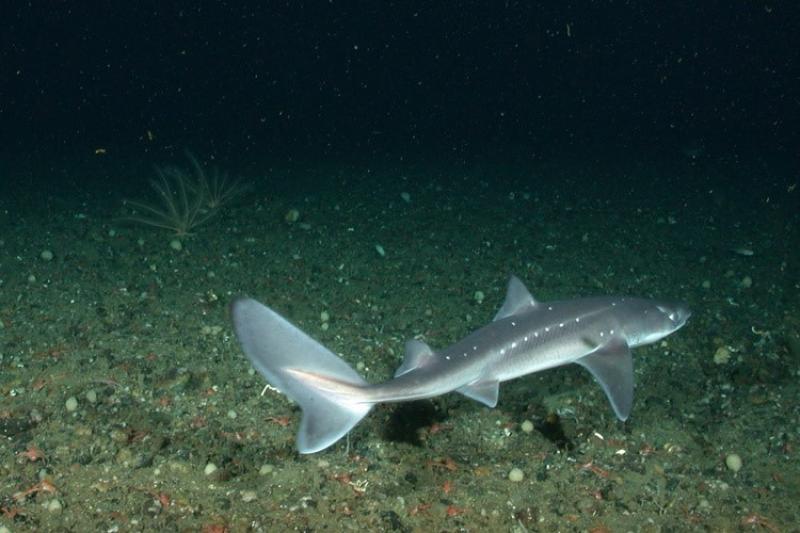 Spiny dogfish have little consumer demand in the U.S. They are a major seafood export to Europe, where they are commonly used as the fish in "fish and chips".

Conventional observations show that spiny dogfish in the western North Atlantic rarely eat Atlantic cod. However, some believe the rebuilding dogfish populations are limiting depleted cod numbers by competition or predation. To find out what is going on, NOAA Fisheries scientists looked to genetic testing to confirm cod presence in dogfish stomachs.

To get the samples they needed, scientists at the Northeast Fisheries Science Center asked local fishermen for help. Commercial fishing boats from New Bedford, Gloucester, Plymouth and Newburyport in Massachusetts stepped up.  All participate in the Study Fleet, a program in the center’s Cooperative Research Branch. Spiny dogfish were collected on 15 fishing trips during normal trawling operations between May 2014 and May 2015 in the Gulf of Maine and on Georges Bank.

“This was an excellent example of how cooperating fishing partners supplied fish for a pilot study of interest, and have helped advance this field of study,” said Richard McBride, chief of the center’s Population Biology Branch and a co-author of the study. “We were able to demonstrate that identifying cod in predator stomachs with environmental DNA works. It let us show fishermen that these innovative laboratory techniques can work on samples collected in the open ocean."

Study findings, published in Ecology and Evolution, reveal rates of interactions between cod and spiny dogfish are higher than previously thought.

“Although not directly comparable, the number of dogfish stomachs with cod detected was higher than that observed by conventional surveys,” said Brian Smith, a food habits researcher at the science center and a co-author of the study. “This is likely due to several potential mechanisms, ranging from active predation and scavenging during fishing operations to dogfish and cod sharing common waters. This also illustrates the high power of detection using molecular versus visual methods."

Dogfish primarily eat other fish, but also jellyfish, squid and bivalves in some locations. Cod as dogfish prey is rare. Only 14 cod have been visually observed in the stomachs of 72,241 dogfish collected by the science center’s bottom trawl surveys from 1977 to 2017. This suggests low predation rates on cod. However, small cod are much more likely to be well-digested when the samples are taken. If dogfish have eaten these smaller cod, it is difficult to identify the species by observation alone. Molecular-level studies, using DNA, offered some answers.

In the recently published study, researchers examined the stomach contents of 295 dogfish samples collected throughout the year. Using the conventional visual method, they observed 51 different prey types and nearly 1600 individual prey items. NOAA Fisheries scientists paired these visual observations with a laboratory technique (real-time polymerase chain reaction, or PCR) to detect small amounts of cod DNA. Using this technique, researchers examined 291 of the 295 available samples and detected cod DNA in 31 of them.

Fishermen have also reported seeing dogfish eating cod during fishing operations. Sometimes this is dogfish actively foraging on live prey. Other times it is due to dogfish depredation ­­­-  dogfish eating the fish in the net before it can be brought aboard the fishing vessel. In this study, 50 percent of the sampling trips where cod was eaten indicate scavenging by spiny dogfish.

Members of the study fleet who helped collect the samples recognize the value of their participation in the study.

“It's always good to have more information on the species that live in our waters. I'm happy to contribute to work that furthers our understanding of these populations, especially in regard to cod,” said Captain Jim Ford of the F/V Lisa Ann III from Newburyport. “I know there are some different opinions on what role dogfish play in the ecosystem, so the more data we can provide to inform that, the better.”

While the findings suggest higher interaction rates between dogfish and cod than previously observed, further study is needed to determine just how much cod dogfish eat. Studies are ongoing to better integrate factors such as predator-prey relationships into stock assessment models used to estimate both current and future fish population numbers.

Researchers say the next step is to use a statistically robust sampling design to examine a population-level assessment of the effects of dogfish predation on cod population size. Estimates of spiny dogfish digestion rates, and ways to consider dogfish scavenging during fishing operations, are also needed.

“The Northeast Fisheries Science Center has the laboratory facilities to detect cod DNA in predator stomachs, and a bottom trawl survey that is designed to measure population level effects among groundfish,” said McBride. ”We just need to put these two pieces together to estimate the effect of spiny dogfish predation on Atlantic cod. Easier said than done, but all the pieces are there."