Spotlight on Marine Forensic Science at the NWFSC

Feature Story |
West Coast
What is Forensics? Forensics is the application of scientific methods to answer questions within a legal setting. When any science is presented in a court of law, the level of scientific rigor must be higher and better documented than in regular research laboratory settings. Analyzing forensic evidence requires absolute security and an unbroken chain-of-custody to be admissible in court.

Many of you may be familiar with the popular CSI television series, a police drama showing how investigators use physical evidence to solve various murders. But did you know that NOAA has a forensics laboratory and law enforcement officials that help link genetic evidence to crimes against marine wildlife?

For the past 12 years, NWFSC’s Seattle laboratory has had a dedicated Forensics Group that, together with the NOAA Fisheries Office of Law Enforcement, has analyzed genetic evidence for almost 100 civil and criminal investigations. These investigations are triggered by violations of our nation’s laws to protect fisheries resources, marine mammals, and endangered species, such as the Lacey Act, Endangered Species Act, Marine Mammal Protection Act, Magnuson-Stevens Act, as well as international CITES violations. 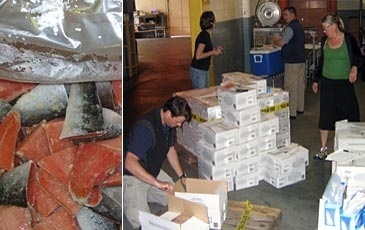 In 2007, the NWFSC’s Forensics Unit processed evidence in a case involving over 160,000 pounds of falsely labeled salmon with an estimated market value of $1.3 million. Office of Law Enforcement agents seized thousands of pounds of processed fillets from large seafood processor in Bellingham, WA. The NWFSC’s DNA analysis showed that a substantial portion of the product was mostly coho but misrepresented as Chinook salmon, a higher value species. The processor responsible for defrauding customers was fined over $300,000 and sentenced to a year in prison.

NOAA Fisheries is responsible for managing marine fish and mammal species in the United States, and the agency’s regulations are often species- or stock-specific. Identifying the exact species can be complicated if only portions of an animal, such as a salmon fillet in a freezer, or a piece of fur or shell made into clothing or jewelry, are available for inspection. It can also be difficult when protected and non-protected populations overlap during a portion of their life cycle, such as endangered salmon and other marine fish in the open ocean. When reference samples or databases are available, the NWFSC’s Forensic Group can use advanced molecular genetic tools to accurately determine the identity of a species and population, providing the necessary identification of a marine species (or stock) associated with the agency’s regulated activities.

In addition to protecting our biological resources, the NWFSC helps the NOAA Fisheries Office of Law Enforcement protect consumer interests. The agency helps ensure that the high demand for seafood doesn’t result in illegal activities. For example, “food fraud” can occur when a restaurant or seafood business substitutes a fish species of low economic value for a species of higher market value. Forensics improves the traceability of fish from the net to the plate and keeps illegal, unreported and unregulated (IUU) catch — about 20% of the world’s seafood catch — from entering the market.

Since an organism’s DNA is contained in most of the cells, the identity of a species can be determined from a wide range of samples, including fish fillets, canned fish, dried tissue, and fish scales. The NWFSC’s forensic scientist can extract DNA from very small samples, such as tissue cells from a fish hook, and from heavily processed material, such as tanned hides. NWFSC scientists use DNA sequencing technology, often referred to as genetic barcoding, for species identification. For population-level analysis, scientists develop databases of multi-locus genotypes, or DNA “fingerprints,” for each species of interest.

Partnerships are key to success

The Forensics Group is embedded within the NWFSC’s larger genetics research program, which has a long history of genetic monitoring of marine species, including salmon, rockfish, hake, and Southern Resident killer whales. The NWFSC’s genetics research program has 10 geneticists on staff with a wide range of research and expertise, and the Forensics Group is often able to request further assistance from this staff in response to Office of Law Enforcement needs. Since Center scientists are intimately involved in the major issues in the Pacific Northwest region — many times the policies are based on NWFSC research — the Forensics Group has access to both the biological and technical expertise needed to address enforcement issues and can assist Office of Law Enforcement agents with performing the necessary analyses.

On the species level, forensics scientists have been collaborating with the University of Washington’s School of Fisheries and Aquatic Sciences for the past eight years to develop a Forensic Voucher Collection for species identification. The effort generates DNA sequence data that are linked to archived, expertly identified specimens. These data are submitted to Genbank, the largest public DNA sequence database, and the Barcode of Life Database (BOLD), and the archived specimens are part of the permanent museum collection at the University.