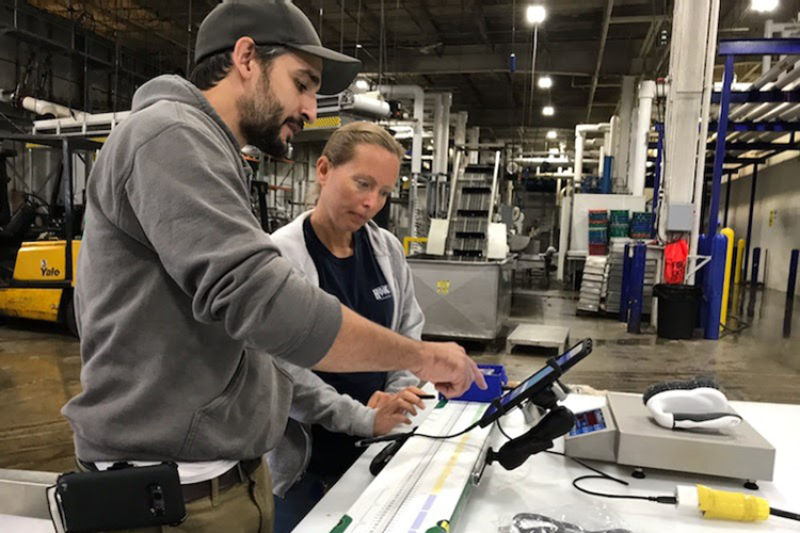 Researchers from the Northeast Fisheries Science Center have installed a new electronic data collection system at five shortfin squid processing facilities across the region. With a lot of squid available to measure, researchers hope this pilot project will show that processors can help increase the amount of real-time data on this relatively short-lived species. This information is needed to support good management of a burgeoning fishery.

The Squid Electronic Size Monitoring Pilot Project is new, and was developed by a team of science center researchers including:

This team worked alongside industry to design the system. The goal is to create a standardized data stream of northern shortfin squid size and weight provided by processors. The northern shortfin squid (Illex illecebrosus) is fast-growing and lives for less than a year. At any given time, there are multiple cohorts (groups of similarly aged squid) in the population with a wide range of body sizes and weights.

The project provides some shortfin squid processors with the tools to collect data on shortfin squid size and weights during routine processing operations. It consists of a software and hardware package developed by science center staff that includes:

The shortfin squid fishery is growing, so it is important to obtain a better understanding of the species. Researchers know that frequent, region wide size and weight sampling is required to gain a better understanding of the complex cohort and population structure of shortfin squid. This project holds promise for increasing available data to support long-term sustainability and maximize value for this commercial fishery, worth more than $27 million in 2019.

“Some Data” is Not as Good as “More Data”

Some of the shortfin squid’s population dynamics are poorly understood, but this could be improved with more data.

Traditional fish surveys in the spring and fall provide some data, but do not happen when and where shortfin squid are migrating. These animals typically inhabit the outer continental shelf throughout the summer months.

Data is also collected by the fishery, through vessel trip reports and through port sampling. These lack the fine scale and density required to characterize the dynamics of this short-lived species. This new project holds promise for filling the data gap. Collaboration between researchers, the shortfin squid fishing fleet, and processing companies has been essential to its design and implementation. The cooperation with industry has given researchers important insights into fishery operations and provided direct access to the data source: fresh squid.

When fishing vessels land at each processing facility, the system will be used to record paired mantle length and whole weight of individual shortfin squid. These data will allow scientists to better understand the size composition of shortfin squid cohorts and population while the fishery is open. This is important in advancing the assessment and management of this dynamic species.

Shortfin squid harvesters and processors helped researchers with scoping, designing, testing, the system, and will get their chance to collect data in the coming months.

Research projects like this one play a critical role in documenting rapidly changing dynamics of marine populations and promoting the long-term conservation of living marine resources.