Submerged aquatic vegetation is one of the most productive fish habitats on earth. We work to protect this important habitat, ensuring that it remains healthy and has a chance to thrive. 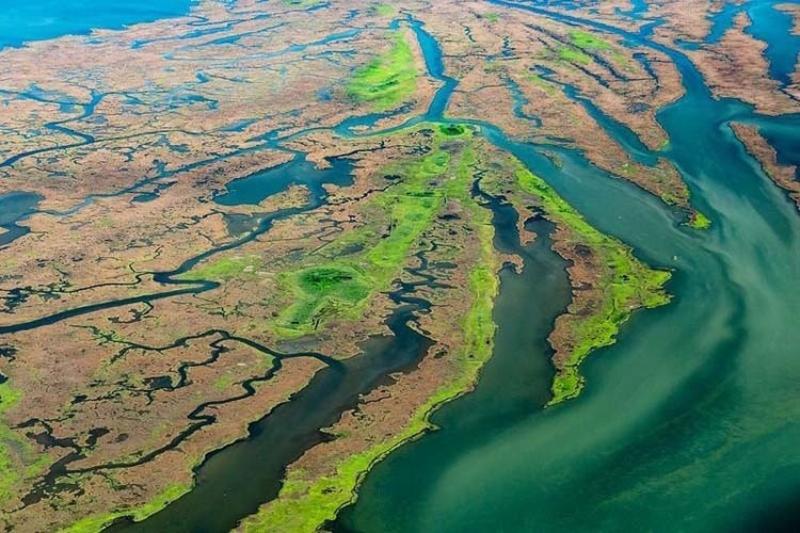 Imagine this: you’re swimming at your favorite beach and you feel something slide across your foot. You panic, but only for a moment, because you realize that what you were touching was just a long, spindly water plant. Sure, you may have seen such plants washed up on beaches, or maybe you have removed it from a boat as you left the water for the day. But have you ever stopped to think about what these plants actually do? It turns out, they actually support an entire ecosystem under the water!

The term used for a rooted aquatic plant that grows completely under water is submerged aquatic vegetation (SAV). These plants occur in both freshwater and saltwater but in estuaries, where fresh and saltwater mix together, they can be an especially important habitat for fish, crabs, and other aquatic organisms. SAV is a great habitat for fish, including commercially important species, because it provides them with a place to hide from predators and it hosts a buffet of small invertebrates and other prey. They essentially form a canopy, much like that of a forest but underwater. Burrowing organisms, like clams and worms, live in the sediments among the roots, while fish and crabs hide among the shoots and leaves, and ducks graze from above. It has been estimated that a single acre of SAV can be home to as many as 40,000 fish and 50 million small invertebrates! 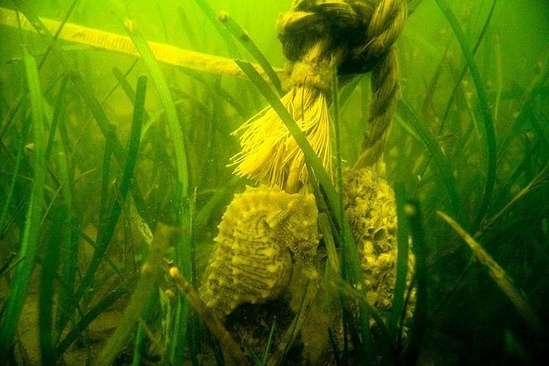 SAV in the Chesapeake Bay

One of the places we work to protect these aquatic plants—and other habitats important for fish)—is in the Chesapeake Bay (Maryland and Virginia). The Bay is home to several different species of SAV. They live in the relatively freshwaters near the head of the Bay and down to its mouth, which is as salty as the ocean. Approximately 90 percent of the historical extent of SAV disappeared around the mid-20th century due to poor water quality, coastal development activities, and disease. Since then, there have been major efforts to reduce pollution to the bay and help SAV reestablish in areas where it was historically found.

We regularly work with the U.S. Army Corps of Engineers to ensure that coastal projects avoid damaging this important habitat. For example, the Corps might propose to issue a permit to a private landowner to build a structure such as a pier or breakwater in SAV. We would then make recommendations to avoid these areas. If the areas are unavoidable, we advocate for different construction approaches to minimize impacts such as shading or filling.

Dead Zones Giving You Heartburn? Have an Antacid!

One amazing recent finding is that SAV actually changes the acidity of near-shore waters. A recent study in the journal Nature describes this phenomenon in the Chesapeake Bay. SAV located at the head of the bay reduces the acidity of water in areas downstream.

During the warm summer months in the Chesapeake Bay, there are many aquatic organisms respiring. This results in much of the available oxygen being consumed and leaving an excess of dissolved carbon dioxide. Another effect of all this carbon dioxide is that parts of the Bay become more acidic. This is stressful for many organisms especially those with shells like oysters and mussels.

That’s where SAV comes in. During the growing season, SAV absorbs dissolved carbon dioxide. With help from the sun’s rays, they turn that carbon into leaves, shoots, and roots much like other plants. In the process, oxygen is released into the water, as well as small crystals of calcium carbonate. They essentially behave as antacids as they flow into acidic waters downstream. This is a great example of how conservation of one resource can have cascading effects. SAV carbon filtration benefits commercial fisheries such as oyster aquaculture and, ultimately, the entire Chesapeake Bay ecosystem. 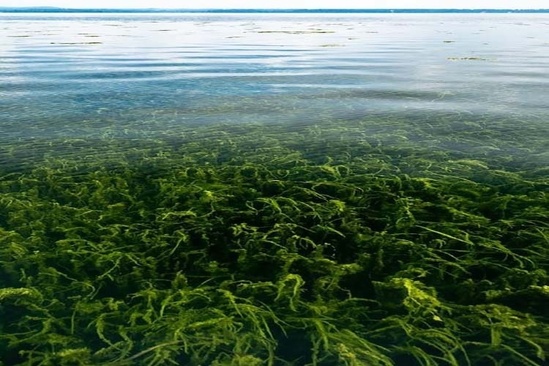 SAV as a Carbon Sponge

Increasing carbon dioxide levels in the atmosphere is also a major contributing factor in global climate change. There is a lot of interest in harnessing the power of our natural biological environment to soak up this excess carbon. SAV is an important piece in this puzzle. Aquatic plants are highly productive, which means they absorb a lot of carbon dioxide. The carbon captured by these plants has been termed “blue carbon” since it primarily occurs in the water.

Blue carbon has been receiving a lot of attention lately as scientists have discovered that aquatic plants are very efficient at storing carbon in sediments. They also keep it there over long periods of time. Studies have estimated that underwater grasses globally can store approximately 10 percent of the carbon in the entire ocean in the form of rich aquatic soils. Ultimately, this means that efforts to protect and restore SAV can also help to reduce the effects of climate change.

Take a Second Look at SAV

Maybe next time you feel a spindly plant brush your foot in the water, you won’t run away. Instead, dive down and see what critters may be hiding among the underwater grasses! You might be surprised to find a crab lumbering through the stems or school of young fish cruising through the green leaves. 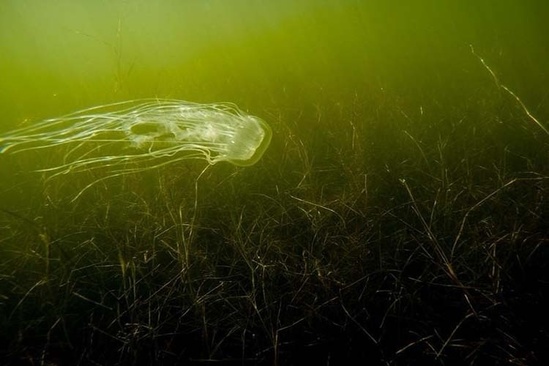 A sea nettle floats in front of SAV in the Severn River Sanctuary in MD. Credit: Will Parson/Chesapeake Bay Program

What You Can Do for Habitat

Everyone's actions affect habitat for fish and other marine life. Learn what you can do to help keep habitat healthy. 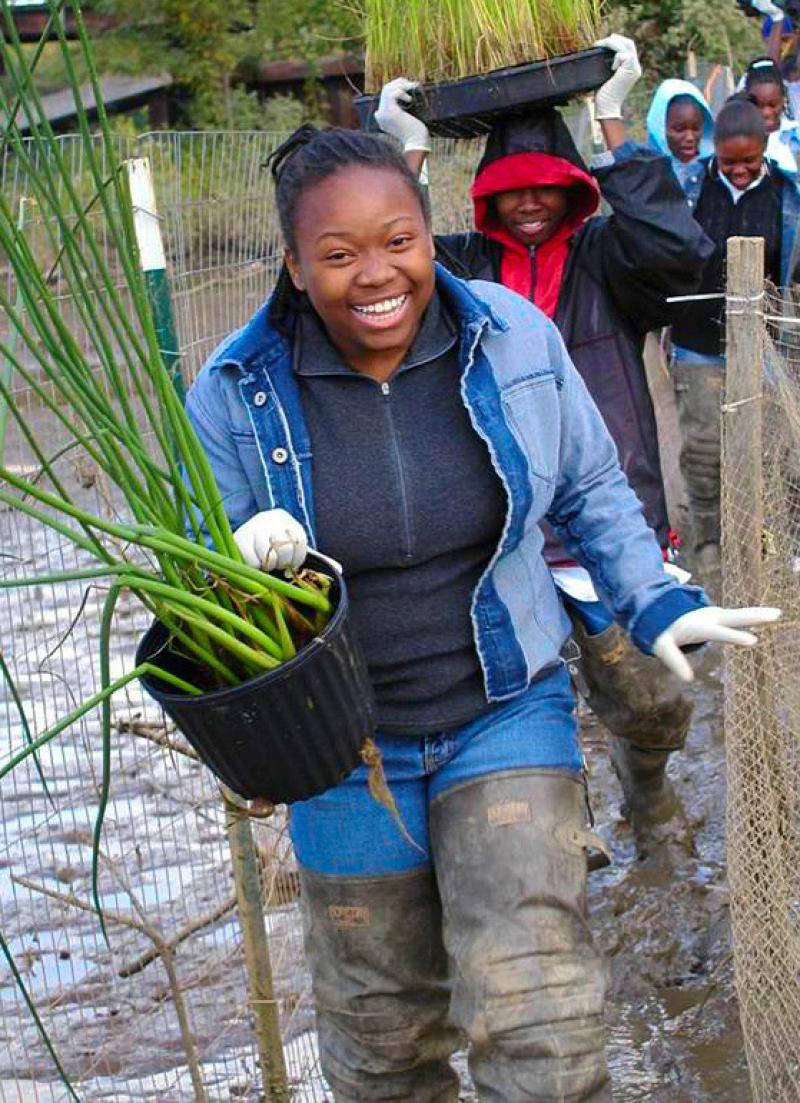 Last updated by Greater Atlantic Regional Fisheries Office on May 28, 2021